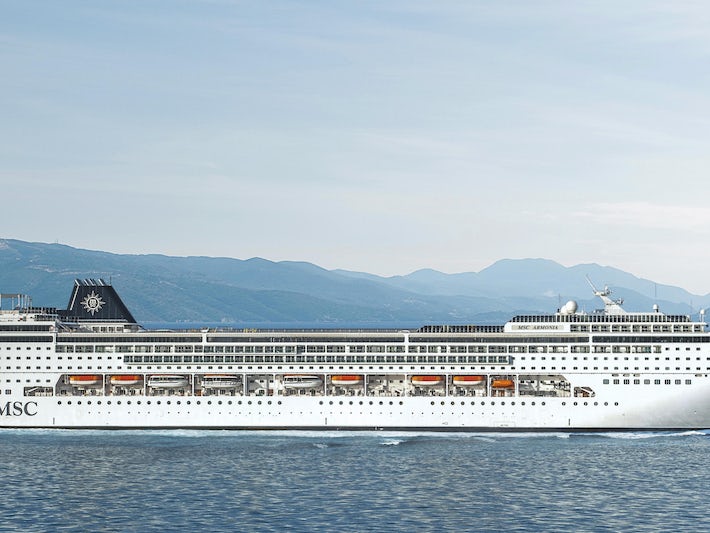 MSC Armonia has been sailing in the Caribbean for several years, but until recently, it primarily targeted Europeans; now it's drawing a North American crowd as well.

A decently sized ship at about 2,500 passengers, MSC Armonia is smaller than most modern mega-ships and feels cozier than you'd think. Similarly, despite it being an older ship, the decor feels comfortable, rather than passe; imagine a high-end chain hotel that's become pleasantly worn-in over the years.

One of the best things about MSC Armonia, especially for social cruisers, is its passenger makeup -- a real melting pot of the world, with dozens of nationalities represented and a plethora of languages heard onboard. No matter where anyone is from, though, everyone is onboard to have fun.

Cruisers have a real appreciation for the relatively small-scale size of the ship, which allows you, the crew and other passengers to get on a first-name basis quickly. Participation in group activities (from poolside aerobics to dance competitions) is overwhelming and the theater is packed at night.

MSC Armonia is also a particularly kid-friendly ship, packed with kids' clubs that benefit from brand partnerships including Chicco, the Italian baby care brand, and Lego, the well-known toy block manufacturer, both of which resulted in the creation of five separate onboard child care centers, kids' and teen clubs.

For those who want to cruise on a ship surrounded by English-speakers, it's worth noting that all the announcements onboard are made in several languages (English, Italian, French, Spanish and German), which can get tedious at times. That said, English is the first language on MSC Cruises ships and we never had difficulty communicating. Crew quickly learned our names and even our favorite coffee and drink preferences. Special requests were handled with aplomb, and we found service to be quite friendly, if sometimes slow.

Excellent entertainment options and fun that lasts late into the night

Not much dining variety and what there is, is often lackluster

Great for families and anyone looking for wallet-friendly fares

MSC Armonia features a truly cosmopolitan makeup of passengers from all over the globe. The rich mix of nationalities makes for an interesting and eclectic crowd, especially fun for extroverts looking to make new friends.

The ship also attracts a fair amount of families -- even when school is in session -- for its great children's amenities and clubs.

Daytime: Casual dress is appropriate on MSC Armonia for the majority of the cruise, including jeans and shorts in the main dining room.

Evening: On formal (or "gala") evenings, men should wear a suit or collared shirt and slacks, and women, a cocktail dress or other dressy clothing. Passengers who want a less formal dining experience on these nights can opt for the Lido buffet.

Not permitted: No swimwear or bare feet are permitted in indoor restaurants or buffets at any time.

Get MSC Armonia price drops
250,000+ people have entered their email

Find an MSC Armonia Cruise from $89

Where does MSC Armonia sail from?

Where does MSC Armonia sail to?

How much does it cost to go on MSC Armonia?

Good variety of drinks were available.The buffet was very good with lots of options but very busy.Read More
DrBS

The bad reviews about MSC are from Americans who are loyal to carnival, NCL and RCL. We are Europeans (from Ireland) and found MSC amazing and we have UK family who love it too.Read More
tara1308

I am also booked o the MSC Meraviglia for 4/12/20 for a 21 day TA. I'm looking forward to this cruise after the great experience on the Armonia!Read More
IsanTom