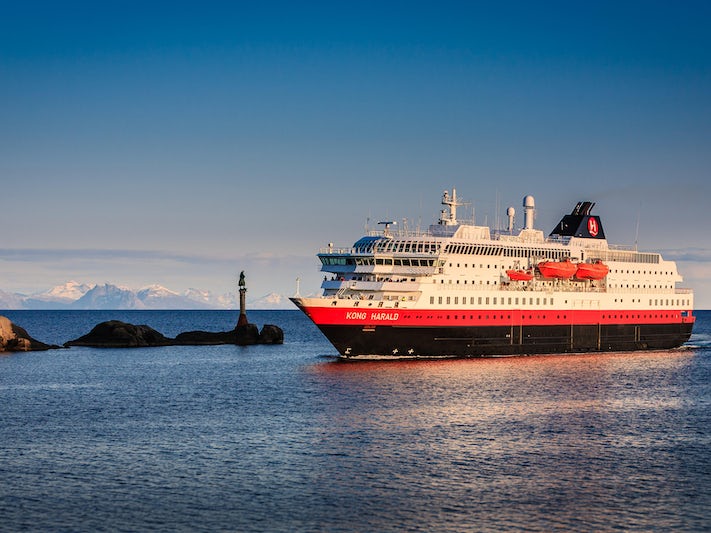 Kong Harald -- named after the current king of Norway -- is the first of Hurtigruten’s ships to have undergone a total ship refurbishment; part of a $100 million investment which will see a total of four of the line’s ships renovated this year, including Polarlys, Nordkapp and Nordnorge.

The revamp of Kong Harald is huge news for both the line and the locals -- a number of Norwegians were reputedly upset at its new modern décor -- but Hurtigruten hopes the refreshed look will attract a younger crowd; a belief that is likely to be realised. Kong Harald is now unlike any other cruise ship on the market. It has a fresh and light "Scandi chic" feel. Those familiar with the ship from before will remember darker carpets and beige walls -- these have been replaced with shades of blue, white and lighter wall colours which lift the rooms, and give the ship character and personality. As with the public spaces, the restaurants have been revamped, moving away from the traditional large round tables and dark walls and carpet familiar with older ships.

First timers, new to Hurtigruten customers and younger passengers looking to explore Norway by ship will likely enjoy the nod to a modern take on cruising. Those that prefer a more conservative décor may not be such fans, but there is now a real focus on paying homage to Norwegian culture. Reminders of the country’s heritage and folklore are everywhere -- from the many photographic snapshots of local life adorning the stairwells and restaurants, to the tapestries in the café and the trolls in the shop.

Kong Harald might have undergone changes, but its itinerary remains the same -- it sails a set route between Bergen and Kirkenes year-round, with excursions altering according to the season. It is one of 11 Hurtigruten ships serving the Norwegian coast, with its voyages often encountering the northern lights, despite Bergen's relatively southern position.

The ship's new light-filled wider open spaces make the ship seem spacious, even when sailing at full capacity. It is the ever-changing landscape outside that remains the focal point though. Public spaces have tables and seats positioned to watch the view, which lends a social atmosphere, while the Explorer Lounge on deck four at the front of the ship -- which has been turned into a bar area -- offers panoramic views.

The staff are incredibly friendly -- guest services is manned 24/7, and all speak at least two languages, predominantly Norwegian and English, although German is also spoken. Their friendliness is infectious, and the crew often laugh and joke with the guests.

Get Kong Harald price drops
250,000+ people have entered their email

The onboard currency is Norwegian, and everything is priced in Norwegian Krone (NOK). Room key cards also function as payment cards and those who wish to can pay for everything when they check-out, using a credit card rather than cash.

Passengers on our voyage seemed largely impressed with the refreshed Kong Harald -- the only frustration was that the refurbishment stopped at deck three, meaning those in lower grade cabins (deck three and two) can only enjoy the new Norwegian décor outside of their rooms.

Kong Harald attracts a slightly older crowd, although onboard staff say this is changing, and the new modern décor is likely to continue this trend. Most passengers tend to be 50 plus couples and adventure seekers, but recent sailings have apparently seen a number of families onboard, while local Norwegians who use the ship as transport to the next port sometimes bring their young children.

In addition to locals, the ship's audience is largely comprised of UK and German passengers, with ship announcements given in all three languages.

Lectures tend to be split into two languages -- German and English -- and given in two separate conference rooms on deck seven.

Norwegian's are known for their laid-back attitude, and this is reflected in the ship's dress code, which is outdoor-chic. Guests can, and sometimes do, dress up for dinner, but it tends to be more smart-casual -- think shirt and trousers for men and smart top and trousers for women rather than dinner jackets and dresses. Those that prefer to remain in their fleece won't look out of place, though; as one Hurtigruten staff member told me: "It's perfectly fine to wear the fleece that you will watch the northern lights in to go to dinner."

Warm clothing in the day -- and night -- is a must. Those wanting to spend hours hunting the northern lights will need to be wrapped up in thermals and ski jackets as the night air can be bitter, especially the further north the ship sails. Even in the day, the wind was harsh on deck when we travelled, despite it being April, and several layers are recommended. Walking boots are also worth bringing, as some excursions offer hiking. And don't forget to bring your swim gear -- fas Kong Harald has two Jacuzzis installed at the rear of deck six.

Where does Hurtigruten Kong Harald sail from?

Where does Hurtigruten Kong Harald sail to?

How much does it cost to go on Hurtigruten Kong Harald?

Really the most beautiful voyage in the world

Excellent customer service in all areas