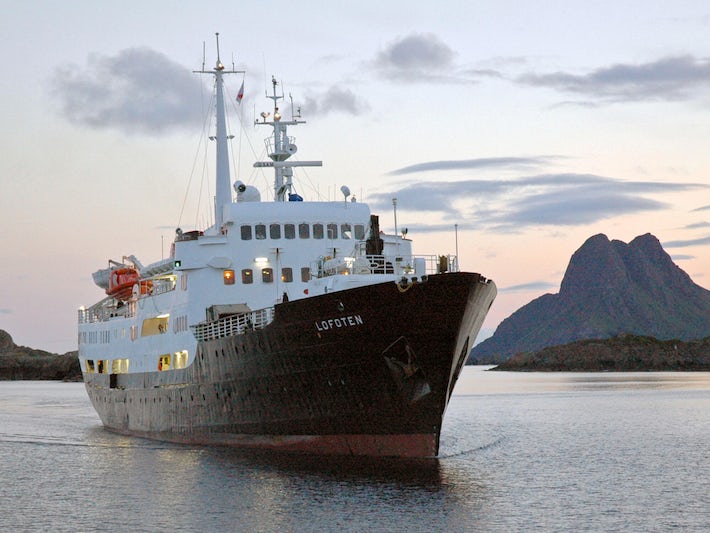 MS Lofoten, named after the chain of islands off the northern Norway coast, is a much-loved time machine built locally five decades ago. The ship and its two sisters were the last ships designed for Hurtigruten as break-bulk, lift-on, lift-off cargo-passenger ships. All subsequent ships were built for roll-on, roll-off cargo handling. Therefore, the ship's loading and unloading procedures are picturesque reminders of the way freight used to be handled, with fork-lifts maneuvering wooden pallets laden with food, beverages, building materials and furniture for crane operators to swing onboard and lower into the deep forward hold. Oversized cargo is placed on the open deck.

The ship's public spaces echo a small country hotel with wood paneling, brass railings, plush carpets, polished wooden floors, and comfy armchairs and sofas. Original oil paintings illustrate Norwegian coastal scenes and the fleet of ships that came before. Lofoten is cozy, well maintained and spotlessly clean. Only its black hull is a bit battered, the result of many thousands of dockings at stone-hard town wharves. The 32-member staff and crew are all Norwegians, most of whom speak excellent English, and passengers are generally pleased with the onboard service.

Most cabins are tiny, with upper and lower berths. Less than half have private bathroom facilities, and slightly more than half are outsides with portholes instead of windows. That combination might scare off the majority of modern travelers, but a small percentage simply does not mind the cramped cabins because the ship offers a working-ship experience unique to European waters.

Hurtigruten offers daily departures year-round with a fleet of 11 ships, and the majority of passengers on Lofoten specifically choose the ship for its onboard ambience and heritage. The other ships in the fleet are much larger and more modern, have more efficient "roll-on, roll-off" cargo handling and boast far better, bigger and more uniform twin-bedded cabins with full private facilities. Most passengers will want to book one of the newer ships, so it leaves Lofoten to the passengers drawn to its considerable, though old-fashioned, charms. These include cozy, wood-paneled interiors; the ship's small size and lower passenger count; traditional, crane-loaded cargo handling; long-serving crew and likeminded fellow passengers.

Another caveat is that the ship does not have fin stabilizers, so some rolling may occur during stretches of the coastal trip not protected by barrier islands. This will happen mainly just north of Bergen, heading out to the Lofoten Islands and rounding the North Cape en route to Kirkenes, the turnaround port.

Until a new ship is ordered and delivered, Lofoten will remain in Hurtigruten service, catering to a niche market of ship aficionados who come specifically for this ship's genuine link to the past. Its preservation is assured, as it's a Norwegian historical monument.

The ship attracts an international mix; Norwegians come aboard to travel point-to-point and to attend onboard conferences, while Germans and other Europeans, Brits, Americans and Australians come for the longer sailings. Tour groups do not book this ship, but Lofoten-lovers come back again and again. Most are well-traveled and sophisticated, yet unpretentious individuals, content to enjoy the spectacular scenery and picturesque communities. Many will be able to speak excellent English. The average passenger is older than 50, and families are few and far between. However, one of the charms of these voyages is that the passenger load changes often with point-to-point travelers embarking and disembarking along the way.

There is no dress code, so passengers dress casually and in layers depending on the time of the year. Jackets and sweaters are de rigueur year-round.

What a wonderfull journey!!!

I did the excursions: breakfast at the Artic Circle, horseriding at the Lofoten and the RIB boat with the midnightson :-) Very nice!!!Read More
DianaJanssen

Having previously sailed on the Midnastol there is no comparison with the Lofoten but the price was the same without the facilities.Read More
FleaRowe

Service in a time of dufficulties

I read that this year is the ship’s last year of sailing and it was the last time to experience a different type of cruise.The ship is stylish and whilst old still offers a comfortable, low key holiday.Read More
florencesm