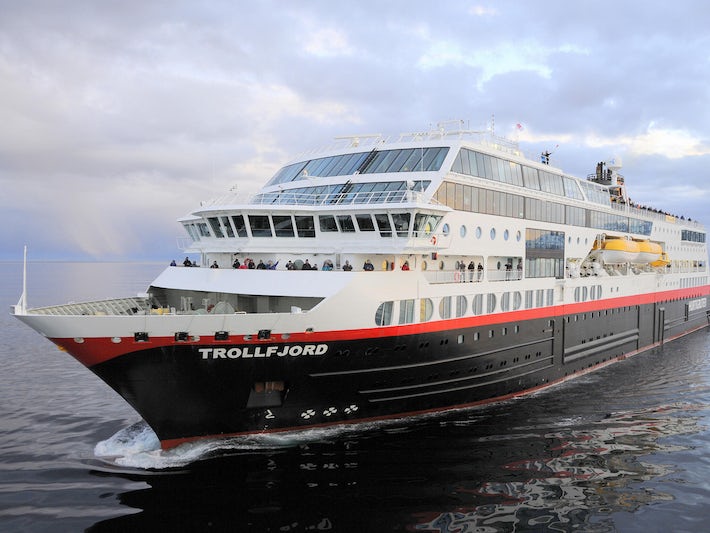 Some ships aim to keep passengers entertained 24/7 with everything from midnight pizza buffets and rock-climbing walls to casinos and all the predictable bells and whistles. Trollfjord, however, is not one of them. Yet, with Norway's spectacular coastline and colorful villages making nonstop scenery the star of a cruise aboard this ship, a cruiser of a certain sort will most likely not miss the usual cruise ship trappings.

Trollfjord joined Hurtigruten's fleet in 2002 and belongs to the line's Millennium class of ships -- the most modern ships in the fleet. Of Hurtigruten's 11 vessels, Trollfjord and her sister vessel MS Midnatsol are the two largest plying the coastal route. As such, they're also the most comfortable, offering passengers the most space to spread out onboard, as well as signature features like the two-tiered Panorama lounge and separate Concierge area on Deck 8, where the top suites -- replete with bay windows or large balconies -- are found.

Trollfjord plies the Norwegian coastal waters 365 days a year, transporting passengers and goods to remote coastal villages tucked between the fjords and delighting pleasure passengers with glimpses of coastal life and world-class landscapes. Cruises start in Bergen and end up 1,500 miles north in the town of Kirkenes, near the Russian border, before making their way back down the coast and doing it all over again. Highlights include traveling through the beautiful Lofoten Islands under the glow of the midnight sun or the northern lights and a visit to North Cape, the northernmost point in Continental Europe.

On its route north or south, Trollfjord makes a minimum of three stops per day and sometimes as many as seven. But some of the stops you'll hardly notice, as you're often in port for less than an hour. In the more interesting coastal towns -- places like Trondheim, Alesund and Tromso, for example -- you'll have ample time to hop off the ship to explore the town by foot or with a guided tour, or take part in a shore excursion. Along the way, announcements over the PA will alert you during the winter months if the northern lights are doing their thing. (When you're sleeping, you can opt to turn the PA system in your cabin on or off, as the announcements sometimes come in the middle of the night.)

And while the ship is constantly boarding and offloading new passengers (and cars) during your cruise, you'll hardly get the impression that you're on what's essentially a luxury ferry. Panoramic viewing areas surrounded by glass let in lots of light and offer magical views, and the use of light-colored Norwegian woods and natural stones creates a feel that's at once very austerely Scandinavian, yet bright and comforting, too. The ship's artwork is contemporary and on the minimal side, with the spotlight put on Scandinavian artists. Oil paintings onboard by Lofoten artist Kaare Espolin Johnsen depict iconic Norwegian scenery, and Viking-era scenery and graphics mixed with photographic prints by Oslo artist Morten Haug, found in cabins, are more contemporary. Sculptures in granite in metal decorate the atriums.

Most of Trollfjord's staff are Norwegian, and service is efficient and friendly, without the over-the-top attentiveness of the big cruise lines.

There's plenty of down-time (some passengers might say too much) for sinking into a chair and curling up with a book while watching the grand views outside. Limited passengers and an efficient debarking system mean it's easy to hop on and off the ship several times a day to get your land legs if you're so inclined. The bottom line is that this is a cruise ship that will appeal to travelers who prefer expedition-style cruises over the floating party ship vibe.

It's considered a must for most Norwegians to cruise aboard Hurtigruten on the coastal route at least once in a lifetime. You'll see many older Norwegian couples celebrating big anniversaries, such as 25 and even 50 years. The passengers are predominantly European, with a heavy dose of Scandinavians, Germans and Brits. From April to October, during the time of the midnight sun and warmer temperatures, it's mostly one-way passengers onboard for the spectacular sightseeing on the route from Bergen to Kirkenes. In the winter months, it's not uncommon to find conference groups onboard for several days at a time since rates are lower than they are during the summer. Port-to-port traffic is common throughout the year. The leisure passengers tend to be well-educated and in their 40's or older. All announcements onboard are made in Norwegian and English, and they're sometimes repeated in German and French, too.

Hurtigruten never imposes a dress code on passengers, and the ambience onboard is always kept casual. But European casual has a different meaning than American casual. Since the passengers are mostly European, people are usually quite dapper (read: you're not going to see a lot of flip-flops and sweatpants among this crowd). For daytime excursions, you'll want to dress in layers, with a warm and hopefully water-resistant outer shell. Meals are informal affairs, though people tend to dress a little more sharply for dinner than breakfast and lunch, when they're usually clad in their touring gear. Leave the fancy dresses and suits at home, to be sure. Two pairs of closed-toe shoes -- one for nature excursions and another for being comfortable indoors -- should do the trick.

Get Trollfjord price drops
250,000+ people have entered their email

Where does Hurtigruten Trollfjord sail from?

Where does Hurtigruten Trollfjord sail to?

How much does it cost to go on Hurtigruten Trollfjord?

Blown Away by Crew and Vessel

I sailed from KKN to TRD with MS Trollfjord and at first thought i booked too many excursions and would not be able to enjoy the vessel. But my god I was wrong.Read More
Judgerson

The excellent expedition team fulfilled this wish more than perfectly.And of course you can go hiking with the expedition team.Read More
PolarPrincess

Fantastic Views on a Sunny Day

As with all excursions organised by a cruise company they are expensive and not all are as good as their advertising suggests.Meet the Vikings was not good - too long on the coach for what there was at the end.Read More
congy