Independence of the Seas Dining 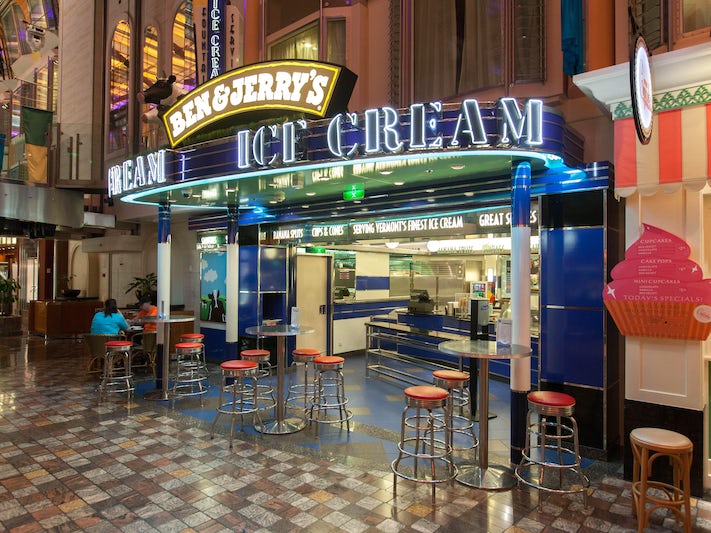 Independence of the Seas offers over a dozen restaurants. Overall, the quality of food was at best variable, with free dining really not coming up to a decent standard in the main dining rooms and Windjammer Marketplace. However, the dining experience and service levels in the specialty restaurants, in particular Chops Grille and Izumi, is generally high and it's worth a splurge at one if you're on a seven-night cruise.

There are multiple drinks station scattered throughout the ship’s free restaurants, but the only drinks included in the cruise fare are tap water, juice, coffee and tea (including iced tea). All restaurants on the Independence of the Seas offer rather extensive drinks menus, but even beer prices are high (and don’t include the 18% mandatory gratuity), so if you like to indulge, getting a drinks package is highly recommended. Drinks plans include, among others, the Deluxe Drinks Package, which offers unlimited alcohol, and the Refreshment Package for unlimited non-alcoholic drinks.

Independence of the Seas Free Restaurants

Romeo and Juliet, Othello, King Lear (Decks 3, 4, 5): The vast, three-deck-high dining room harks back to the classic days of cruising -- beautifully decorated and designed; it makes the evening meal into a real event, especially on formal nights and if you are situated toward the middle where you can look up or down and really take in the size of the room.

Each deck is somewhat randomly named after a Shakespeare play, with play-specific decor to match. The main dining room on Independence of the Seas is open for breakfast, lunch and dinner, though daytime meals, which are open-seating, are limited to Romeo and Juliet, and there's rarely a wait for a table.

At breakfast, a standard American menu offers cruise basics, from eggs Benedict and pancakes to granola and omelets. There's always a special; chocolate-chip pancakes and almond-crusted French toast are among them.

At lunch, there is a buffet setup in Romeo and Juliet for the midday meal, but only on sea days. It features a make-your-own-salad bar and a wonderful antipasti selection for those who want light fare. It's a terrific choice if you want a quick lunch in the quiet and elegant atmosphere of the dining room, and it's one of the better lunchtime offerings for vegetarians.

There is also a menu of lunch entrees, featuring hot dishes, soups, salads, sandwiches and desserts.

For dinner, passengers can choose between standard two-seating arrangements or My Time Dining, a flexible option where you choose your own dining time each day in the King Lear Restaurant. Either way, the food's the same, and largely, so is the ambience. What you give up with My Time Dining is the chance to have the same waiter and tablemates every night -- but the service is exceptional, no matter where you sit. Dinner in any of the three main restaurants is a lovely, elegant affair.

You can pre-reserve My Time Dining online, but if you wait until you embark, you must choose My Time on the first day by reporting to the dining room on Deck 5, and you can't switch between traditional seating and the flexible option during the cruise.

Menus offer a list of starters, which might include eggplant and Kalamata olive tartare, a Spanish tapas plate, pan-seared scallops and a soup selection. Entrees might include a chicken dish such as a schnitzel, meat (lamb or beef) such as beef Wellington and a fish dish like battered-cod fillet with scallops or pan-seared halibut. When the ship is U.K.-based, expect a curry dish, too. There's also a small "Classics" selection (available every night), which includes French onion soup, escargot and a king prawn cocktail to start and New York strip and spaghetti Bolognese as mains.

On the menu all of the dishes sounded mouth-watering, but we found the reality to be disappointing. It was clear most had been cooked hours before and been sitting around since. The steak, for instance, was tough and tasteless with a sorry selection of tepid fries and tiny carrots, the poorest we have eaten in an MDR on any cruise. Portions, too are measly: The "Royal" seafood salad is anything but: It came with the smallest shrimp and tiniest portion of lobster we have ever encountered in a seafood salad; it was more like a slaw with seafood flavoring. The French onion soup was watery and tepid and the puff pastry was the size of a postage stamp.

There are a number of upcharge options, including whole Maine lobster, Surf and Turf, and the "Chops Grille filet mignon" cooked perfectly to order and accompanied by a better quality mashed potato side than the usually dry version that come with regular main courses.

Desserts include Key lime pie, ice cream or souffle, apple pie and New York-style cheesecake, which were on the whole tasty.

Menus include notes indicating gluten-free, lactose-free and vegetarian dishes, but note there is not a vast selection.

Windjammer Cafe (Deck 11): The food quality here was generally good for cafeteria-style fare and was best when we stuck to the basics such as pasta dishes, grilled chicken and pizza. Off to the side of the Windjammer on Independence of the Seas’ Deck 11 is Jade Sushi, an Asian-themed buffet. As well as a limited selection of sushi (only available in the evening), you'll also find Chinese, Thai and Vietnamese dishes on the Jade menu, including stir-fried beef and various Asian salads and spring rolls. Food aside, somewhat disappointing is the fact that there's no outdoor seating in the Windjammer. (The room stretches all the way to the back of the ship.) It would be nice if the ship had a casual (free) poolside grill. Windjammer is open for breakfast, lunch and dinner.

Sorrento's (Deck 5): Sorrento's serves thick, doughy pizza along with antipasti and Italian desserts. (The tiny tiramisu is divine.) It's open from lunch until late.  Gluten-free pizza is available upon request.

Cafe Promenade (Deck 5): Cafe Promenade is the Independence of the Seas' only 24-hour restaurant, and offers breakfast pastries, mini-sandwiches and desserts. It also serves specialty coffees (for a charge).

Sprinkles (Deck 11): You can snack on ice cream at this pool-adjacent self-serve ice-cream machine.

Independence of the Seas A La Carte and Specialty Restaurants

Aside from a wide range of free dining venues, Independence of the Seas offers a number of specialty restaurants and a la carte options, none of which are included in the standard cruise fare. Food at these venues is consistently better than at free restaurants and includes many of the Royal Caribbean staples, such as Chops Grille and Izumi.

Izumi Sushi & Hibachi (Deck 4); sushi: a la carte; Teppanyaki: prix fixe: Izumi offers the biggest hibachi dining area across the fleet (in terms of cooking stations, not square footage). While the Oasis-class ships have bigger spaces, a lot of that space is taken up by the sushi restaurant. Here it's all about hibachi with just a small raised area dedicated to sushi. As in all hibachi restaurants, it's part theater, part meal and is an acquired taste, metaphorically speaking -- if you don't like egg juggling, food throwing and cheesy singing, perhaps it's not for you. If you are happy to be entertained and fed at the same time, this new venue comes highly recommended.

The set price includes edamame, rice and a green salad (or -- for a fee - you can order off the sushi menu). Mains consist of beef, chicken, shrimp, veggie or a combo (which is an extra charge). This is then chopped, whirled and cooked by your friendly chef while you watch. It's delicious, especially washed down with an Asahi beer. There is mochi ice cream for dessert. It was, by far, our favorite venue on the ship.

Sugar Beach (Deck 5); a la carte: This candy store was added to the Independence of the Seas in 2018 and features a huge choice of loose candy, both retro and modern, to bag; as well as chocolate bars, lollipops and bacci (Italian for kisses = little chocolate treats). Beware: A little bit of candy can cost a lot of money (especially when you have demanding kids in tow).

Playmakers Sports Bar & Arcade (Deck 4); a la carte: Added during the 2018 refit, this sports bar and arcade occupies a large space on Deck 4 next to the Casino. Primarily a bar, it also offers classic sports bar food such as burgers ($9), sliders ($3 each), wings ($8 for a dozen), nachos ($7), loaded potato skins ($6) and popcorn shrimp ($7) to wash all those beers down. For dessert you can find a warm chocolate chip cookie served with Nutella, melted marshmallow and a side of milk shooters ($6).

Ben & Jerry's (Deck 5); a la carte: Ben & Jerry's ice cream bar, located across from Cafe Promenade and next to Sugar Beach (there's an adjoining entrance at the back), makes delicious fresh waffles, in addition to offering up a large ice cream selection that tops a dozen flavors. They also make floats and shakes and let you sample flavors before committing.

Fish & Ships (Deck 11; a la carte): This opened to much fanfare in the 2018 refit, to cater to British tastes, offering what the line calls a "quintessentially British seaside menu" of classics such as fish 'n' chips, battered sausage and chip (fries) buttys (sandwiches), plus a few extras such as calamari. While we liked the casual nature of the eatery, we found the prices (most items are $9 for not big portions) steep, which would have been fine if the food was any good, but it's not; we found it over-fried, dry and tasteless.

Giovanni's Table (Deck 11): Giovanni's is a family-friendly place located next door to the Independence of the Seas’ buffet. It has a relaxed atmosphere and good, hearty, if not outstanding cuisine. The waiters greet you with a warm welcome in Italian and guide you to your seat. Neat and simple tables and decor are ideal for a family with young children who may fidget during the meal. The food is beautifully presented but maintains a rustic charm in its blend of Italian herbs and seasonings. One of the starters, focaccia della casa -- a flatbread with potatoes, marinated artichokes, olives and pesto -- is a perfect example of well-cooked, homely food. We particularly liked the oven-baked, almond-crusted scallops with red bell pepper, which are a more delicate starter and a lighter option, as compared to some of the heartier, carb-filled mains. There are dishes for vegetarians and those with specific dietary requirements, as well. Normally only open for dinner, it does open for lunch on the last sea day.

Chops Grille (Deck 11): Chops Grille is the ship's steakhouse restaurant, and is a mainstay across the Royal Caribbean fleet. The menu is steakhouse-influenced with starters like shrimp cocktail and Caesar salad; various cuts of meat, including filet mignon, lamb and pork; and family-size side dishes, such as succotash and mashed potatoes.

Johnny Rockets (Deck 12); $6.95; Johnny Rocket's is the only dining venue onboard to offer outdoor seating. The 1950s diner-style national U.S. chain features trademark gut-busting hamburgers, chili dogs, onion rings, fries and milkshakes. (The Oreo sundae is worth trying!) It's also the only place onboard that you'll find plastic straws (Royal Caribbean tried to do without them, but it didn't work. Especially with kids). If you hear the Bee Gees starting to rev up on "Saturday Night Fever," you'll know that the wait staff are about ready to break into a dance. Linger over your meal, and you'll be treated to several versions. The cover charge does not include drinks, such as sodas, beer or milkshakes.

Room Service on Independence of the Seas: Delivery is available 24 hours a day, at a cost of $7.95 per order. The breakfast menu is rather more generous than some of Royal Caribbean's big-ship competitors, going beyond continental fare to offer "country breakfast" items like eggs and bacon. The all-day selection, though limited, offers a blend of healthy and fast-food choices, such as fruit plates, salads, sandwiches, burgers, pizza and chili, along with desserts.

Find an Independence of the Seas Cruise from $218