Independence of the Seas Cabins 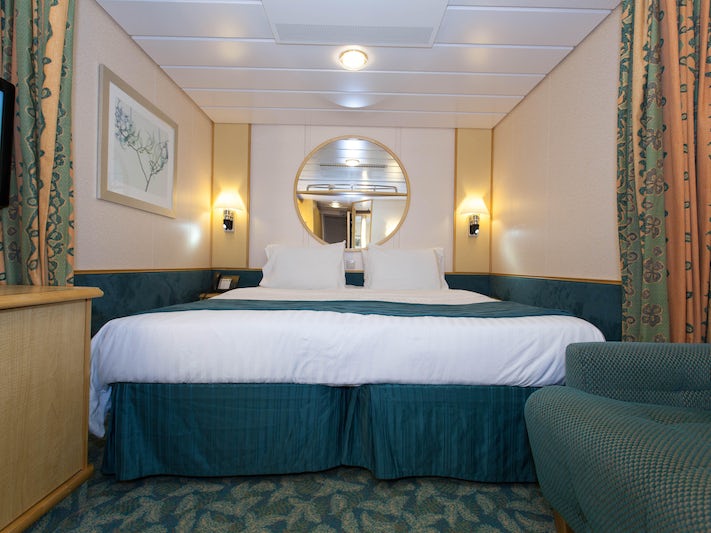 The majority of cabins on Independence of the Seas are outfitted in a pleasant nautical/natural blue-and-green color scheme. However, 107 cabins -- added in the 2018 refurb -- feature a more subdued color scheme of gray and beige.

All standard rooms, from insides to balconies, come with interactive flat-screen televisions, telephones, desks/vanities, a safe and easy chairs or couches. Socket types are European and U.S., but not U.K. three-pronged, and are placed above the desk. Some cabins also have USB ports by the desk.

Beds, covered with duvets, can be configured as twins (narrower than American-style single beds) or as a queen, with a small chest of drawers either side (or in the middle). There is a double closet with plenty of hanging space and drawers, where you will also find the safe. There are additional drawers under the desk/vanity.

Bathrooms are shower-only (though, fortunately, there are doors instead of the dreaded clingy curtain). The only toiletries provided are a bar of soap for hand-washing and dispensers in the shower for shampoo and shower gel, so bring your own products if that's important to you.

Mini-fridges, stocked with for-fee items, are tucked into one side of each vanity. Tea- and coffee-making facilities are tucked away in a closet.

One cool feature: Standard cabins have a curtain in the center dividing the room, thus allowing for privacy/late-night TV viewing while someone else sleeps.

While staterooms of the same type are virtually the same on all decks, some are more desirable than others. The best cabins on Independence of the Seas are located on decks 7, 8 and 9, as they have no public areas directly above or below and are therefore quietest.

On the other side of the spectrum, the cabins to avoid on the Independence of the Seas are those on decks 3, 6 and 10, because they are beneath or above some of the busiest and loudest bars, restaurants and entertainment venues onboard.

Interior Stateroom: Standard inside and promenade-view cabins on Independence of the Seas measure 152 square feet and 149 square feet, respectively. Sixty-one interiors were added in the 2018 refit and although the same shape and size, they feature different decor, fixtures and fittings. You will find these on Decks 6 and 12.

It's worth noting that what you gain in terms of a view with a Promenade cabin, you lose in terms of privacy -- especially on the lower decks of the Independence of the Seas. (Unless you keep your curtains closed, people can look straight into your cabin from below.) And if you're planning on early nights -- forget it -- there are almost nightly parades on the Promenade outside your cabin.

Note that there are also "spacious" interior cabins on Independence of the Seas. They come in at 337 square feet, and with a double sofa bed, two pull-down beds and two twin beds, they sleep six and work well as a family option.

Like other Freedom-class ships, Independence of the Seas also features the so-called B & J cabin. To many, these are also some of the cabins to avoid: This promenade-view stateroom overlooks the backsides of the two cows that stand atop the Ben & Jerry's ice cream parlor (just underneath). On the plus side, cruisers who end up in this obstructed-view cabin receive complimentary ice cream at Ben & Jerry's every day of their cruise.

Oceanview: Ranging from 161 to 200 square feet, most outside cabins feature large porthole-style windows. Variations on this include "Spacious," "Ultra Spacious" and "Panoramic." The ultra-spacious ocean-view rooms are also known as Family Oceanview Staterooms on Independence of the Seas and come in at 351 square feet. They accommodate six in twin beds and a sofa or pull-down beds, plus there is a sitting area, making them ideal for families.

The panoramic ocean-view variation was introduced in the 2018 refurb of the Independence of the Seas. There are 39 of them on Deck 12, arranged around the Spa & Fitness Center; they are generously sized at 283 square feet, just shy of a Junior Suite. They feature floor-to-ceiling glass windows, a separate living area and a rotating TV situated on a stand in the center of the room.

Balcony: Balcony rooms come in two varieties on Independence of the Seas. The Deluxe is 177 square feet, with a 74-square-foot balcony, while the Superior is slightly larger at 180 square feet, though, ironically, the balcony is slightly smaller at 68 square feet. Sliding-glass doors lead to the balcony. Balcony furnishings are made of mesh and metal; there's room for two chairs and a small table.

Minisuite: Also known as Junior Suites on Independence of the Seas, these cabins come in at 287 square feet and feature walk-in closets, large desk space with numerous drawers, sofa beds, lounger-type chairs, coffee tables and 101-square-foot balconies. Bathrooms include a tub, and at this level and above you get branded bathroom products, which include shower gel, shampoo, conditioner and lotion. Note three additional Junior Suites were added in the 2018 refit, which although the same size, feature brand-new fixtures and fittings.

Independence of the Seas Suites Come with A Host of Perks, Including Free Canapes and Concierge Services

Grand, Owner's and Royal Suite passengers have access to the Independence of the Seas Suite Lounge, just off the Viking Crown Lounge, high up on Deck 14, where they can enjoy complimentary pre- and post-dinner canapes and cocktails. They can also use the concierge that's on call to book shore excursions, dining reservations and spa appointments. There is also a private suites-only sun deck, with lovely views over the ship toward Sky Pad and Perfect Storm.

There are a number of different suite types on Independence of the Seas, including a selection of family suites:

Ocean View Panoramic Suite: There are two of these suites on Independence of the Seas, both built as part of the 2018 refurb. They can accommodate up to six people, but note although they offer gorgeous views and are huge (406 square feet), with two bedrooms, each with two twin beds and a private bathroom, they do not have a balcony.

Grand Suite: These measure 387 square feet and have two bedrooms as well as a separate living area. They have tubs in the bathroom, walk-in closets and 126-square-foot balconies. You'll find them on Decks 6, 8, 9 and 10 (but note the one on Deck 10 has just one bedroom, though it has the same square footage). Two Two-Bedroom Grand Suites were added to Independence of the Seas’ decks 8 and 9 in the 2018 refurb and are billed as "Family Suites." They feature modern fixtures and fittings, but apart from that are the same as the existing Grand Suites, with the same benefits and décor style.

Owner's Suite: There are eight 614-square-foot Owner's Suites onboard the Independence of the Seas. They feature a marble entranceway, which has a dining table that can seat four, surrounded by glass-fronted wardrobe doors. There is a small bar area with the tea and coffee facilities on top and the mini-fridge below, and a living area, which features a L-shaped sofa with a coffee table, a side table and two chairs.

The room is divided by a TV on a pedestal, which (very cool) swivels around so you can watch TV in bed or in the living room. The bedroom has a queen-sized bed and a vanity. The 160-square-foot balconies can be accessed from the bedroom and living room and have two loungers, two side tables and a dining table for four.

Royal Suite: There is just one Royal Suite and this is a vast 1,633 square feet with a 360-square-foot balcony on Deck 10 of the Independence of the Seas. Inside, you'll find a baby grand piano straight ahead; the bedroom lies to your right and the living room to your left. The living room features a bar, with barstools; a dining table with four chairs; two sofas (one of which seats three and converts into a sofa bed); and two lounger chairs as well as a TV affixed to the wall and an entertainment center below. There is some lovely artwork, including sculptures and paintings. Sliding-glass doors lead out to the balcony, which has a whirlpool tub, loungers and a dining table.

The bedroom has a king-sized bed and stunning floor-to-ceiling glass windows. There is a vanity and a separate chair and stool. The walk-through closet connects the bedroom to the bathroom, which has a whirlpool marble tub and separate shower.

Family Suites: Four Royal Family Suites (610 square feet, with 234-square-foot balcony) hold up to eight and feature a living area with a double sofa bed and two bedrooms with two twin beds that convert to queens. (One also features third and fourth bunks.) Each bedroom has a bathroom with shower; one also has a tub.

Presidential Family Suite: This suite also exists on Independence of the Seas' sister ships Freedom of the Seas and Liberty of the Seas, and is unique in the industry. The suite is 1,215 square feet, with an 810-square-foot balcony and sleeps up to 14. It is made up of two master bedrooms with private baths, as well as two smaller bedrooms, each with two pull-down beds and two twin beds that convert to a queen.

Moreover, there are two additional shower-only bathrooms (the same as you'd see in standard accommodations). The 810-square-foot private balcony is a destination in its own right and is outfitted with a hot tub, teak dining set (table and chairs) and padded loungers.

Find an Independence of the Seas Cruise from $177