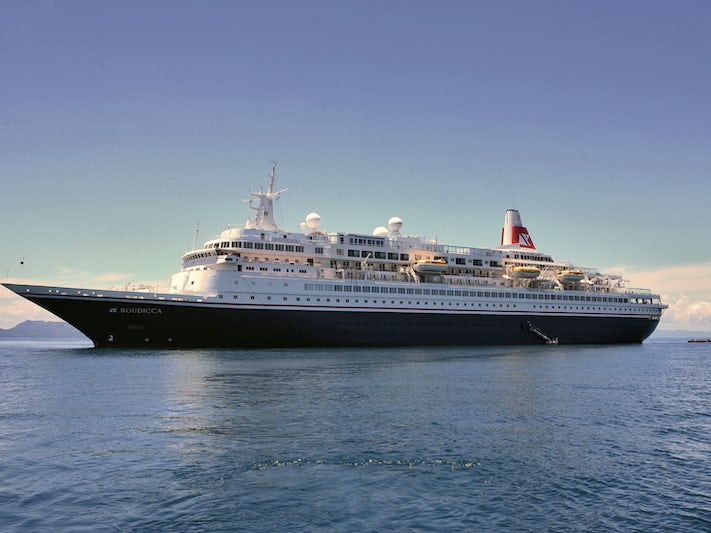 Boudicca was retired from the Fred. Olsen fleet in August 2020 and was replaced by the former Holland America Line ship, Amsterdam, renamed Bolette, in 2021.

Old-style cruising with traditions such as set dining times, dressing up and afternoon tea

Passengers under 60 and families will feel out of place

Boudicca is a ship with an illustrious lineage. It began life as Royal Viking Sky, one of the legendary "white ships" owned by Royal Viking Line, which was, in its day, the epitome of elegant and luxurious cruising. After a varied career operating for Norwegian Cruise Line, Princess Cruises and Star Cruises (among other lines), Boudicca was acquired by Fred. Olsen Cruise Lines in 2005. The line also operates its sister ship, the former Royal Viking Star, as the popular Black Watch.

Boudicca was "stretched" in the early 1980s with the addition of a 91-foot midsection, gaining a considerable amount of open-air sunbathing space on the top deck. The ship was redone for Fred. Olsen in 2006. It went into dry dock again in late 2013 and came out with a number of new features including a dedicated coffee shop called Cafe Venus, the Morning Light Pub and the ship's first for-fee dining area, The Grill, an outside space on Deck 6. It is slated for another refit in spring of 2018, when it will receive new carpets and furnishings, as well as a completely redone dining room.

Boudicca is decked out -- as an aging grande dame should be -- in good quality, discreetly stylish fabrics, although some of the colour schemes are a little dated. But no matter; the ship is well proportioned and devoid of cheap flashiness and surface glitz, which are the most important things to its target audience of Brits ages 60-plus.

The ship is enjoyable if your idea of fun is a gentle cruise in pleasant surroundings, peppered with light, humorous conversation; it's not so suitable if you're a party animal in search of 24-hour action.

Ultimately, Boudicca, like other Fred. Olsen ships, is known for its classically British feel. It attracts a different type of traveller from P&O Cruises -- the kind of steadfast Brit who "wouldn't be seen dead" on a big ship and has no interest in casinos or balcony cabins. (The ship does, in fact, offer both.) Although Boudicca is showing its age, these cruises are a treat for travellers who enjoy small, classic ships in a proper and cosy British setting.

Expect to meet mostly British couples of a certain age or beyond. The ship does attract single passengers (mainly women), and singles' mingles are held throughout the cruise in one of the lounges. However, on our cruise, they always seemed to happen mid-morning, when many people were on shore excursions. There are gentleman hosts to dance with the ladies, and they seemed extremely diligent (and dapper), although watching them nip off to the side of the dance floor between numbers to sanitise their hands was a little off-putting -- but good common sense, of course.

The line streamlined its dress codes in 2013. It continues with its traditional formal nights -- usually three or four during a two-week cruise -- but the dress code for the remainder of the evenings onboard has been simplified to 'smart casual', which means jacket and tie, or open-necked shirt, with Chinos or smart, dark-coloured jeans for male passengers. For female passengers, the choice could be an elegant dress or casual separates. Shorts, flip-flops and baseball caps are not welcome on smart casual nights.

Theme nights have been phased out and now there is only one: British night. Some passengers go to great lengths to dress up on these evenings; the public rooms are decorated, the bar staff and waiters appropriately attired, the food is traditional British and the entertainment is also themed, with sing-a-longs in the Neptune Lounge.

During the daytime, there is a wide variety of dress around the ship, depending on activities undertaken, but swimwear is not welcome in the restaurants and bars.

Boudicca is comfortable and the food is very good - plenty of choice and variety, and the staff are friendly and helpful.Read More
MargaretP

Fine cruise to the Fjords of Greenland

We boarded Boudicca at the beginning of August in Dover for her Fjords of Greenland cruise. We had booked a superior outside cabin but were upgraded to a junior suite some weeks before departure.Read More
andrewlgc

The Boudicca cruise was already booked and paid for so rather than lose money we went.Read More
The happy wanderers

Our best ever cruise

A big thanks for the crew of the Boudicca for helping to make this one the best ever. Thanks Fred Olsen.Read More
bumfig