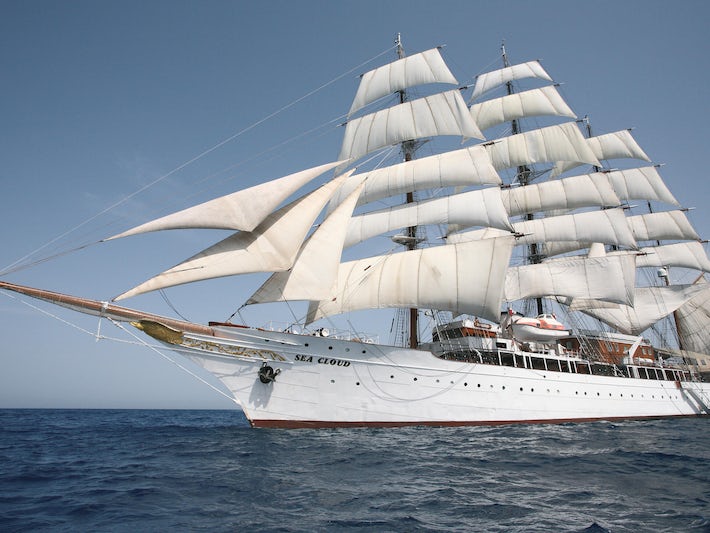 Only a select few vessels in the world have the mystique to turn everyone's eye and generate excitement and envy whenever they sail into port. An authentic remnant from another era, the square-rigged, 1931-built Sea Cloud is just such a vessel. Managing to combine the luxury and intimacy of a private yacht with the history and romance of a sailing ship, some consider a voyage on Sea Cloud to be not only one of the best cruises in the world, but one of the top travel experiences available anywhere.

Built for American cereal heiress Marjorie Merriweather Post, the Sea Cloud was at that time the largest private yacht ever constructed. Mrs. Post spent years designing the ship and spared no expense in its fitting out. Just to make sure everything was perfect, a Brooklyn warehouse was even rented where she constructed full-scale mock-ups of the interior.

Sailing as Mrs. Post's beloved yacht until 1955, Sea Cloud had a remarkable career entertaining royalty and being used on diplomatic missions for one of Mrs. Post's husbands. During World War II, despite the initial objections of President Roosevelt who felt that she was simply too beautiful to be sacrificed, the ship was loaned to the U.S. Coast Guard and saw service against German U-Boats. Stripped of her masts, painted gray and fitted with anti-submarine guns, she served as a weather observation platform in the Atlantic.

Eventually sold to the dictator of the Dominican Republic, the ship's career was more checkered until it was bought in 1978 by a German group of investors who cared about it as much as Mrs. Post did. After a significant refurbishment, Sea Cloud entered passenger service in 1979 with a capacity of 65 passengers and 61 crew, a ratio that no accountant with a major cruise line would permit.

Today, Sea Cloud still feels very much like a private home and boasts some of the most attractive public rooms and cabins at sea. Days are tranquil and relaxed, either spent on deck under sail or at anchor in some of the smallest and most exclusive ports in the Caribbean or Mediterranean. Food and service are generally exceptional, with meals often served on deck. The ship's loyal staff (repeat passengers are quickly recognized), the friendly camaraderie between like-minded passengers, and the magic of the billowing sails create an experience that is impossible to duplicate.

Sea Cloud's most remarkable feature is its four masts, 29 sails and the tangled web of lines stretching skyward 178 feet to support the rigging. Unlike the modern, electronically operated Windstar Cruises ships, or Star Clipper's racier reproductions, Sea Cloud is genuine, and all sail setting is done by hand. Eighteen crewmembers scamper up the rigging and perform dazzling acrobatic acts, suspended over the ocean -- and your head -- as they furl sails.

With sailing one of the main reasons people choose Sea Cloud, the engines are used as little as possible, and itineraries created to allow for sufficient time underway. On my March sailing in the Caribbean, we often cruised with the engines off and just the sails pulling us along as the ship heeled gently under the wind. Because of the extra manpower required to operate the sails, they come down at 6 p.m., and the vessel motors during the evening.

Sea Cloud is maintained to the highest standards, and few ships can match the beauty of her teak decks, constantly gleaming brightwork and numerous details. In fact, the level of detail in the construction is so great that every vantage of the ship seems beautiful, and every coil of line on deck becomes a piece of art. Seen from afar with sails furled, the rigging is fascinating in its complexity, but with sails set, it is an evocative call to the past.

Reviewer's Note: Rating Sea Cloud was difficult! Judging by Cruise Critic's general guidelines, Sea Cloud doesn't offer enough amenities to warrant five stars (there are no balconies or alternative eateries). But this is one case (actually it's not the first case -- SeaDream's ships have also won a five star rating without many of the usual bells and whistles of luxury ships) where the overall experience might be justified in putting five stars. Much of the ratings have to reflect the uniqueness of the ship in some bit.

Sea Cloud is almost an icon in Germany, and a large percentage of the passengers will be German. Average passenger are in their late 40's to 70's, with a concentration centered around the late 50's.

Throughout the year, however, Americans make up the largest percentage of passengers carried, with the greatest percentage of Americans traveling in the summer Mediterranean season. It is possible, however, to get trips where Americans are in the minority. On my March Caribbean sailing, only six of the 36 passengers were either British or American. The ship's crew is proficient in both English and German, and the ship easily operates with two languages when needed.

Most passengers are well educated and financially successful (and you have to be to afford the cruise), but not pretentious or stuffy. There is a nautical, yacht-club feeling that pervades, and many of the passengers either sail themselves or own their own boat (or yacht). For many passengers, sailing Sea Cloud is the fulfillment of a dream, and they walk around wide-eyed all week, marveling at their luck. One passenger I spoke to when asked why he booked, simply exclaimed, "Sea Cloud! Sea Cloud! This is the Sea Cloud! I must -- I had to!"

During the day, Sea Cloud is casual, with most of the life centered around being outside in shorts and a T-shirt enjoying the weather and the sailing. At night, when eating outside, dress would be described in cruise line speak as "elegantly casual." Khaki pants and a nice collared shirt or button down shirt for men are sufficient, with women wearing a sundress or equivalent. Two nights a week are generally formal, with suits and a few jackets and ties being the norm. On these nights dinner is served inside in the dining room off a fixed menu.

Get Sea Cloud price drops
250,000+ people have entered their email

Where does Sea Cloud sail from?

Where does Sea Cloud sail to?

How much does it cost to go on Sea Cloud?

Sea Cloud is a legend and has a special character. That`s why we choose it. On a trans shore activities are not possible, therefore it is not relevant to give a rating.Read More
Jerry_k

Doesn't get better than this!

We look forward to returning for another Sea Cloud experience. No wonder that there were several guests who had cruised on Sea Cloud before. I highly recommend without reservation!Read More
sbfrost

Lovely Sea Cloud but Not 5 Star

I love sailing and wanted to visit Hermitage and experience educational lecturers on board Food was good on 2-3 occasions better food on Oceania line although not a sailing ship Cabin was cozy but it greeted me with a dead flower-not a good first impression and tissue on head floor-not good impression either Service aboard was good but not up to 5 stars Sails were up only 2 and half days-disappointing for those of us who were there to enjoy sailing square rigger Good rating overall but at 5 star prices, I expected 5 stars!Oceania line does not allow passengers to touch utensils which is excellent infection control in a number of buffet settings.Read More
sunset sybil 16

The Sea Cloud II is the delightful granddaughter of the Sea Cloud.Read More
Museum Travel