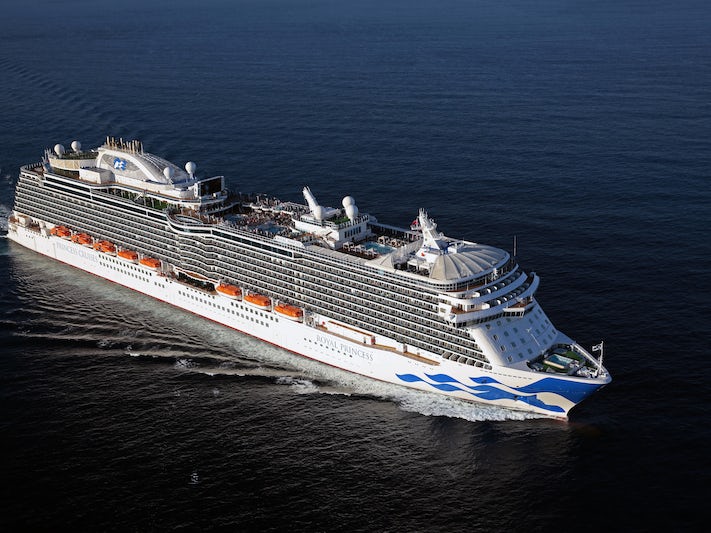 It combines a full afternoon tea with craft cocktail presentations. Bingo, trivia and game shows dominate the daily program and hosts special destination-themed events, like Puppies (or Parrots) in the Piazza, depending on the itinerary. Evening entertainment is mostly production shows and music events; you can also watch a recent release at Movies Under the Stars.

The modern and high-tech OceanMedallion, a personalization technology, is meant to make your cruise more convenient and service more intuitive. OceanMedallion, a small disk replacing the keycard, is used to open cabin doors automatically, embark and disembark, register food and drink preferences and many more, particularly when paired with several apps.

Unfortunately, on our Alaska sailing, OceanMedallion didn't live up to the hype. Spotty Wi-Fi hindered ordering drinks using the app in most locations or finding our cabinmate using OceanCompass. Similarly, bartenders or waiters rarely consulted iPads; most interactions used our room number, like always. The MedallionNet internet, billed as strong enough to stream, was inadequate to download email. The hotel director told us the system works better outside Alaska, but at least passengers on our sailing seemed to enjoy wearing the Medallions, even if they eschewed pulling out their phones.

Royal Princess shines in its partnerships and programming, even if these lack major signage and branding within the daily Princess Patter. Chocolatier Norman Love's Chocolate Journey desserts stand out from the menu. The North to Alaska enrichment lectures, such as a talk by Libby Riddles, the first female Iditarod winner, were excellent. The Princess Luxury Bed by sleep expert Dr. Michael Breus is one of the comfiest we've experienced at sea. Animal Planet- and Discovery Channel-branded shore excursions were passenger favorites.

A nice choice for people who love a traditional cruise's comforts and rituals, Royal Princess is big enough, with an impressive array of restaurants, to appeal to first-time cruisers. It's not trendy, but it's hard to be bored here -- that's enough for most Royal Princess passengers.

Modern ship with a traditional take on cruising

Princess passengers are typically people who seek casual elegance and shy away from overt trendiness. On Alaskan sailings, you'll find more first-time cruisers who have chosen the ship for the destination, while on warm-weather sailings, you'll find more repeat passengers. Americans dominate, on both routes; expect more people from around the entire country in Alaska and a more local audience when the ship sails from a U.S. homeport.

Many families choose Princess; multigenerational groups (grandparents, adult children, grandkids) enjoy the dining and entertainment options and the line's solid family programs, particularly during the summer and holidays. During the Alaska season, the average age is mid- to late 50s; on warm-weather itineraries, the average age skews higher into the 60s (except during school holidays).

Daytime: Casual, with shorts, T-shirts, jeans and leggings most common inside the ship. Bathing suits and cover-ups are the main outfits on the pool deck.

Not permitted: No swimwear, casual jeans (defined as ones that are frayed or with holes), tank tops, ball caps or shorts are allowed in the restaurants at dinnertime.

Get Royal Princess price drops
250,000+ people have entered their email

Find a Royal Princess Cruise from $179

Where does Royal Princess sail from?

Where does Royal Princess sail to?

How much does it cost to go on Royal Princess?

Cruises on Royal Princess start from $179 per person.

Is Royal Princess a good ship to cruise on?

If you are a smoker you will not feel like a second class citizen.

My mom, her four children and their spouses celebrated mom on the Royal Princess. We all enjoyed the amazing shows, attended Leo Rossi’s fun and informative lectures, and enjoyed two wine tastings.Read More
Pebeck

After 20 plus cruises with various companies, Princess is still a favorite. First time on Royal Princess. Ship was beautiful and spacious, no lineups for any venue or dining.Read More
From Edmonton