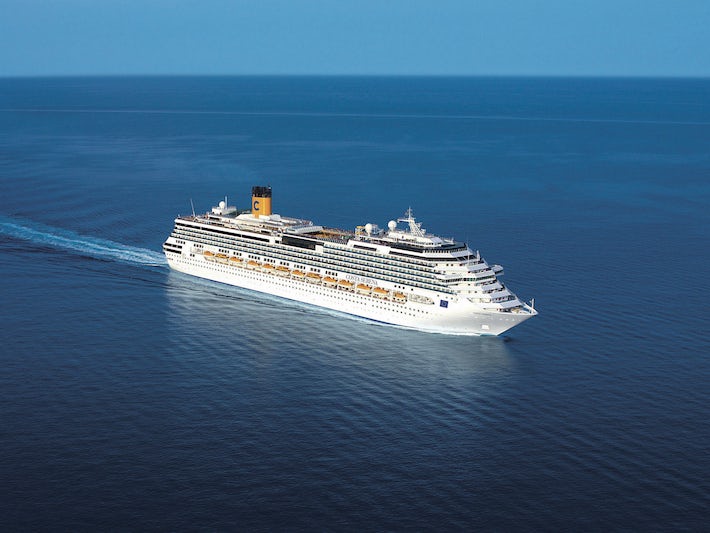 When Costa Cruises launched Costa Serena in 2007, I wondered how the Europeans at whom it was aimed would react to an American designer's concept of classical mythology, with polystyrene Greek gods floating above the atrium, Pan's hairy goat legs supporting the red, glittery stools in the nightclub and green tentacles adorning the cocktail bar's ceiling. But they seem to love it.

Owned by Carnival Corporation and built in Italy with both the European market and European cruising in mind, Costa Serena became the largest in the Costa fleet, with a maximum capacity of 3,780 (all berths). It's the line's 12th ship.

Although there are subtle differences, there are many Carnival hallmarks in the layout: the amazing nine-story atrium lobby, the top-deck waterslide, the busy thoroughfare of Deck 5, where almost all the bars are located, and the pair of two-deck dining rooms, Vesta and Ceres, at the centre and aft of the vessel.

I sailed when the ship was at almost 100 percent capacity, which was quite an experience. There were hordes of people everywhere -- all the time. At one point, I counted 23 people in a Jacuzzi that looked more suited to 12, some of them standing in the middle as there was nowhere to sit.

The ship does, however, absorb its 3,780 passengers well, provided you don't want to sit directly by the pool, where plenty of territory is staked out with towels.

Having said this, American passengers have to be prepared for the broad cultural mix on this ship. Southern Europeans, particularly Spaniards and Italians, are exuberant holidaymakers, dancing by the pool, dancing in all the bars and moving around in large family packs. Children are rarely put in the kids' club and swarm all over the pool areas, including the adult pool. Everybody goes to bed late, whatever their age. There's no regard for standing in line, whether waiting for an elevator or trying to assemble a salad at the buffet. In the main, it's one big, happy, multicultural family. But if you don't like crowds, kids or noise, choose another ship or travel in low season.

Apart from 350 Americans, a handful of Brits and 400 Spaniards, all the passengers were Italian on my cruise. The balance is different on Costa Serena's winter European cruises, with a much higher proportion of German and British passengers as well as those from Portugal, France and the U.S. Ages in summer range from babies and children to teens, 20-somethings, older couples and extended families -- the whole gamut, in other words, creating a much younger feel to the ship than on, say, a Royal Caribbean or NCL vessel cruising in Europe.

Announcements were made in Italian, English, Spanish, French and German, but fortunately were few and far between and not intrusive at all; so much so, that several passengers continued to lounge around the pool during the lifeboat drill.

The dress code is pretty much a case of "anything goes" in summer. There is a formal night, but only a handful of tuxedos appeared; smart casual is fine. A lot of people stick to swimwear for the lunchtime buffet.

Get Costa Serena price drops
250,000+ people have entered their email

Where does Costa Serena sail from?

Where does Costa Serena sail to?

How much does it cost to go on Costa Serena?

The best cruise ship ever

This cruise ship is luxurious and everything,all details are catered for, so you can just enjoy the best cruising experience of your life.Had the best highlighting for my hair too so a bonus and plenty of beauty treatments onboard at good prices and I took home lots of products.Read More
Venusandback

Lots of fun, but probably won't come back.

Well not on Costa. They sell multiple drink packages. There's a drink package where you can have a limit of 10 drinks per day. Or unlimited beer per day.Read More
doctorpj

Good but could do better

So Disappointing - but I guess you get what you pay for

We're written and complained to Costa who have basically said 'oh well, never mind' and when I said that this wasn't acceptable they have just ignorned my emails. Shocking service - really is.Read More
chriskav