Oasis of the Seas Review 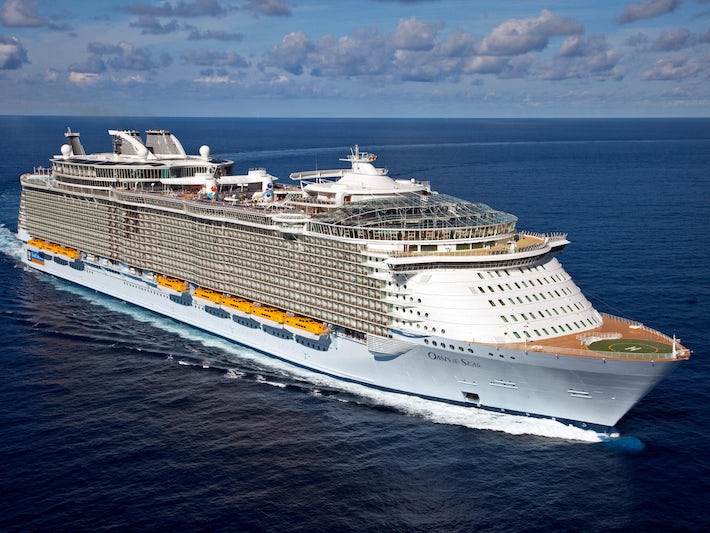 One of the largest ships in the world, Oasis of the Seas makes an impression even before you board; the mega-ship looms above its counterparts. The this-can't-be-a-ship effect continues as you board; lined with eateries, shops selling designer goods and logowear, and Starbucks -- and no outside windows -- the ship's Royal Promenade can feel like a mall, rather than a cruise ship.

And yet, Oasis of the Seas has been enthusiastically embraced as one of Royal Caribbean's most beloved vessels, even more than a decade after its launch. At double occupancy, Oasis sails with 5,606 passengers, but during the busiest seasons there can be nearly 6,700 people onboard. Its onboard attractions are so popular that up to one-third of the passengers never even leave the ship in port.

So what makes Oasis of the Seas a hit for the families and active cruisers who love it? The secret is not only in the ship's neighborhoods -- which divide the vessel into manageable pieces, keep bottlenecks to a minimum and provide a dizzying amount of activities -- but also in Royal Caribbean's ability to evolve Oasis over time, sinking $165 million into the ship in 2019 as part of its Royal Amplification initiative to revitalize older ships.

The Boardwalk boasts two rock climbing walls, a carousel, the AquaTheater, the Ultimate Abyss dry slide and the impressive Playmakers Sports Bar & Arcade. The aft deck Pool and Sports Zone has the Perfect storm trio of other water slides, a kids splash park, two FlowRider surf simulators, a basketball court, a mini-golf course, a table tennis area, a teen club and a short zipline. Add in the sheer amount of shows, restaurants and bars, and you'll see that it's impossible to be bored on this ship.

Cruising on a ship this size comes with compromises. If you want to see all the shows and entertainment on offer, you must book online in advance, as the theaters are simply not big enough to hold everyone. Specialty dining reservations should be made in advance, too. If you don't like planning your cruise activities before you board or hate lines, Oasis is probably not a great choice compared to Royal Caribbean's more intimate ships.

Packed with activities, restaurants and bars, Oasis is manageable despite its size.

Innovative and energetic, Oasis appeals most to active cruisers and families.

Daytime: Casual, with shorts and tees most common inside the ship and bathing suits and cover-ups on the pool deck.

Evening: On sailings of fewer than seven nights, dress remains casual, though shorts and tanks are not permissible in the main dining room at dinner. On optional formal nights -- now called "smart casual" -- men are asked to wear long pants and collared shirts, and women are expected to dress up a bit. Suits, sport jackets and cocktail dresses are the norm, but there is a tux rental shop onboard.

Not permitted: Bare feet are not allowed at any time in any venue, and tank tops are not permitted in the main dining room or specialty dining venues for dinner. Shorts are discouraged at dinner.

Be the first to know when Oasis of the Seas prices drop so you can book with confidence.

Find an Oasis of the Seas Cruise from $300

More about Royal Caribbean Oasis of the Seas

Where does Royal Caribbean Oasis of the Seas sail from?

Where does Royal Caribbean Oasis of the Seas sail to?

How much does it cost to go on Royal Caribbean Oasis of the Seas?

Cruises on Royal Caribbean Oasis of the Seas start from $300 per person.

Is Royal Caribbean Oasis of the Seas a good ship to cruise on?

We LOVED the layout of Oasis. We were previously on Independence and enjoyed Playmakers, but Oasis has Playmakers in the perfect spot...on Boardwalk..... we LOVED Boardwalk.... Read More
kmb2010

Oasis spoiled these first-time cruisers! Some downsides though. Details below...

We had to ask around and eventually got pointed towards the one Oasis staff, hidden among a throng of people, who had to deal with all of us and our cancelled trips.... Read More
Nola93

We were not traveling with children, but noticed that oasis of the seas is exceptionally child friendly has play areas for each group in the pool area. We loved the solarium adults only section.... Read More
Suzishoney

Didn’t win anything at all on the slots, wouldn’t go to The casino again if I went back on the oasis.... Read More
nazboyncaldwell