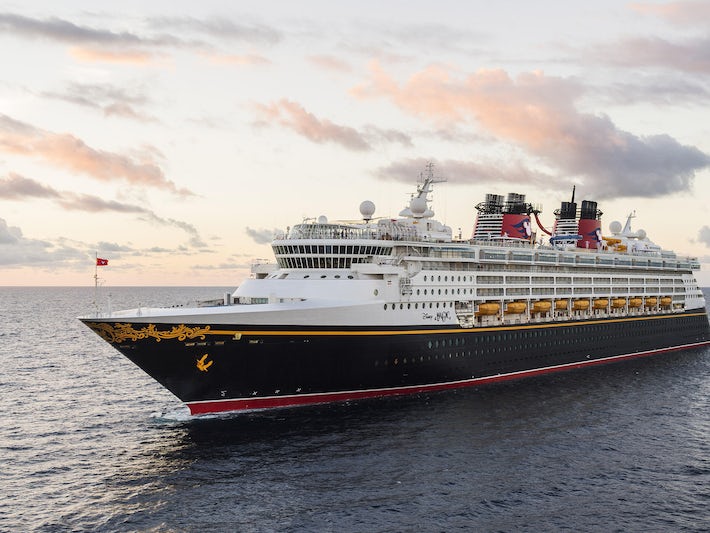 The ship that gave Disney Cruise Line a name in the industry has come a long way since its 1998 debut. Continual refurbs have kept the ship up-to-date -- newest features, added in 2018, include the Rapunzel's Royal Table dining experience -- and both kids and adults who are young at heart will find plenty of pixie dust scattered throughout their cruise. Plus, Disney Magic is also the only ship in the fleet that runs Marvel Day at Sea-themed sailings.

Even with its updates, Disney Magic retains a sense of tradition. Like its fleetmates, the ship sports a nostalgic ocean liner appearance with a navy-blue hull and red funnels (customized with Mickeys, of course). Its Art Deco design is also complemented by nautical decor, and the Disney staple of "hidden Mickeys" stealthily placed in everything from wallpaper to light fixtures keep the magic alive for those who find them.

There are a few Disney-themed venues that are appropriately colorful and exuberant, but much of the ship's appeal lies in the fact that it's designed for everyone, not just Disney fanatics and kids. This is especially evident in the adults-only pool area, which is strategically tucked away at the front of the ship, away from main pool action (it's actually larger than the family pool); the revamped pool bar Signals, fashioned as an outdoor lounge; and the After Hours suite of bars that turn those under 18 away at night. What makes the spaces work is that the rules are enforced; we've never seen so many children (and parents with babies) chased out of a public space before.

The Disney parks are known for their service, and this attention to the passenger experience carries onto Disney Magic. Staff beam at you as you walk through the halls, and game medals are given with gusto. Servers in the restaurant steer you away from problematic dishes and the entertainment staff get people moving in the disco. And, unless your heart is made of stone, you'll melt at the characters, all pros at child-wrangling, who embrace the outgoing and coax the timid into pictures of a lifetime.

If you're trying to decide between Magic (or its twin sister Wonder) and the cruise line's newest ships, know this: Magic has a more intimate feel than its larger sisters, which makes it easier to get to know your fellow passengers, keep track of family members and have the sense that you've experienced everything the ship has to offer, even on shorter sailings. (The "fish extender" groups, essentially Secret Santa-style gift exchanges, organized by passengers on many cruises makes it easy to meet people both before and during your sailing.)

Get Disney Magic price drops
250,000+ people have entered their email

Beyond its intimate feel, a cruise on Disney Magic is all about attention to detail. From tubs in all the cabins that make it easy to bathe little ones, to infused water and chilled towels awaiting your arrival after a long day in port, Disney takes care of the things you "didn't think about" to ensure your vacation is effortless. While prices are often at a premium and upsells abound, you'll likely find it's money well spent if Disney is part of your family's DNA.

Families make up the majority of cruisers on Disney Magic, although a handful of adult couples (sans kids) are drawn to the ship for the "Disney experience." The cabins, which are roomier than the industry average and can fit four adults, if two are willing to take bunk beds, also contribute to its appeal. Kids must be 6 months to cruise on a regular sailing and 1 year old to go on Panama Canal and transatlantic crossings.

Itineraries departing from U.S. cities attract predominantly Americans. When the ship sails in Europe, you'll notice more diversity, with less than half of the passengers hailing from the U.S. and the other percentage a mix of Spanish, Middle Eastern, British, Chinese and Japanese. While Disney has an impressive track record of returning passengers, it also welcomes a large number (sometimes up to 50 percent of the total passengers) of first-time cruisers.

Dress code is casual during the day and resort casual -- slacks and collared shirts for men and casual dresses or pants with a blouse for women -- in the evenings. Mouse ears and costumes are encouraged, and you'll see little princesses and pirates roaming the ship, as well as Marvel costumes during Marvel Day at Sea; adults often dress up for the latter, as well as Pirate Night.

On short cruises, there will be one "optional dress up" night, which is generally semiformal. Men are suggested to wear a tie and women, a dress or a pantsuit.

On a seven-night cruise, there will be one "formal" night in addition to a semiformal night. The clothing requirements are actually the same for both formal and semiformal nights; the biggest difference is on formal night when the characters also dress up for photos.

Not a fan of dressing up? Don't fret. Even these fancier nights lean more toward the casual side, with many women dressed in summer or maxi-dresses as opposed to long, formal ones. Swimwear and tank tops are not allowed in the restaurants at dinner, but shorts and jeans are permitted. In Palo, the dress code is a bit stricter: Shorts, capri pants, flip-flops and sneakers are not allowed, but you can wear jeans. It's the one place on the ship where you are likely to see jackets at dinner.

Find a Disney Magic Cruise from $569

Where does Disney Magic sail from?

Where does Disney Magic sail to?

How much does it cost to go on Disney Magic?

Cruises on Disney Magic start from $569 per person.

Is Disney Magic a good ship to cruise on?

Disney Magic won 18 awards over the years, including Best for Families in 2019.
Disney Magic Cruiser Reviews

Fun for the grandkids

Is it REALLY worth all the extra money

Pools were crowded, but OK if you want to see all the characters