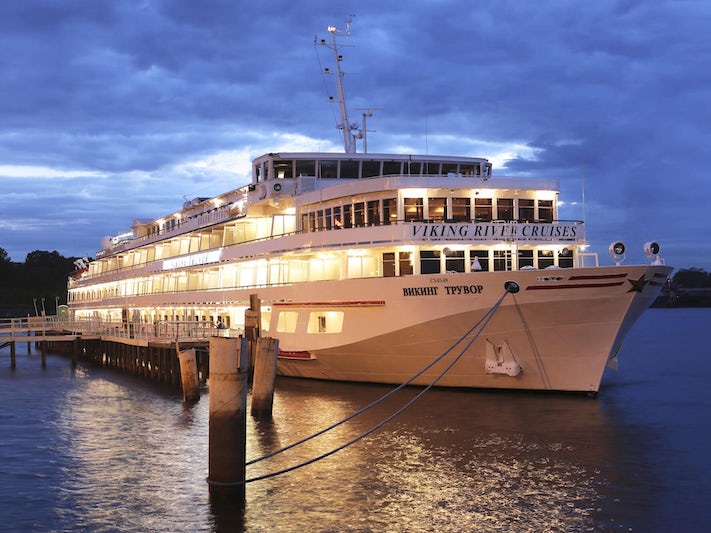 Despite political pressures that have created one of the chilliest travel climates in Russia since the Cold War, Viking Truvor's regular "Waterways of the Tsars" river cruises between St. Petersburg and Moscow give Western passengers an in-depth, exceedingly comfortable introduction to the world's largest country.

Built in the former East Germany in 1987 for Soviet vacationers (think bare-bones cabins and bathrooms so small the sink doubled as a shower), the 204-passenger Truvor was renovated from stem to stern in 2013. Like its sister Viking ships sailing in Russia, Truvor merges a muted Scandinavian sensibility with a nod to its Russian surroundings. Light woods combine with blue and beige upholstery, and walls are hung with reproductions of vintage Russian maps and posters.

As a pioneer in Russian cruising -- the company owns its ships, rather than leasing them, and has operated there since 1997 -- Viking holds an edge in staff and programming. In addition to local guides, Truvor sails with three Russian tour escorts who provide expert -- and, at times, surprisingly candid -- commentary on the country's rich history and fascinating, complicated present.

Truvor's itinerary includes three days each in St. Petersburg and Moscow, with complimentary guided excursions. The ship docks about an hour's drive outside the city centers, but Viking offers free bus transportation for passengers who want to explore on their own, as well as detailed instructions on how to access the cities' excellent subway systems.

In between the major cities, Truvor winds through a web of rivers, canals and lakes (including Ladoga and Onega, Europe's largest), with scenery that ranges from wild to suburban. Highlights include a stop at remote Kizhi Island, a UNESCO World Heritage Site famous for its wooden, onion-domed churches built without nails, and the "Golden Ring" city of Uglich, where passengers stop for homemade moonshine and conversation at the home of a local resident.

Most Truvor passengers have taken at least one other river trip, and on a recent cruise, more than half of the cruisers were repeat Viking customers. While the average age has been skewing younger in recent years, the demographic for Russia cruises is decidedly 55 and older. American couples dominate, though this itinerary also draws Canadians, Brits and Australians.

Like most river ships, Truvor emphasizes comfort over high style. As one pearl-draped London passenger noted somewhat disappointedly during an August sailing, pullovers and khakis were as common at the captain's welcome and farewell dinners as at every other meal, despite Viking's suggestion that those special evenings called for "dressy, but not formal" attire. (Those who plan to attend a performance at Moscow's famed Bolshoi Theatre might want to pack a sports jacket and dress, however.)

Layered clothing, comfortable walking shoes and rain gear are essential in Russia. Truvor sails between early May and mid-October, and even midsummer weather can be blustery and cold.

Once in a Lifetime Trip!

I had always wanted to take a Viking Cruise and see Moscow and St. Petersburg. It met every expectation! Viking has a great itinerary - I signed up for just about everything!! Moscow and St.Read More
mrssinger

On July 3rd we embarked on the Viking Truvor from Moscow to St Petersburg. We spent three days in Moscow touring Red Square, the Kremlin, three ornate Russian Orthodox Cathedrals, and other sites.Read More
careddig

Viking River Cruise of Russia from Moscow to St Petersburg