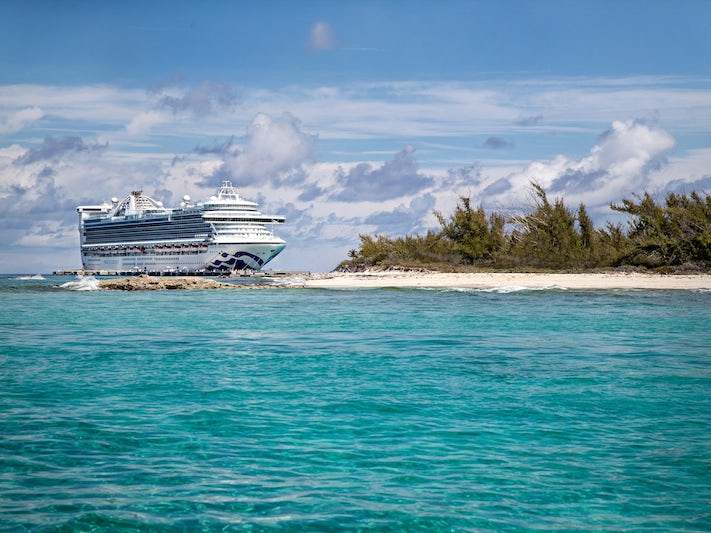 Caribbean Princess maintains a laid-back ambiance, allowing for laugh-out-loud fun that's never too boisterous. From baby boomers on the dance floor doing the hand jive to middle-aged cruisers competing with gusto in a paper plane competition and families guessing which silly law is real or not, people are on the ship to have some old-fashioned fun.

Not a lot of active pursuits available onboard

You won't find water slides or heart-pounding activities, and while Princess passengers aren't teetotalers by any means (a glass of wine being most people's poison), you won't see anyone staggering around after midnight either. What you will find are gregarious sorts who like to travel to new places, sing along with the piano guy in Crooners and have a good laugh at a guest comic's show.

It's not just all silly fun -- some of the ship's best attractions are more cultured. Trivia is standing-room-only and full of die-hard players, art lectures and auctions are well attended and the best stage show is full of operatic arias. Passengers on Caribbean Princess also eat up destination talks and enjoy participating in arts and crafts, and musical instrument lessons inspired by the locales the ship visits.

Lest you think Caribbean Princess is all about indoor pursuits, the ship has an impressive four pools and lots of sun deck space, so there's plenty of opportunity for soaking up some rays and catnapping the day away. It also features the Reef Family Splash Zone, with a kiddie pool, hot tub, whale-themed water playground, oversized games and a mocktail bar.

Caribbean Princess is also one of the most high-tech ships in the Princess fleet, boasting the OceanMedallion system, which replaces the traditional keycard with a casino chip-sized "medallion" that enables cruisers to order food and drinks on demand from almost anywhere on the ship (using a related app on their cellphone), locate any member of their cruise party and unlock their cabin door before they step in front of it.

Get Caribbean Princess price drops
250,000+ people have entered their email

The tech is pretty cool (who doesn't love having a piece of pizza and a beer delivered to them poolside!) but may be wasted on some of the older passengers who aren't so tech-savvy. The remaining cruisers, a mix of ages, though mostly in the boomer set, invariably give the tech a whirl, especially those with kids in tow during the holidays and school breaks.

While it may seem at times like Caribbean Princess is trying too hard to offer something for everyone -- multiple dining venues for foodies, a splash park for families, high-tech for the young (or young at heart) -- it all manages to blend seamlessly, creating an overall feel that's refined but comfortable and easygoing as well.

Caribbean Princess draws mostly North American passengers, regardless of whether it's sailing in the Caribbean or the British Isles. (The Manchester-born hotel director told us this is because the Brits would rather head to the warm weather of the Med than stay in their own colder climate.) With that said, our British Isles sailing did have a small contingent of Brits, Australians and Brazilians. The mix is fairly similar on Caribbean cruises.

Age-wise, the ship trends toward boomers and older during the school season; our mid-May sailing had less than a dozen kids on it, but crew members all expected loads of children once school let out. Along with kids come younger couples during the summer months and holidays. The rest of the year, the average age seems to be close to 65, with a smattering of younger couples.

Daytime: The dress code onboard Caribbean Princess is casual during the day.

Evening: Most evenings are smart casual, though depending on the length of your cruise, there will be one or two formal nights as well. Most evenings you'll see men in trousers or dark jeans and collared shirts and women in dark jeans, nice slacks or skirts with blouses or simple dresses. On formal night, most cruisers go all-out; you'll see plenty of men in suits and even tuxedos and women in ball gowns and cocktail dresses. (You'll also see a fair number who don't dress up at all, but they go to the buffet for dinner.)

Not permitted: In the dining rooms, items such as shorts, pool wear, distressed jeans and baseball caps are not permitted; shoes must be worn at all times.

Find a Caribbean Princess Cruise from $210

Where does Caribbean Princess sail from?

Where does Caribbean Princess sail to?

How much does it cost to go on Caribbean Princess?

Cruises on Caribbean Princess start from $210 per person.

Is Caribbean Princess a good ship to cruise on?

Caribbean Princess has been refurbished, and it shows. New carpeting and upholstery graces the ship. There are multiple pools.Read More
1Cradlemom1

Our Caribbean cruise was really a test cruise to see how safe, easy and fun cruising still can be. As far as safety, the Caribbean Princess had health protocols in place.Read More
Lisanord1

Princess staff was friendly and efficient in the usual great Princess manner. Dinners in the main dinning room were excellent as were lunches which we had occasionally.Read More
Unsalted

First Passengers After a 608 Day Pause

We took the Princess excursions and again felt safe in our Princess "bubble." The production show "Bravo" was amazing and exceeded my expectations.Read More
moonstream64