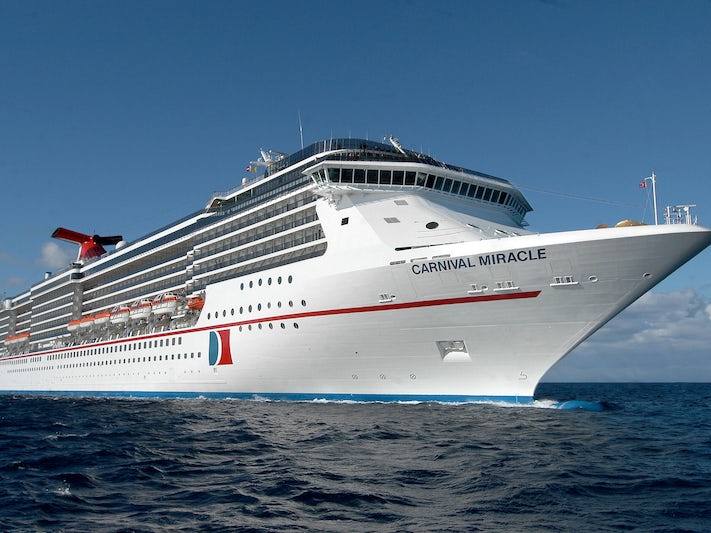 One of Carnival Cruise Line's most comfortable ships, mid-sized Carnival Miracle is a good bet for cruisers of all ages who are focused less on exotic ports of call than on an upbeat environment with lots of activities on the schedule, from dawn till late at night.

The Carnival Miracle ship marries a friendly, well-versed crew with a solid deck layout that minimizes crowding, while never letting go of Carnival's mantra, "fun." Built in 2003, Carnival Miracle is part of the Spirit class along with sister ships Carnival Legend, Carnival Pride and Carnival Spirit. With a capacity of 2,124 cruisers at double occupancy, the passenger-to-space ratio on Carnival Miracle and its sister ships is the best in the entire fleet.

The Carnival Miracle deck plans are thoughtfully designed: The ship has two promenade decks, the public areas are more conducive for traffic flow, the Lido Deck is well organized and one of the pools has a retractable roof, which means the area can be used in rainy or cold weather. Plus, Carnival Miracle has a see-through, red-domed funnel topping the Atrium. While not really noticeable from a distance, the Atrium sets the insides aglow with a raspberry tone, especially at the ship's satisfying Deck 10 steakhouse, Nick & Nora's, named for Dashiell Hammett's Thin Man characters. Actually, the Spirit-class vessels are where Carnival's steakhouse concept premiered, and in these ships the venue has a prime location at the top of the Atrium.

The theme of the ship is vaguely tied to the world of miracles. Characters out of fantasy and legend are dusted off to name and outfit the public areas, so there's The Raven Library, Mad Hatter's Ball Lounge, Bacchus Dining Room and Dr. Frankenstein's Lab Dance Club -- Robin Hood, Hercule Poirot and Robinson Crusoe also earn a tip of the Farcus hat.

Carnival's "Funship 2.0" refurbishment program was launched in 2011, but this ship only received a half-hearted makeover back then. However, the cruise line decided to make the most of its forced dry-dock period during the COVID-19 pandemic and completed the update of the ship. Carnival Miracle 2020 upgrades include new dining options such as Guy’s Burger Joint, RedFrog Rum Bar and BlueIguana Cantina, as well as the addition of WaterWorks water slides.

Carnival Miracle activities range from the standard pool-casino-spa offerings to most of the bells and whistles of the newer ships on the fleet, including water slides, great shows, ample sports areas, and themed kids’ cubs.

Carnival Miracle sailings include Alaska, Hawaii and Mexico. For the latter, Carnival Radiance is one of Miracle’s biggest competitors. The experiences offered by each differ widely, though, as the Radiance was built in 2020. Radiance is almost 15% bigger than Miracle, which allows it to offer more (and sometimes superior) features, including a better spa, six additions dining venues, a ropes course, dive-in movies, and more themed parties. However, Carnival Miracle has a smaller passenger-to-crew ratio and often feels less crowded.

For the most up-to-date testing, masking, and vaccination requirements aboard Carnival Miracle, please refer to Carnival Cruise Line. You can also use Cruise Critic's guide to health requirements on the world’s major cruise lines as we know them.

Appealing ship for Carnival regulars, but short on dining options for longer cruises

Costs Included With Your Cruise Fare

• Meals at the main dining room, the buffet and select other eateries
• Some room service menu options
• All theater and comedy shows
• Use of the water park and other outdoor activities
• Most daily activities unless noted below
• Use of the gym, but not most classes

Costs Not Included With Your Cruise Fare

• Gratuities (amounts vary by cabin type)
• Automatic beverage (18 percent) and spa tips (15 percent)
• Most room service deliveries, plus tip
• All drinks beyond water, tea (including ice tea), coffee and select juices in the buffet
• Spa treatments
• Shore excursions
• Internet access; Carnival Miracle Wi-Fi packages can be purchased before boarding
• Activities including, but not limited to the arcade games and bingo
• Photos

Expect lots of couples and groups of friends traveling together, and a wider range of ages than some cruise lines see. Passengers generally range in age from 25 to 65, with families onboard, especially during summer and school breaks.

The dress code on Carnival Miracle – and, indeed, on the entire Carnival fleet – is rather laid back both during the day and in the evening. The only exception is formal nights, when some men can be seen wearing tuxedos, and women, evening gowns.

Daytime: Casual, with shorts and T-shirts most common inside the ship and bathing suits and cover-ups de rigueur on the pool deck.

Evening: Carnival is one of the more casual cruise lines in terms of attire, but it's not quite "anything goes" after dark. For the main dining room (Bacchus), men are asked to wear slacks, khakis or dress shorts and collared shirts (Polos acceptable). Summer dresses, casual skirts, pants, capris, dress shorts, and blouses are requested for women. Carnival Miracle formal nights happen twice on a typical seven-night itinerary. On those evenings, a sports coat is encouraged for men, and cocktail dresses, pantsuits or an elegant skirt and blouse is recommended for ladies. Some men will wear a suit and tie or tuxedo on these nights, and women an evening gown.

Not permitted: Jeans are considered OK, but cutoffs, sleeveless shirts, gym/basketball shorts, flip-flops or bathing attire are not allowed at Bacchus. The same dress code applies to Nick & Nora's Steakhouse, except shorts are never allowed.

Get Carnival Miracle price drops
250,000+ people have entered their email

Find a Carnival Miracle Cruise from $189

Where does Carnival Miracle sail from?

Where does Carnival Miracle sail to?

How much does it cost to go on Carnival Miracle?

Cruises on Carnival Miracle start from $189 per person.

Is Carnival Miracle a good ship to cruise on?

I saw the Carnival Miracle departing San Francisco on it's first scheduled service from the City as a new home port.Read More
sfgenato

Amazing Cruise for fun on a budget

While Carnival is well known for "value" vacations These 5 day Mexico trips are just the best. And the Miracle is by far my favorite of Carnival's Spirit class ships.Read More
bahamut_mega

Now that the Carnival Miracle is homeported in San Francisco, we couldn’t resist taking her for a spin.Read More
Z0nker

Thanks Carnival and Miracle you exceeded our expectations and we will not hesitate to join you for another cruise if the Itinerary works for us.Read More
twine