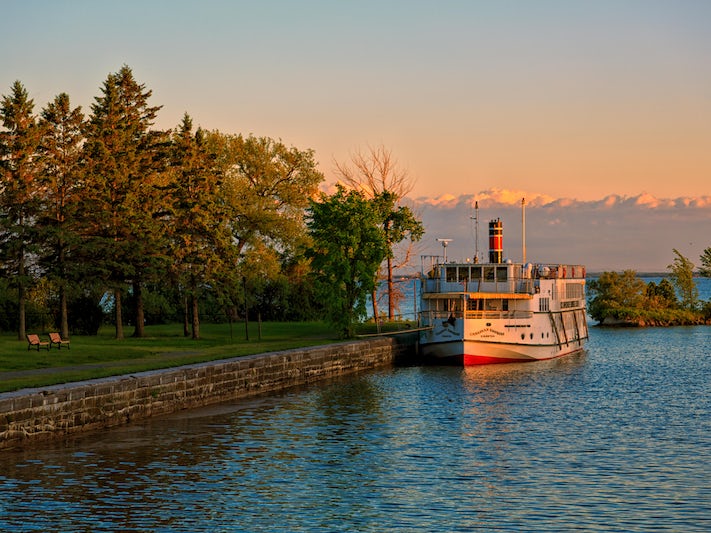 Canadian Empress is a riverboat that, while built in 1981, attempts to replicate a Victorian era atmosphere. And it works, not just in decor but in onboard ambiance, ultimately offering a cruise experience that for most of us -- particularly big ship ocean-cruising aficionados -- could seem somewhat precious and quaint.

But wait. You may be in for a very pleasant surprise. True, Canadian Empress, which hails from the one-ship (and family-owned and -operated) St. Lawrence Cruise Lines, isn't fancy. Cabins have no balconies, marble bathrooms with fancy amenities (bring your own shampoo) or in-cabin televisions. In fact, you have to book pretty early just to get a cabin with a double bed (aside from a handful that are so equipped, otherwise, all cabins have single beds). Meals are a communal -- though casual -- affair; dining is at set hours and you order off a set menu (with at most two entree choices) though you can choose your tablemates. And entertainment is provided -- not by casino or elaborate lounge acts -- but, as befits the ship's laidback atmosphere -- by a series of performers, ranging from a musicians to a comedian/songster that hold forth for two hours each night in the grand salon (dining room-reading room-show lounge-bar).

On Canadian Empress, the real focus was on our destinations -- on our trip the ship sailed the venerable St. Lawrence Seaway, which straddles Ontario and Quebec, Canada, and New York State. There was much emphasis on educational touring. Beyond that, crew worked very hard -- and it must be said succeeded mightily! -- in creating a wonderful onboard camaraderie for people who genuinely want to mix-n-mingle. So while a trip on Canadian Empress might not be a great choice for solitude seekers or honeymooners (or young kids), it's a marvelous experience for those who really want to learn something from the cruise they take -- and make some lifelong friends in the bargain.

Passengers by and large hailed from Canada or the U.S. (with a few Germans and Britons in the mix). Most were well traveled and, age-wise, well past retirement. Interestingly, many of them were devoted river cruisers who'd never even considered travel on a contemporary ocean-going cruise ship.

There's really no dress code - casual wear is the watchword. There are no formal nights though people did dress a bit more spiffy (business casual) on the cruise's last evening.

The St Lawrence River from Quebec to Kingston

The Canadian Empress is a replica of the old steam operated passenger riverboats that used to cruise in the Thousand Islands of the St Lawrence River.Read More
Ganmaggy

Perfect for Very First Cruise Ever!

My favorite picture is of the double rainbow off the stern of our ship.We were able to leave our car at the Ambassador Hotel while we were gone and could drop off our luggage early before embarking.Read More
Fiddlegal00

We embarked on the Canadian Empress from my hometown of Kingston Ontario intrigued by a voyage on the St. Lawrence River through the locking system to our final destination of Quebec City.Read More
kaydeeoh

The cabins are tiny with no storage other than three very small drawers [one under one of the bunk beds] and the other two in a small night table, as well as the floor space under the beds.Inside there is one room that serves as the common space for meals, entertainment, and gathering.Read More
NurseLinda