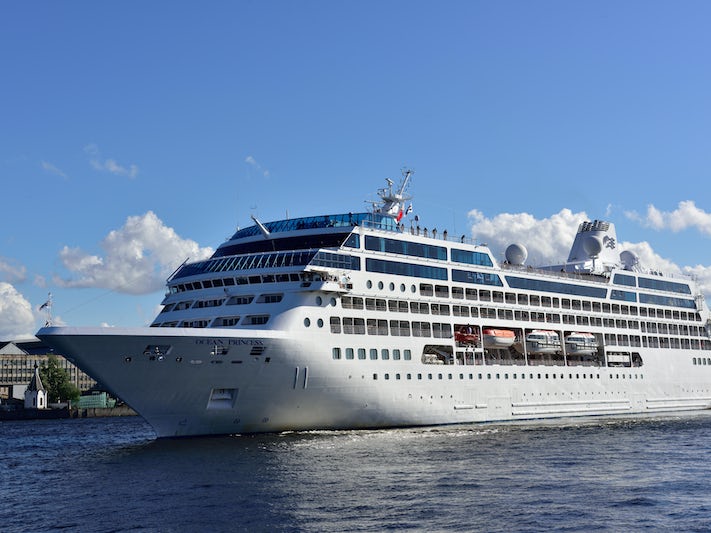 Editor's Note: As of March 2016, Ocean Princess will no longer be part of the fleet. Norwegian Cruise Holdings, Ltd. purchased the ship as an addition to its Oceania Cruises fleet. Under its new name, Sirena, the 684-passenger ship will join Oceania's R-Class (Insignia, Regatta and Nautica).

For someone who's traveled on Princess' bigger ships -- like Sapphire Princess and the still-sparkling Crown -- I boarded Ocean Princess, one of the line's two small vessels, not knowing what to expect. Immediately, it was clear I'd left the cookie-cutter world of mega-ships for something unique. Burgundy carpets and dark woods dominate the decor throughout the ship, creating a completely different feel than the peachy tones on newer mega-ships like Crown and Sapphire Princess. Sitting areas on either side of the reception desk feature sedate blue couches around a coffee table on Oriental-style carpeting. In a strange way it felt like coming home (or staying at a friend's very large English country house).

Ocean Princess, which, despite offers some of Princess' more exotic itineraries in Asia, Northern Europe, the Mediterranean and Africa, has its own story to tell. Princess acquired the 30,277-ton, 680-passenger ship and sister-ship Pacific Princess in 2002 from now-defunct Renaissance Cruises where it was one of eight near-identical mid-size ships. Its one of two "R-class" ships in Princess' fleet. (Pacific Princess is largely identical.)

On Ocean Princess, the exterior received the bulk of the changes: The ship was outfitted with Princess' trademark blue-tinted windows and a fresh coat of white paint. However, the interior went untouched. The lobby resembles that of a boutique hotel, with a grand staircase reminiscent of the Titanic as a dramatic focal point with wrought iron railings. Even some of the signage remains from the ship's Renaissance days. The oval plaque outside Sterling Steakhouse, for example, reads simply the Grill; if you are looking for Sabatini's, Princess' Italian eatery, well that's labeled Italian Restaurant.

Once inside, however, the experience is distinctively Princess. Menus are in line with the same eateries elsewhere in the fleet. Indulging at Sabatini's brought back memories of my first experience at that restaurant, on Sapphire Princess in Alaska -- just the same, you choose your main entree only, and a parade of hot and cold appetizers, salads, and pastas are served automatically. It's truly an event, and a Princess trademark I was glad to revisit.

The ship is elegant and gorgeous ... and intimate. There's only one pool (really all it needs) and a cabaret lounge takes the place of a main theater. Only one public space -- the Tahitian Lounge -- really feels Polynesian, with murals of tropical flowers and dark-skinned women gracing the walls. What's sometimes odd about a cruise on Ocean Princess is that menus and entertainment do not spotlight the itineraries it cruises. Aside from sailaway, the onboard atmosphere is generally very different from life on the other side of the gangway (or tender).

Having sailed on modern Princess ships including Sapphire and Crown, I found that the size of this gorgeous ship made it possible to get to know the staff onboard; almost all would stop what they were doing to say hello, whether I was passing by with my laptop and coffee first thing in the morning, or coming back onboard from a day ashore. It's that personal interaction more than anything else onboard that sets Ocean Princess apart from its larger fleet mates.

The majority of Ocean Princess' passengers are in their 40's, 50's and 60's, with the average overall age falling somewhere between 50 and 55. On our sailing, there were also a few kids and a handful of honeymooning couples; most guests hailed from North America (the U.S. and Canada), though there was also a decent showing from Europe and Australia/New Zealand.

During the day, most passengers conform to a casual, country club-style of dress. I was surprised by how many passengers donned sparkly gowns and tuxes for our trip's two formal nights, but plenty of others went a little more casual, wearing shorter dresses or light suit jackets. I made a nice sundress (floral, but black, so somewhat "formal") and high heeled shoes work, leaving pantyhose behind altogether.

The hiccups were minor and did not detract from the Ocean Princess or our enjoyment of celebrating Christmas and New Year’s on board in the Caribbean.Read More
Harbor1492

Too bad the Ocean Princess is leaving the fleet and heading to Oceana. She is special, as is her other small Princess ship, the Pacific Princess.Read More
Tonto Yoder

Time to retire the Ocean Princess.

It was announced that the Ocean has been sold to Oceania for a complete overhaul. It is really in need of an update. As one reviewer noted, "It seemed tired."Read More
smb12321

Sorry this small ship has been sold.

It is sad to see her leave the Princess fleet. I have become one of the many passengers who would gladly sail on her again for another exciting itinerary like this.Read More
fjstachour