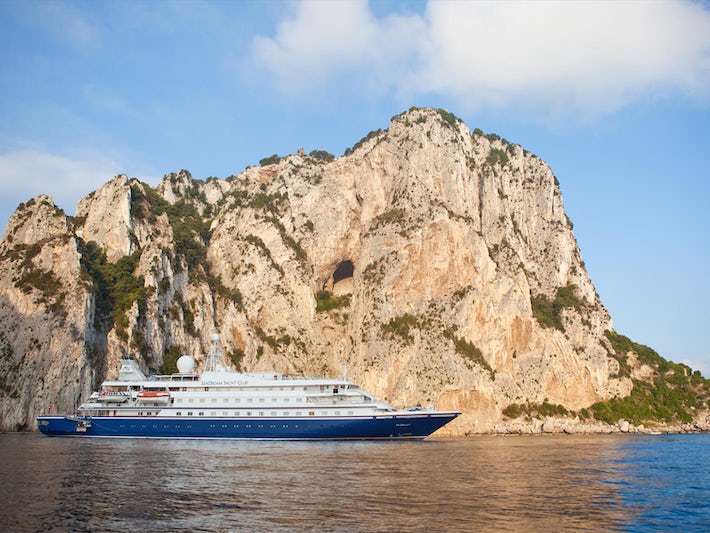 SeaDream Yacht Club's guests love the way the cruise line leans into yachting as a lifestyle. On 112-passenger SeaDream II, it translates into a vacation centered around your specific needs. This desire to tailor your cruise vacation to your ideal trip is what makes a SeaDream II cruise stand out. The ship is old and the cabins, while gorgeous, don't have balconies, but guests don't seem to care about the hardware when the software is so good. (And thanks to a 2021 refurbishment that freshened every space, SeaDream II hides its age beautifully.)

Crew members are friendly, sociable and funny, and cater to your every need -- often before you've thought to ask. The food is outstanding, and itineraries are devised to take you away from the crowds and treat you to smaller islands and ports. Nobody wears a tie in the evening, and if the weather is right, most meals are taken outside.

One of the biggest perks: You won't have to worry about being nickel-and-dimed. Nearly everything is included, from Champagne and cocktails to gratuities, water sports and mountain bikes. Crew members lead hikes and bike rides for no extra fee, and the ship holds elaborate barbecue beach parties. Champagne, caviar and water sports are held on every Caribbean itinerary.

So, what are the downsides? Excursions will be canceled if the minimum number isn't achieved. SeaDream II does rock and roll in rough seas; you'll feel the movement even when it's calm. And although the unstructured environment is great for passengers who like their independence and don't want a packed schedule of onboard events, there isn't much to do if it rains.

The biggest drawback is that once you cruise on SeaDream, you might never be able to return to the bigger cruise ships, no matter how luxurious. Once you try yachting, cruising might never be the same.

Why Is SeaDream II a Luxury Ship?

Yes, SeaDream II is a luxury ship, though you won't find the typical luxury design flourishes (chandeliers, marble, granite and crystal everywhere) that you might on more traditionally luxurious vessels. Instead, SeaDream II lets its exceptional intuitive service, inventive cuisine and mostly inclusive fares speak to the luxury experience.

SeaDream II's commitment to a yachting style means you never will go far without someone asking you -- by name -- what they can do to make your journey more pleasant. (Observant cruise guests might catch a crewmember on Day 1 with a list -- including headshots -- of passengers. From then on, it's "Hello, Ms. McDaniel. What can I get for you today?")

Still, luxury touches abound, from the welcome Champagne bottle to the excellent selection of cigars for sale and the surprisingly decked-out spa, complete with complementary sauna and steam shower.

You will pay for many of the inclusions indirectly, as cruise fares are higher than on the big ships (they start at around $700 per person per day), but if you take advantage, you will get a lot for your money.

Tip: Wi-Fi isn't included in your cruise fare, purposely so to try to cap users, as, frankly, it's slow. It's not suitable for more than email and quick messaging. If you need to video chat -- for work or to catch up with loved ones -- you'll have to look for a spot in one of the ports you visit.

SeaDream II focuses on mostly small ports in the Caribbean and Europe, many of which have a touch of glam about them. Think St. Barths, Jost Van Dyke and Tobago in the Caribbean, an Cannes, Saint-Tropez, Capri and Monte Carlo in the Mediterranean.

The cruise line tries to plan itineraries where the ship is tendered as often as possible, so passengers can use the marina facilities, but weather and port logistics will ultimately determine where and when sports are offered.

Tip: Sign up for marina use the first day by filling out a waiver form. That way, you will be ready to go when it opens up.

For SeaDream II, the ports and itineraries are the reason to sail. A handful of excursions are available in each port, ranging from smaller investments like snorkeling to big-ticket items like a two-tank dive. (Be forewarned: All excursions are subject to cancellation if a minimum of passengers don't sign up. Also, when weather is bad -- especially windy -- the ship might not visit the intended ports, and while the crew do their best to find great replacements, the options might not always live up to expectations. Those who would rather not participate in formal excursions often work with the concierge onboard to find the best on-your-own options ashore.

In addition to formal fee-required excursions, you'll also find a handful of free, crew-led options, such as guided walks and bicycle rides. Bikes are available to borrow if ports allow for it.

SeaDream might be most famous for its Caviar Splash beach party, where the crew rolls out the sand carpet shoreside -- or in the sea itself, if the weather and tides permit -- loading a paddleboard with caviar and all the fixings, along with free-flowing Champagne. There's also a killer barbecue lunch, with ribs, burgers, salmon and much more. It's a fun, free indulgence that includes sprays of Champagne and what seems like unlimited caviar. For cruise line loyalists, this is the party they most look forward to enjoying.

Tip: Even if you aren't a caviar or Champagne fan, don't skip the party. Your fellow guests -- and crewmembers -- really cut loose, and the atmosphere is fun and breezy. You'll have plenty of other options for food and drink.

SeaDream II deck plans comprise five passenger decks. Most of the action takes place in the outdoors, which includes the fun Topside Restaurant, the Top of the Yacht Bar, a sundeck with two Jacuzzi tubs, a pool deck with lounge space, Balinese sunbeds and a marina that opens when the weather is good, allowing guests to swim and play with water toys (including waverunners and standup paddleboards) from the ship.

Other highlights of SeaDream II's deck plans include a surprisingly large spa and adequate fitness area. Additionally, a golf simulator was added in 2021, giving guests a chance to work on their long games while onboard.

Another upgrade during the renovation: the worn teak decking on the outdoor decks was replaced with composite material designed to last longer and standup to the wear and tear of sunshine and saltwater..

What Does the Interior of SeaDream II Look Like?

SeaDream II is an older ship, but it underwent a massive renovation in 2021 that has it feeling newer. Cabins were completely redone, with modern furniture installed, Furniture and carpeting throughout the ship also got an upgrade.

The ship still is several decades old, and public spaces like the Main Salon lounge space and the concierge foyer still look a bit dated, though not distractingly so.

Who's Onboard SeaDream II?

Guests on SeaDream II span a surprisingly large age range, from 30s to 80s. Most are couples, predominantly from North America when the ship sails in the Bahamas and the Caribbean. When the ship sails in the Mediterranean, you'll have a far more diverse passenger group, with an additional mix of Europeans and Australians. Because of SeaDream Yacht Club's Nordic roots, you can expect a healthy dose of Norwegians and Swedes on many sailings.

Groups are common onboard SeaDream II, where longtime friends get together to share the yachting experiences. Guests are especially loyal, with a huge percentage on every sailing being repeat customers.

Most passengers are well-off professionals and retirees who often travel and are used to doing it in style. Guests know what they want and aren't afraid to ask for it -- and SeaDream's policy of not saying no fits that passenger expectation perfectly.

Kids on SeaDream II are not a common sight onboard, though the cruise line permits those 12 months and older onboard. Those kids accustomed to chatting comfortably with adults will do best, as the ship doesn't offer any children-specific programming or spaces. It's more common to find kids on SeaDream II during the summer and holiday sailings.

Guests on SeaDream II tend to be super social. If you're a couple who prefer to spend time alone, you can still do so on the ship, but you'll have a much better time if you are open to having dinner and drinks long into the evening with new friends. Passengers stay up late and sleep in the next day.

It's worth noting SeaDream II can't easily accommodate guests in wheelchairs or those with mobility concerns. The ship offers only one accessible cabin, and it has no public restrooms that are accessible. The ship does, however, have an elevator that runs from decks 2 to 5, but with so many tender ports, it requires tendering or Zodiac rides in most ports, meaning disembarkation is difficult for those who can't maneuver easily from ship to small boat and back.

SeaDream II also is an older ship, lacking some of the stabilization that many modern ships have; the small ship can be rocked by waves, especially on ocean crossings or when weather is poor seasonally. Maneuvering halls and stairways when this is happening can be challenging for all guests. If you're looking for a better option for wheelchair users, check out our guide to accessible cruising.

SeaDream II Dress Code is All About Yacht Casual

By Day: Bathing suits are appropriate pool and deckside, although people don stylish cover-ups in the dining areas. Shorts, T-shirts, activewear, capris and sundresses dominate in the ports.

At Night: "Yacht casual" is the style for all guests. For men, that usually means collared shirts, either Polos or button-downs, often with boat shoes or loafers. Some choose to wear a jacket, but no one wears ties. Women tend to dress stylishly yet informally in the evenings, in casual dresses, slacks or capris with a fashionable top. Stylish sandals are the most common footwear; you won’t want heels with rolling seas. Dinner in the main dining room is generally a tad dressier than dinner under the stars at the Topside Restaurant.

Not Allowed: The ship requests that people do not wear jeans/denim, shorts, skorts, T-shirts, flip-flops, tattered/torn clothing, or bathing suits to dinner or in the public areas in the evenings. (That said, we did see men wearing shorts to the outdoor dinners, and women and men wore dressier jeans of all colors.)

Tip: Don't underestimate the need to pack long-sleeve tops and pants. Even in the warm Caribbean, cruising can be breezy, and with so many activities taking place outside, you can quickly get chilly. A light windbreaker or scarf/shawl can help out.

All passengers sailing on SeaDream II must be fully vaccinated against COVID-19 at least two weeks before sailing.

Onboard
· Masks are required in all indoor public spaces
· Fitness center capacity restricted to four people, and sessions to one hour
· Disposable plastic gloves required at self-serve buffet
· All crew wear masks all the time
· Sanitation signage

· Some ship excursion "bubble" tours required, depending on port

Protocols are up to date as of this writing but can and will change often. For the most updated rules, check with SeaDream Yacht Club before your sailing.

Limited onboard entertainment, especially if you don't like to socialize over drinks

Just returned from 1 week Caribbean cruise on Sea Dream II - first time with Sea Dream. Traveled with my husband and 86 year old mother. We all had a great time.Read More
HHB fun

Best cruise we ever took

I cannot imagine taking any other cruise line after being on the SeaDream II. They really know how to make you feel special and how to give you an unforgettable vacation.Read More
gwennw

5-Star Cruise, but Could Have Been Better

My wife and I sailed on the SeaDream II out of San Juan in February. We have cruised many times on the mega ships, but have since transitioned away from cruising.Read More
BDMCruiser