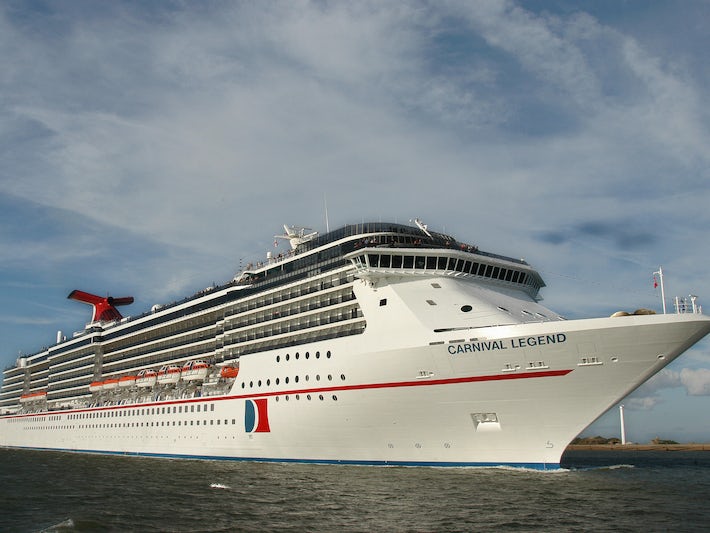 Carnival Legend is the third ship in the Spirit Class, which introduced some significant firsts for Carnival, including alternative restaurants and onboard wedding chapels. Spirit-class ships also offer an impressive 80 percent ratio of outside cabins, as well as lots of nice little touches like museum-quality artwork and "designer" martinis.

Outrageous decor is not to everybody's tastes

Family-friendly ship with American touches but an Australian vibe

The ship offers an active onboard atmosphere with the Green Thunder and Splashdown children's water slides, a drenching bucket, RedFrog Pub that sells Aussie beers (including the specially crafted Thirsty Frog Summer Ale) when its sailing in Australia, and the Cherry on Top candy store. On the entertainment side, Carnival Legend features Playlist Production music shows (think Motown and Epic Rock shows), as well as family entertainment that includes Seuss at Sea and Hasbro, the Game Show.

Although refreshed in 2014, the decor of the main public areas remains unchanged, and the central theme onboard Carnival Legend -- great legends of the world -- is carried throughout the ship's 12 passenger decks, 16 lounges and indoor and outdoor promenades. Many Australians not used to the glitz and neon of Carnival Cruise Line's ships are likely to find the "legends" and the Grecian urn motif a bit much, not to mention the huge painting of Colossus straddling the central atrium area (rather than Rhodes).

Get Carnival Legend price drops
250,000+ people have entered their email

At 88,500 tons and carrying 2,124 passengers (2,680 at full capacity), Carnival Legend just skirts the high side of midsized -- large enough, but not particularly crowded, except at breakfast and lunch in the buffet. We found it quite easy to find our way around soon after boarding, and the Carnival crew were always ready to lend a helping hand when needed.

Carnival Legend splits its time between Australia and Alaska, with two very different demographics depending on where it's based. In the U.S., the ship carries a broad cross section of (mostly) Middle America, with a large contingent of Canadians, as well as people from Britain and Australia. (In particular, there are usually lots of Australians on the ship's last Alaska voyage, as well as its trip from Alaska to Hawaii.) According to Carnival, 30 percent of its passengers are younger than 35, 40 percent are between 35 and 55, and 30 percent are older than 55. While cruising in Australia, the ship carries a similar profile of Australian passengers (as well as a fair contingent of New Zealanders) in the 35-and-older age group. As the ship is based in Australia over the summer, including the six-week Christmas and January school holidays, there are plenty of families. Cruisers who want to avoid kids should travel between October and mid-December and from February to April (but not Easter).

Daytime: Carnival has a pretty laid-back dress policy with jeans, shorts, T-shirts and bathing suits common throughout the ship.

Evening: Most evenings are Cruise Casual, where passengers can wear anything from smart jeans (no cutoffs) and dress shorts to trousers and casual skirts or sundresses. One or two nights per cruise will be designated Cruise Elegant. Men are requested to wear dress trousers and dress shirts, with jackets optional. If men want to wear suits or tuxedos, then they are free to do so. Suggested attire for women is cocktail dresses or gowns, or dressy trouser suits or skirts. Many people do like to dress to the nines on these Cruise Elegant occasions and pose for photos while other passengers watch these proceedings in the Atrium Bar. With that said, we've seen plenty of folks show up to dinner on these nights in their usual casual attire. A two- to five-night cruise will have one Cruise Elegant night. Cruises of six nights or longer will have two.

Not permitted: As long as you're not wearing swimwear and workout clothes, and men don't wear sleeveless T-shirts or tank tops, you won't be turned away from the dining room.

Find a Carnival Legend Cruise from $334

Where does Carnival Legend sail from?

Where does Carnival Legend sail to?

How much does it cost to go on Carnival Legend?

Cruises on Carnival Legend start from $334 per person.

Is Carnival Legend a good ship to cruise on?

We really enjoyed Legend and are looking forward to sailing her again in February.Read More
sparks1093

Smoke and other smells

Our next two cruises are not with Carnival.Read More
Namaste3

tours already paid about 1200.00 for his ticket and you want 75.00 to be dropped off at 8am and pickedup at 1pm he cried the entire cruise only time he was happy is Princess Cay that something I think my carnivalRead More
gregory1