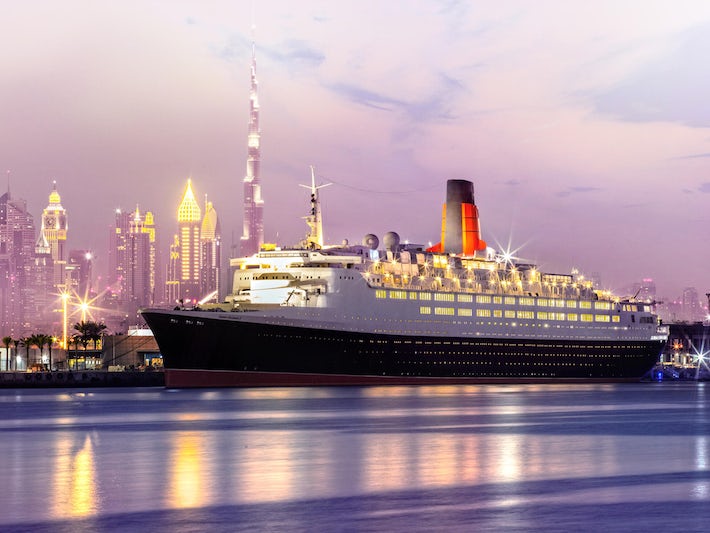 Queen Elizabeth II, or QE2 as it's popularly known, retired from cruising in 2008 after some 40 years in service (launched in 1969). The ocean liner, one of cruising's most storied vessels, was sold in 2007 for $100 million to Istithmar World, the investment arm of state-run Dubai World. At the time, Dubai World's developer, Nakheel, outlined a grand plan to transform the iconic ship into a luxury floating hotel, boasting features from a West End-style theater to a glass penthouse complex where the iconic fire red funnel once stood. Hit hard by the worldwide recession, Dubai World became saddled debt, and QE2 has been languishing at Dubai's Port Rashid since arriving there in November 2008. Plans to dock the QE2 in South Africa as a floating hotel during the 2010 FIFA World Cup were scuppered.

In 2012 a consortium -- QE2 London -- was formed to buy the ship back from Dubai and moor her opposite the O2 Centre and alongside ExCeL in the Docklands area of London. The following year a Singapore-based consortium agreed to buy it and turn it into a floating hotel in Hong Kong harbor, but this too fell through.

In April 2018, after a year-long refurb, the ship entered a new chapter of its life, finally re-opening its doors as a floating luxury hotel, based in Dubai. While cabins have been fully modernized, public rooms have kept QE2's most famous design features, including period furniture, paintings and memorabilia. There is also the QE2 Exhibition, an interactive museum that showcases the QE2 when the ship was a pioneer in design, technology and lifestyle adjacent to the lobby.

The past is filled with highs and lows.

Here are some tidbits about the famous queen's long career you can use to wow friends and strangers alike (many taken from Carol Thatcher's QE2: 40 Years Famous).

The Beginning: When QE2 entered service on 22 April, 1969 (with an eight-day preview cruise stopping at Las Palmas, Tenerife and Lisbon), two stowaways were discovered. The ship had to turn back shortly after departure to rendezvous with a pilot cutter and get rid of the extra baggage.

Even Earlier: More than 3,000 people worked on the construction of the ship. Computers -- quite a novel idea at the time -- were used extensively to guide the construction process, analyzing how many workers were needed, and to keep a tally of costs and progress.

A Near Miss: Following QE2's first visit to Israel in spring 1974, the Egyptian military considered sinking QE2 to avenge the deaths of more than 100 passengers killed when Israel show down a Libyan airline in 1972. However, Anwar Sadat, Egypt's president, countermanded the order to destroy the ship.

War service: In May 1982 the ship took part in the Falklands War, carrying 3,000 troops and 650 volunteer crew. She was refitted with three helicopter pads, the transformation of public lounges into dormitories, and fuel pipes that ran through the ship down to the engine room to allow for refuelling at sea, and the covering of carpets with 2,000 sheets of hardboard. The Celebrities: Among the famous feet to walk the ship's hallowed halls were Nelson Mandela, David Bowie, The Cure, Elton John, Ringo Starr, Neil Diamond, Richard Burton, Elizabeth Taylor and of course British royalty of every stripe and hue.

The Danger: In September 1995, the ship encountered a 95 ft. rogue wave when sailing through Hurricane Luis. Hundreds of tons of water broke over the bow, but most of the passengers slept through it!

The Disgusting: In April 2005, while en route from Southampton to Madeira, QE2 ran into the body of a decomposing whale. The captain estimated the animal was 60 feet long, but luckily no damage was done to the ship.

The Records: Before she was refitted with a diesel power plant in 1986/87, QE2 was also the last oil-fired passenger steamship to cross the Atlantic in scheduled liner service.

Only on a British Ship: On QE2, 912,500 tea bags are consumed annually, and over 2 million doilies are used.