Explorer of the Seas Review 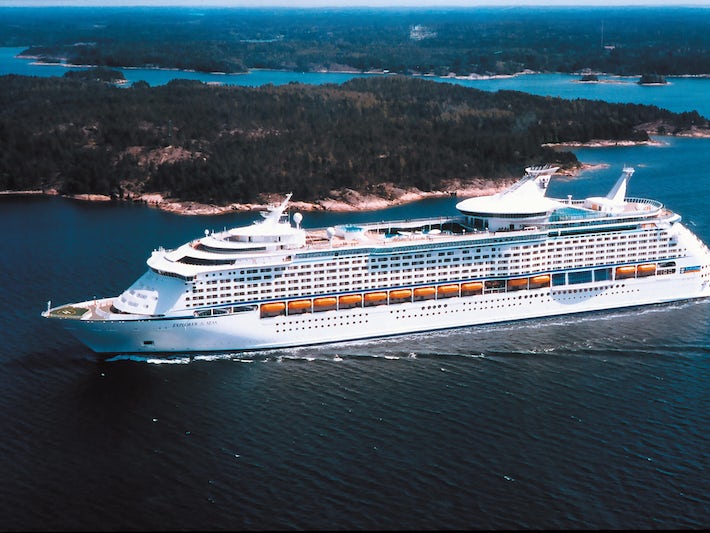 The second of five in the revolutionary Voyager-class series that started with Voyager of the Seas in 1999, Explorer of the Seas follows the floating resort concept, with a wealth of entertainment, facilities and activities that will appeal to every age group.

Designing a huge cruise ship is never easy, but Explorer of the Seas’ deck plans are an improved version of Royal Caribbean’s older ships. The majority of cabins are located on stateroom-only decks, which allows for quiet nights. The decks that could be more problematic for light sleepers are decks 2, 3 and 6, as they are located below, above or adjacent to loud public spaces that get foot traffic until the wee small hours. Those, and a few aft cabins with obstructed views are the only rooms to avoid on Explorer of the Seas.

A clever layout feature of Royal Caribbean’s Explorer of the Seas is that restaurants are not all packed into one or two decks but spread out over multiple levels. This keeps crowds at peak times at a minimum – though Explorer of the Seas has a capacity of 4,290 passengers, so expect to share space with a lot of people. 16 elevators help keep a nice flow of guests as well.

The Royal Promenade is the heart of Explorer of the Seas. You feel like you are in an upscale mall as you walk this longer-than-a-football-field and wider-than-three-lanes-of-traffic boulevard anchored by two atria that are marvels of marble and colossal sculpture. Diversions on the promenade include shops selling everything from ship's logo items, to cheap accessories and designer merchandise.

For the most up-to-date testing, masking, and vaccination requirements aboard Adventure of the Seas, please refer to Royal Caribbean's Health and Safety protocols. You can also use Cruise Critic's guide to health requirements on the world’s major cruise lines as we know them.

A wealth of facilities, activities and entertainment for every generation

With a broad range of activities, Explorer has something for everyone, from active cruisers to families

Costs Not Included With Your Cruise Fare

· Daily gratuities (amounts vary depending on cabin category)
· Auto-gratuities of 18 percent applied to salon, spa and beverage purchases, as well as most specialty dining reservations
· Drinks excluding water, tea (including iced tea), coffee and selected juices from the Windjammer Marketplace buffet
· Room Service (flat rate) except for continental breakfast
· Most specialty dining
· Most fitness classes and all treatments and services in the spa and salon
· Sessions in the Escape Room
· Activities like bingo, arts and crafts, arcade games, alcohol tastings and shopping events
· Casino play
· Late-night activities in the Adventure Ocean kids’ club
· Shore excursions
· Internet access; Explorer of the Seas Wi-Fi can be accessed by purchasing an internet package
· Photos and artwork

Royal Caribbean typically appeals to couples and singles in their 30s to 50s as well as families of all ages. The median age is in the low 40s on seven-night cruises and in the 30s on three-and four-night cruises. Passengers 50 to 55 and older tend to dominate 10-night and longer cruises. Royal Caribbean attracts passengers that are looking for an affordable, active vacation.

Daytime: During the day, dress is casual.

Evening: Evenings are either casual, smart casual or formal. On casual nights, suggested attire is sports shirts and slacks for men and sundresses or pants for women. On smart casual evenings, ideally men should don jacket and tie and women dresses and or pantsuits. On formal nights on Explorer of the Seas, men can opt for a tuxedo, though a simple sports coat and tie is becoming the norm, while women should wear cocktail dresses or gowns.

Not permitted: Shorts are not allowed at dinner, regardless of the venue (with the sole exception of the buffet).

Get Explorer of the Seas price drops
250,000+ people have entered their email

Find an Explorer of the Seas Cruise from $196

More about Royal Caribbean Explorer of the Seas

Where does Royal Caribbean Explorer of the Seas sail from?

Royal Caribbean Explorer of the Seas departs from Miami, Rome, Civitavecchia, and Venice

Where does Royal Caribbean Explorer of the Seas sail to?

How much does it cost to go on Royal Caribbean Explorer of the Seas?

Cruises on Royal Caribbean Explorer of the Seas start from $196 per person.

Is Royal Caribbean Explorer of the Seas a good ship to cruise on?

Still a great RC experience, but this ship has needs.

The Explorer of the Seas is a beautiful ship. We loved the coziness of it. Embarkation was a cluster and many waited a long time! Lack of staff was part of the issue.Read More
Csummers12

Mid-Sized Ship with some Positives...and some Challenges

Here’s my review of our cruise on Explorer. We sailed from Miami (Terminal G) from July 3-9. Fast facts: • We stayed in an Owner’s Suite (cabin 1292 on Deck 10).Read More
HighTaxLowTax

So happy to return to cruising

We enjoyed the food in Giovanni's, but the lack of staff was very apparent here. Our waiter brought us the wrong order on each course. Our dinner at Chops was much better.Read More
RobinKS

Staff and supply shortages on an 80% Passenger load

First time I have felt taken advantage of by RCL. Cruising the Explorer is not like cruising on the other ships.Read More
ThelmLou