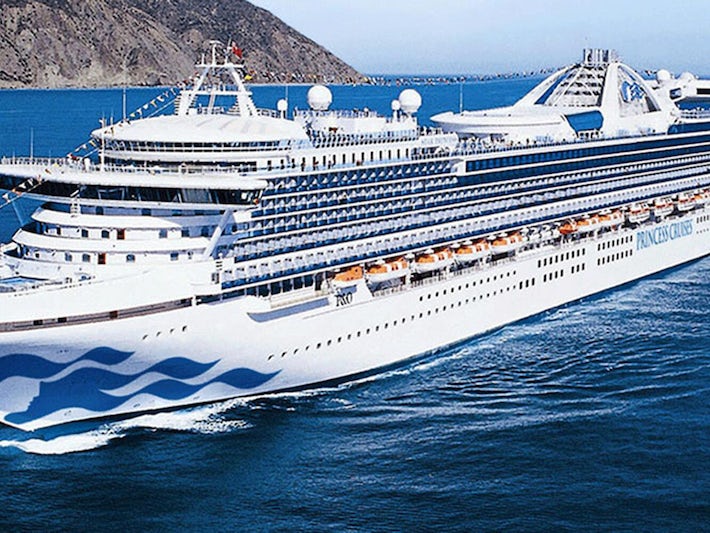 Golden Princess has been removed from the Princess Cruises fleet. It will enter service with P&O Australia in 2021 as Pacific Adventure.

Lots of options for dining, drinking and swimming, and a high ratio of balcony cabins

A great all-rounder for passengers of all ages

Golden Princess, a vessel measuring 109,000 tons with a double-occupancy capacity of 2,600 passengers, splits its time between Australia, New Zealand, the South Pacific and Asia. In October 2015 it became the largest cruise ship ever to be based in Melbourne.

The ship's size means there is plenty of space for four swimming pools, nine whirlpools, 10 restaurants and cafés, and a wide range of entertainment venues. More than half of the cabins have private balconies, which suits its scenic destinations.

Its distinctive stern has drawn comparisons to the handle of a shopping cart (shopping trolley, if you're Australian) or a car's spoiler. This long, narrow section, suspended above deck 15, is actually a nightclub called Skywalkers, which is reached by a moving ramp along a bridge.

While the ship's design was created more than a decade ago, it was refurbished in early 2014 with minor cosmetic work and a major reconfiguration of the Horizon Court buffet area to improve the flow. Golden Princess also has the Crown Grill restaurant, Sabatini's Italian, and the adults-only Sanctuary, made popular in the line's newer Crown Princess series of ships.

Our favorite onboard spaces include the following:

The Piazza is the perfect onboard hub, surrounded by the International Cafe for coffee and anytime snacks. (The aroma of baking cookies and cafe lattes is heavenly.) Vines Wine Bar is also nearby for tapas, sushi and drinks. Clusters of cozy chairs make it the best place to enjoy the street theater-type entertainment, meet with friends or just people-watch.

The two specialty restaurants, Crown Grill and Sabatini's, take onboard dining up a notch. At Sabatini's, you'll eat your way through Italian favorites like antipasto, pasta and tiramisu desserts. The New York-themed Crown Grill expands the typical steakhouse menu to include all sorts of seafood while still offering a wide assortment of premium-grade beef. Both are well worth the extra fee.

The Sanctuary is an oasis of calm for adults, with snooze-inducing cushy lounge chairs, a soothing atmosphere with touches of greenery and the ultimate in pampering -- alfresco massages.

Movies are always better on the big screen, and Princess' pioneering Movies Under the Stars has made its way to Golden Princess' Calypso Reef Pool. Enjoy a concert or sporting event as you splash around during the day, or curl up next to your sweetie under a blanket with some popcorn to take in a feature film at night.

The teens-only sun deck provides this hard-to-please group with an outdoor place to mingle, and the splash pool area, although small, offers parents a tot-friendly place for water play with their preschoolers.

Four pools ease the swim crunch. The outdoor Calypso Reef draws kids, teens and adults, while the covered Neptune Reef provides a climate-controlled space so water enthusiasts can get wet even in inclement weather. The spa's outdoor current pool, targeted for swimmers 16 and older, is peacefully located off the ship's Lotus Spa, while the heated Terrace Pool provides great views at the aft of the ship.

Three show lounges -- the Princess Theater, Vista Lounge and Explorers Lounge -- allow you to find entertainment, no matter what time you finish dinner. Production shows and performances by headline entertainers are repeated three times over two nights, so everyone has a chance to enjoy them.

With supervised activities in the Fun Zone (a children's area for ages 3 to 7 and 8 to 12) and Remix (the daytime teen room), Golden Princess works well for families.

When the ship is based in Melbourne, onboard pricing switches from U.S. dollars to Australian dollars, and some of the food and drinks are changed to cater for local tastes. Don't forget you can bring onboard one bottle of wine or Champagne per adult per voyage.

For more details about cabins, dining and things to do, see the separate sections of this review.”

Golden Princess' demographics change with the seasons. Asia sailings tend to attracts families and multigenerational groups from a more international mix. In Australia, passengers are largely local families and older couples; on short cruises, the crowd is younger, with more singles and groups of friends, but mostly couples and some families.

Evening attire is typically "smart casual," but two or three nights will be formal, depending on the itinerary length; a standard seven-night cruise will have two formal nights. On formal nights, most women wear gowns or cocktail dresses, and men wear tuxedos or dark suits. Men don't need to wear jackets or ties on smart casual evenings, though some do; open-neck shirts are just fine. Shorts and T-shirts, frayed jeans, and swimwear are not acceptable attire in the dining rooms. Passengers generally tend to dress more casually on Australian cruises.

We cannot praise the Captain and staff of the Golden Princess enough! We have just returned from a 13 day cruise to New Zealand that was cut short by 4 days because of the current global crisis.Read More
JillyGilly

We booked this cruise on the Golden Princess for our Golden wedding anniversary. We had to pay an extra $630 above the advertised price in the Herald Sun.Read More
Fred Holmes

I am really impressed with the way the Captain and crew of the Golden Princess responded to constantly-changing circumstances while we were on our New Zealand cruise.Read More
Terri0

Can’t say anymore, don’t think I should have to do a maximum of words Trip was amazing, shore excursions were to expensive, could get them cheaper on shore, for same tours golden princess were offeringRead More
Sherbert54