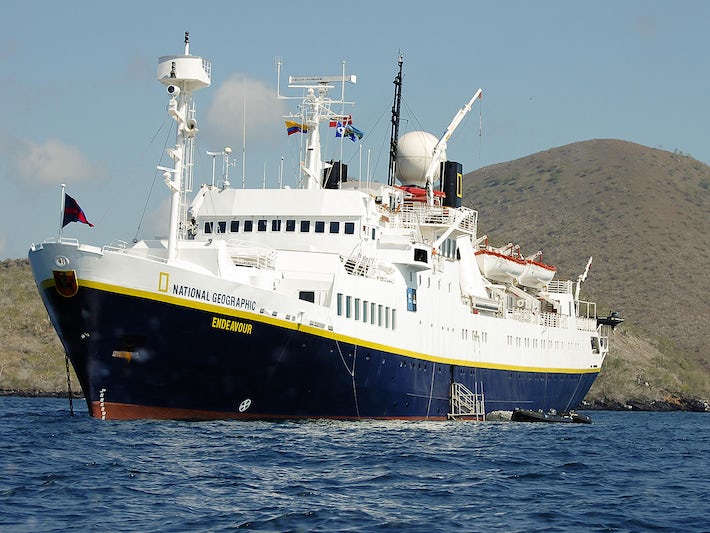 If the old adage of "Don't judge a book by its cover" was ever meant for a ship, then surely it applies to Lindblad's National Geographic Endeavour. Launched in 1966 as a North Sea fishing trawler, its decidedly unglamorous appearance is far removed from the modern lines and glassy exterior of today's cruise ships. Instead, you'll find the ship is a tough, strong work horse rather than a thin-hulled cruise ship lollygagging in the Caribbean. It's got a long, tough bow; a pleasing, if somewhat unusual, profile; and numerous cranes for launching kayaks and Zodiacs punctuating her superstructure. Ultimately, N.G. Endeavour is less cruise ship and more of an expedition ship that manages to blend comfort with exploration.

Understanding the differences between an expedition ship and a cruise ship is vital. You won't find typical cruise ship comforts such as room service, alternative dining venues or even in-cabin TV's. Forget cabins with balconies, casinos and organized shore excursions as well. Instead, you'll use N.G. Endeavour as a base camp while voyaging to some of the most beautiful locations on earth, and you'll find that itineraries are never set in stone. Weather, wildlife and ice conditions might dictate that the afternoon's plans aren't decided until, well, the afternoon. Rather than attending a shopping lecture, you'll spend your trip kayaking amidst Antarctic icebergs or happily waking up at 2 a.m. when you hear a ship-wide announcement saying that a curious polar bear has been spotted ambling over to the ship to take a closer look.

Without all of the regular cruise ship trappings and amenities, how can Lindblad Expeditions get away with fares that are equivalent to the top luxury lines and anywhere from $500 to $1,000 a day? It does so by delivering extraordinary experiences in the most remote regions on earth, a very high degree of comfort, and a healthy dose of excitement, discovery and pure, simple fun. It's staffed with numerous expert naturalists and equipped with sophisticated toys like a Remote Operated Vehicle that can record remarkable images up to 500 feet below the surface of the ocean.

As you would expect from the ship's name, the National Geographic Society now plays an increasingly important role with Lindblad. Initially announced in 2004, the pair strengthened their partnership in 2007, and today photographers from the magazine accompany each sailing, which allows passengers to get personalized instruction from some of the best photographers in the world. The two companies have also created a joint philanthropic fund to support conservation around the world.

Throughout the year, the N.G. Endeavour sails from one end of the earth to the other. The summer months usually find it in Svalbard, way above the Arctic Circle, looking for polar bears. It then winds its way south, often circumnavigating Britain before poking into the Mediterranean for expeditions with a more historical and cultural bent. From November to March, the ship stays in Antarctica before slowly making its way through Atlantic isles like Tristan de Cuhna and St Helena towards Europe. In the early summer, it will visit Norway before finding its way back to Svalbard. Occasionally, it may instead venture to remote Pacific isles, but with its ice-strengthened hull, it is usually deployed to the polar regions.

For those who worry that a former fishing trawler might be a simple, spartan ship with spare decor and minimalist facilities, think again. In 1983, it underwent a thorough conversion for Exploration Cruise Line to become the passenger ship North Star; the conversion left behind no traces of its past except for its robust hull. Purchased by a new owner in 1989, it was significantly refurbished and renamed Caledonian Star. Lindblad then bought the ship in 1996. Two years later, the ship underwent another major refurbishment to prepare it for worldwide cruising and in 2001, was again renamed -- this time, Endeavour. Finally, Lindblad renamed the ship National Geographic Endeavour in 2005.

Today, it is an extremely comfortable, well-maintained and attractive ship full of charm and character; it reflects the company's belief that expedition does not mean deprivation.

The cozy library is one of the most appealing rooms on any ship, and standard cabins, while snug, are attractively furnished. There may be only one dining room (and breakfast and lunch are buffets, rather than served off a menu), but the food is surprisingly tasty and varied. You can't exactly call this ship luxury, but it is comfortable, pleasing and homey -- and it doesn't take long to feel affectionate towards the sturdy little ship.

Inflatable rubber Zodiacs are an integral part of the expedition experience; they enable you to land just about anywhere (and occasionally require you to wade through the surf to reach land.) You'll also take rides on the Zodiacs where you'll get right up against rocky coasts or circle beautiful ice formations. Endeavour also carries 24 double person, inflatable kayaks, and anyone (including beginners) can paddle these comfortably, safely and easily.

Other clever tools include a video microscope in the main lounge that magnifies images up to 400 times, meaning you can get more up close and personal with the body of a krill than you ever expected. Hydrophones are on hand to record whales singing underwater, and a high definition "Splash Cam" allows the undersea specialist to film the underwater life whenever he dives. (Diving in the polar regions isn't for those with weak constitutions, and Lindblad's naturalists have literally written the book on diving and filming along the Antarctica peninsula.) Equally impressive is the Remote Operated Vehicle. Unique to Lindblad, it records astonishingly beautiful color video and offers sea views that go far deeper than any diver could.

While the technology is a great asset, it doesn't compare to the role that the 11 onboard naturalists will play on a trip. It goes without saying that these veteran guides, many with advanced degrees, are very knowledgeable. Happily, they are also accessible, friendly and enthusiastic. You'll bond with them on guided walks ashore, over meals, and in the bar at night, and with each one having a different knowledge base (geology, biology, etc), we just about guarantee you won't be able to stump all of them with any question.

Lindblad and National Geographic's joint motto of "Inspiring people to travel and care about the planet" emphasizes their strong belief in giving back to the areas in which they sail. Don't be surprised to partake in a forum on climate change, and you'll hear plenty of talk from the naturalists about company-supported conservation efforts. In typically clever Lindblad marketing, passengers are encouraged to support a conservation fund by deducting up to $500 off the next cruise in exchange for donating $500 towards the fund. (In Antarctica, for instance, the money goes towards Oceanites, a research group that conducts studies on penguin populations from the N.G. Endeavour.)

In the end, you choose Lindblad for its excellent enrichment program, the sense of enjoyment and fun it delivers and the knowledge that the Captain and crew go out of their way to deliver an exciting, unique expedition every time. Lindblad traces its roots back to Lindblad Travel, which lead the first cruises to Antarctica and the Galapagos and helped create the industry now known as eco-tourism. The company works hard to keep that pioneering, adventurous spirit alive, and while you're ensconced in snug surroundings, you'll venture to places that even other small ships don't go.

Editor's note: The National Geographic Endeavour has stabilizers and is a superb sea-keeping ship. Many of the routes it sails, however, may take it over rough weather, and being small, the ship may move around far more than any large cruise ship sailing the Caribbean ever will.

Ship design is functional rather than sleek and modern

With expeditions on the N.G. Endeavour costing anywhere from $500 to $1,000 per day, fellow passengers are usually well traveled, well educated and well to do. Taking an active interest in the world, they want to see, do and learn as much as possible. They often choose to be woken up in the middle of the night if the midnight sun is creating beautiful colors for photography and will be in bed by 10 p.m. so that they are ready to be up on deck before breakfast. They are willing to pay the oft-substantial premium for a Lindblad trip in order to get the best expedition possible.

Very few would regularly choose to take a typical large ship cruise, and a large percentage will have traveled with Lindblad before or have traveled on other expedition-oriented trips. The average age tends to be in the 50's and older, but you will find a few couples in their 30's and 40's in addition to families. This age increases on the longer ocean passages and less adventurous cruises, and is somewhat lower when the ship is in the polar regions, as younger, more adventurous passengers sign up for a "trip of a lifetime." Most everyone onboard is friendly and interesting and enjoys getting to meet like-minded people.

Dress onboard is very casual, and during the day, you'll find people wearing what they need for going ashore or kayaking. After a clean-up shower and a fresh shirt, most evenings are similarly casual, with sweatshirts and jeans common. There are a few nights, however, (such as the Captain's cocktail party evening) when a large majority, but not all, passengers choose to dress up a bit with a jacket (but rarely a tie), a sweater or a nicer set of slacks. Despite the lack of a formal dress code, few cross the line from casual to sloppy.

Women can leave behind the jewelry and lots of make up, as that level of dressing up is simply not done onboard.

Editor's note: Not quite sure what clothes to bring on an expedition? On its Web site, Lindblad offers a recommended packing list -- and even sells the appropriate items. For ultimate ease, there are packages offered that are geared toward particular destinations. Trust the Lindblad packing list -- and buy the clothing packages if you don't already have what they recommend.

Pricey — But Worth It

They are understandably discreet about other ships, but various comments made it clear that the National Geographic Endeavor is a favorite ship to work on.Read More
rlb1950

This ship is going into port now to be refurbished, and no-one is sure what it be like once that is done.Don't break anything though because there are no xray machines on board and there is only one bed in the Dr's office, which is very small.Read More
audacious2

She selected National Geographic (NG) based on the itinerary, relatively small passenger size (96), and recommendations from her sister (on other NG trips).Read More
terran_explr