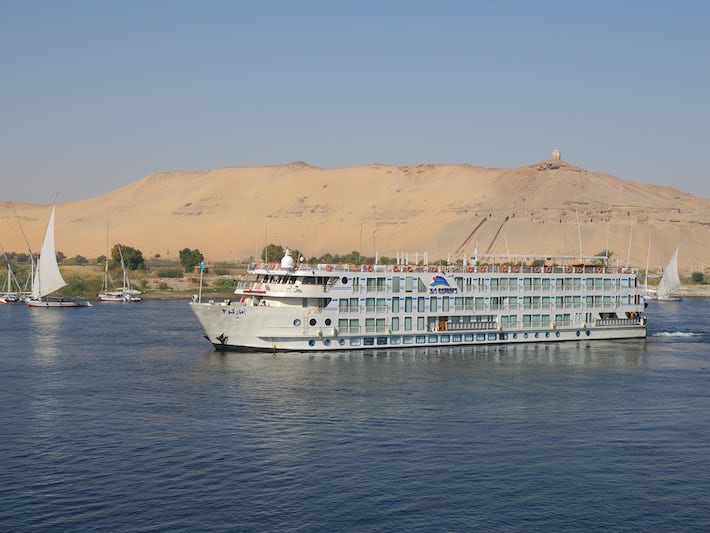 MS Antares is one of four Nile vessels owned and operated by the world's largest river cruise line. Unlike the trio of contemporary ships -- Viking Ra, Osiris and Aton, the latter debuting in 2023 -- which all have the line's trademark understated Scandinavian decor, the 62-passenger MS Antares has a more traditional feel.

Built in 2007, the ship was fully renovated in 2018 and Viking acquired it in 2020. After Viking Ra, which carries just 52 passengers, it is Viking's smallest ship on the Nile in relation to passenger numbers and provides very high levels of personal service with a crew of 75.

During the renovation, the vessel was reimagined to international standards. Accommodations on MS Antares are particularly spacious. Staterooms range from 290 square feet to 829 square feet (compared with 232 square feet to 525 square feet on Viking Osiris and Aton and 291 square feet in all categories of staterooms on Viking Ra).

There are 31 river-facing staterooms across three decks, starting with four cabins on the main deck with are conveniently situated close to guest services and the lounge and have French balconies. The remainder are on the middle and upper decks and the majority have French balconies, with standard cabins measuring starting at 290 square feet and those in the Deluxe French Balcony category measuring 430 square feet.

Only two suites have walk-out balconies. These are the pair of 592-square-foot  Veranda Suites situated forward on the middle deck. The balcony is accessed from the bedroom and there is also a French balcony in the separate sitting room. The ship has one Explorer Suite, which is also located forward and situated on the upper deck. Measuring 829 square feet, the largest stateroom also has separate sleeping and living areas but does not have a walk-out veranda. Instead, it has two French balconies facing both the port and starboard sides of the vessel. Additional perks for passengers staying in the Explorer Suite include a welcome bottle of sparkling wine, mini-bar that is replenished, coffee machine and daily fruit plate.

MS Antares has main lounge with a bar, restaurant that operates on an open seating basis, library and small shop. The sun deck has loungers, chairs and tables. An elevator serves the three cabin decks.

Unusually for a Viking riverboat, MS Antares has a health club with exercise equipment and a spa with massage services, a steam room and sauna. These amenities are not included on the line's other three Nile vessels or European river vessels. In common with the other three ships in Egypt, MS Antares also has a small pool on the sun deck.

The ship sails on the 11-night Pharaohs & Pyramids round-trip Cairo itinerary which includes four nights in Cairo, with excursions to sights including the pyramids, and a seven-night cruise to Luxor and back.

The ship measures 236 feet and carries 62 passengers at full occupancy with 75 crew.