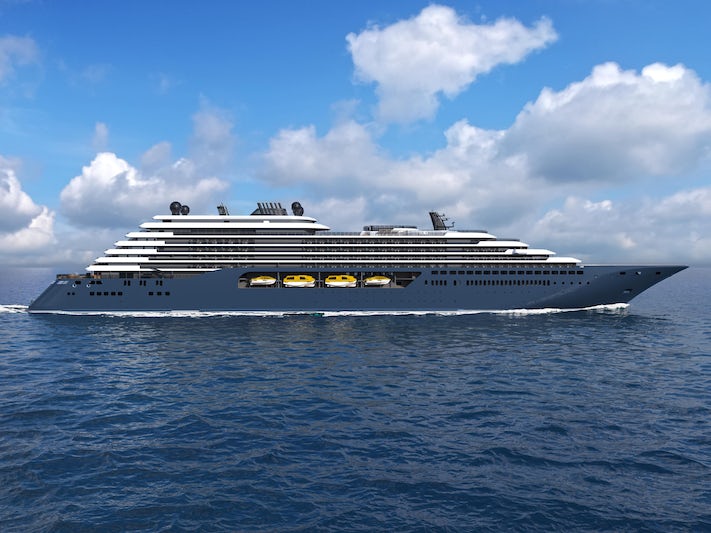 The Ritz-Carlton Yacht Collection's fleet will expand to three with the launch of Ritz-Carlton Luminara in 2025. The luxury hotel brand, which is a subsidiary of Marriott, moved into the cruise sector with the launch of its first 298-passenger "superyacht" Evrima in 2022. Luminara, like its sister ship Ilma launching in 2024, will carry 456 passengers and be powered by liquefied natural gas (LNG), which is currently the cleanest marine fuel.

Being built at the Chantiers de l'Atlantique shipyard in France Luminara, and its sister vessel Ilma, are both larger the Evrima which was constructed in Spain. As a result, they feature a larger number of cabin categories, including a two upper suite categories measuring where staterooms measure 1,076 square feet. Ritz-Carlton claims the ship, with Ilma, will offer the highest space ratios at sea. All 228 suites have private balconies.

Luminara will offer five restaurants, six bars, a wine vault and a marina platform. There is also a Ritz-Carlton Spa and standalone area for the Ritz Kids program. With nearly one crew member for every guest, the ship will provide very high levels of personal service and amenities, such as private cocktail receptions on the bow for groups.

Chantiers de l'Atlantique has been responsible for developing Luminara's environmental credentials which include LNG-powered engines to reduce emissions, an advanced wastewater treatment system, LED lighting and a heat recovery loop to re-use heat from the engines.

Ritz-Carlton Luminara Has Been Created by an International Design Team

The line says the onboard experience will reflect the "sublime comfort" for which Ritz-Carlton is known. Luminara has been created by a team of international designers including London-based architect and design firm AD Associates -- which has been involved in a number of high-end cruise ships -- and award-winning lighting designer DPA, whose clients include global five-star hotels, stores, historical buildings and museums. Finnish design studio Aivan developed the exterior of the vessel taking inspiration from the aesthetics of private yacht design.

When is the Ritz-Carlton Luminara Launch Date?

The ship is slated to enter service in 2025 with the exact date yet to be announced.

Ritz-Carlton Luminara Itineraries Will Be in the Mediterranean and Caribbean

Luminara will sail on 7- to 10-night itineraries in the Mediterranean and Caribbean and full details will be announced at a later date. The vessel will also be available for exclusive private charter.

Luminara will be 46,750 gross tons and carries 456 passengers at full occupancy with the exact number of crew yet to be announced.