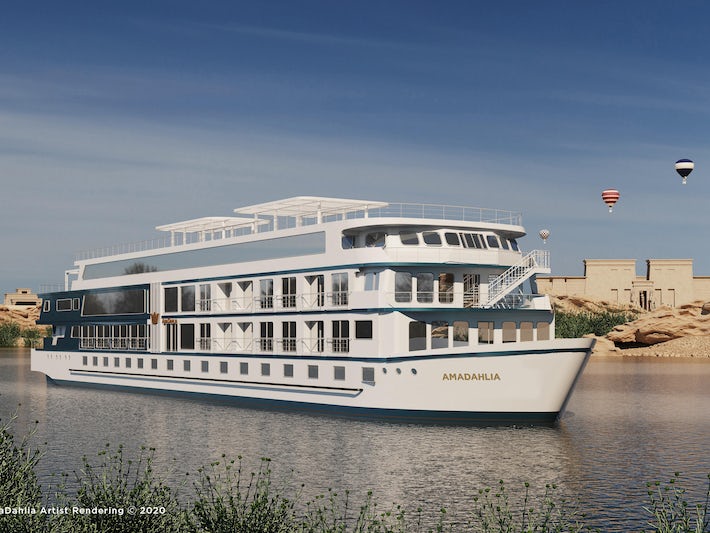 AmaWaterways is launching a second ship in Egypt. Following the first season on the River Nile with AmaDahlia, which debuted in fall 2021, the line announced the sister vessel AmaLilia will come in 2024. The ship will offer an identical itinerary to its sibling -- pairing a week-long sailing with a stay in Cairo -- and have a high crew to passenger ratio.

Traditional Nile ships tend to be quite ornate with Egyptian decor throughout. AmaWaterways has brought the understated elegance of its European ships to the river while still showcasing Egyptian elements through fixtures and fittings, ornaments and artwork. AmaLilia will be very similar to AmaDahlia with some tweaks and updates based on passenger feedback. For example, there will be a different cabin layout with more cabins on the lower deck -- six instead of four -- and on the uppermost passenger deck -- 16 instead of eight on AmaDahlia -- plus more suites.

The ship also has staterooms featuring AmaWaterways' Twin Balcony concept, where the room has both a French balcony and full walk-out veranda, along with a larger living space. These can found in the six Luxury Suites and six Grand Suites, which all measure 430 square feet. These staterooms are also identical, with the Grand Suites located on the uppermost deck and the Luxury Suites situated one deck below. Unlike AmaDahlia, the new ship will have one Owner's Suite, which is on the same deck as the Luxury Suites. This stateroom measures 522 square feet and occupies a prime position overlooking the front of the ship with a forward-facing balcony.

Also similar to AmaWaterways' European vessels is a choice of dining venues. The main restaurant, with views across the river, is large enough to seat all passengers in one sitting. Guests can expect a mix of both regional and Western cuisine.  The smaller alternative restaurant -- Chef's Al Fresco Restaurant on AmaDahlia -- has been brought indoors on AmaLilia and renamed the Chef’s Table. It is at the back of the ship on the top passenger deck, with panoramic views of the Nile. This is a reservations-only specialty restaurant which is only open for dinner. All passengers get to dine there at least once during the cruise on a complimentary basis. An earlybird breakfast and light bites at lunchtime are available in the lounge.

The lounge and bar is located aft on the second passenger deck with views on three sides. It is also used for after-dinner entertainment, including visits by local performers. Other onboard facilities include a bar on the sun deck and small shop.

AmaLilia has an elevator serving all four passenger decks, with stairs up the sun deck.

AmaLilia Will Have Health and Wellness Facilities

Although AmaWaterways' Nile ships are shorter than their European counterparts, they have five decks as they do not have to fit beneath low bridges. This extra space provides room for more facilities that you might normally expect on a vessel carrying just over 70 passengers.

These include a fitness room with weights and cardio equipment, a pool and bar on the sun deck, and a massage room and hair and nail salon. The line actively promotes wellness and passengers can also expect stretching and relaxation classes led by an onboard wellness host.

AmaLilia's maiden voyage will be the 11-night Secrets of Egypt & Nile itinerary departing on March 4, 2024.

AmaLilia Itineraries Will Combine a Nile Cruise and Land Stay

After the inaugural sailing, AmaLilia will continue to sail the same Nile cruise with sister ship AmaDahlia, departing on different days. The 11-night itinerary features a seven-night roundtrip cruise from Luxor, paired with a three-night pre- and one-night post-cruise stay in Cairo to visit the pyramids and other historic sites.

The ship measures 236 feet and carries 72 passengers at full occupancy with 62 crew.