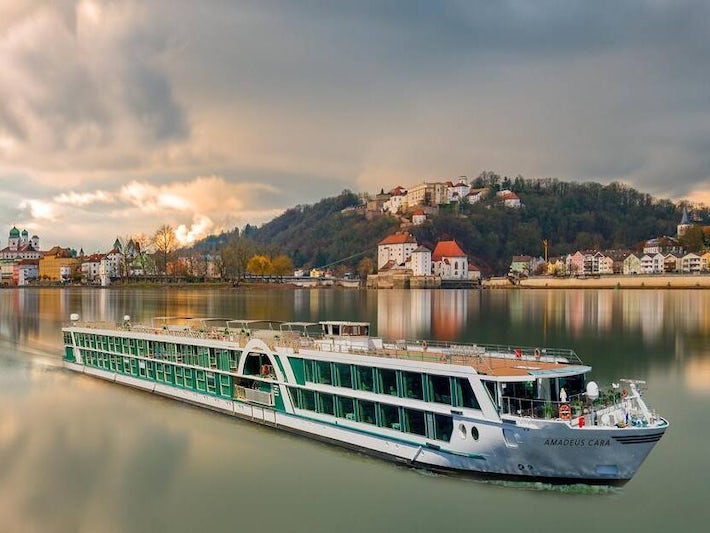 In 2022, Amadeus Cara became the 10th ship to join the fleet of modern vessels operated in Europe by Amadeus River Cruises. Described by the line as a "five star" riverboat, the 162-passenger ship is one of the Amadeus Silver series of near identical vessels which provide flexible a-la-carte cruises -- with optional excursion packages -- for English-speaking passengers.

The 81 river-facing staterooms on Amadeus Cara are situated on three decks -- the lower Haydn Deck, middle Strauss Deck and upper Mozart Deck -- starting with 16 cabins on the Haydn Deck measuring 172 square feet with fixed windows. Interconnecting accommodations are available on this deck.

Situated on the middle and upper decks are staterooms that measure 188 square feet, and that comprise the majority of cabins. Most notably, they all have large walk-closets which are a rarity on river vessels and usually only found in suites. All of these cabins have drop-down panoramic windows -- which can be lowered across the entire width -- mini-bars, 'infotainment' TVs, Wi-Fi, a safe and individual climate control. They can be configured with double or twin beds.

On the Mozart Deck are 10 suites that measure 284 square feet and have larger bathrooms, a living area with large corner sofa and walk-out balcony. Additional perks for suite guests include robes.

Situated on Amadeus Cara's upper deck is an airy main lounge with a bar, variety of seating options and panoramic windows to enjoy the passing scenery. Resident musicians play there in the evening.

The Amadeus Club is a second smaller lounge, situated on the same deck at the back of the ship, which also has a bar. There is also an alfresco River Terrace outdoor sitting area and a sun deck with chairs, tables, loungers, a giant chess set and shuffleboard area. Meals are served in the one main restaurant situated on the middle deck and able to accommodate all passengers in one sitting.

As the ship carries a lower number of passengers than ships of the same size this leaves more space for extra amenities, including a fitness room, and a beauty, massage and hair salon. Amadeus Cara carries a fleet of complimentary onboard bicycles for passengers that want to go out and explore destinations independently. There is an elevator between the three passenger decks and other facilities include a laundry service and small shop.

Amadeus is family-owned with a history going back more than 35 years, making it one of Europe's longest established river cruise lines. Generations of the Luftner family have a very hands-on approach with the design of the ships, personally picking fixtures, fittings and soft furnishings. Interiors also reflect the company's Austrian heritage and Amadeus Cara has a cozy Cafe Vienna based on the coffee houses of the Austrian capital and serving specialty coffees.

When Did Amadeus Cara Launch?

After the inaugural season, including Christmas market sailings, from spring 2023 Amadeus Cara will sail on a variety of 4- to 15-night sailings on Europe's best-known waterways; the Rhine, Danube, Main, Main-Danube Canal and Dutch waterways.  Other themed cruises include springtime Dutch tulip field sailings and Amadeus Cara will also cruise along the lesser-known Lower Danube to the wildlife-rich Danube Delta and Black Sea.

The ship measures 443 feet and carries 162 passengers at full occupancy with 46 crew.