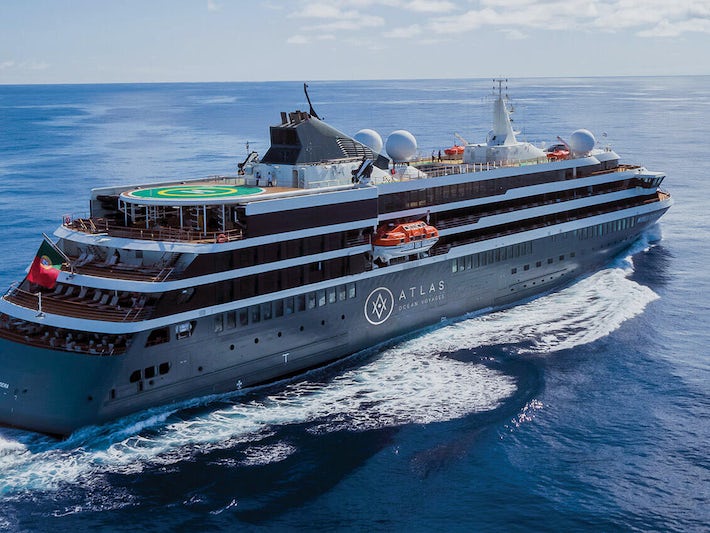 When World Seeker debuts in 2023 it will be the third ship to join the Fort Lauderdale-based luxury expedition line Atlas World Voyages, which is the U.S. brand of Portugal headquartered Mystic Invest Holding. World Seeker will be part of the first-ever ocean cruise line sailing under the Portuguese flag. The 200-passenger polar class ship is the near identical sibling to World Navigator and World Traveller, which launched in 2021 and 2022 respectively, and will be joined by two more vessels through 2024.

Passengers can choose from nine different cabin categories across the 100 outside staterooms. These lead in with a pair of 183 square feet solo cabins -- which notably will not carry a single supplement -- and Adventure category cabins of the same size for two people. The 48 Veranda cabins, which measure 270 square feet, comprise the highest number of staterooms. The largest accommodations are the pair of Discovery Suites, at 445 square feet, and the four 465-square-foot Navigator Suites. There is one accessible cabin.

All cabins have queen-sized beds, which can be configured as two singles, bathrooms with a walk-in shower and L'Occitane toiletries, interactive infotainment system and sitting area. Balconies have teak furnishings and there is butler service for passengers in suites.

Details of the interior decor for the ship have yet to be announced. World Navigator was influenced by classic ocean liners, with rich wood tones throughout and artwork consisting of oil and watercolor paintings, while World Traveller has a yacht-like decor inspired by the Mediterranean, with a blue and white color scheme and black and white paintings. Atlas says World Seeker will have an individual decor of its own.

Dining options include the main Porto restaurant, al-fresco 7AFT Grill, Paula's Pantry for snacks and room service. There are three bars and lounges, a pool, two hot tubs and a small onboard shop.

Elsewhere, there is a L'Occitane spa, gym, watersports platform with kayaks, paddleboards and Zodiacs for excursions, plus a mud room where passengers can change into wet weather gear on expedition sailings.

Itineraries will have a high number of inclusions such as all meals, unlimited premium craft cocktails, wines and other beverages, in-room mini-fridge stocked daily with personal preferences, complimentary cultural immersion on every voyage, private charter jet service between Buenos Aires and Ushuaia on Antarctica expeditions and between Oslo and Longyearbyen on Arctic sailings, emergency medical evacuations insurance and gratuities.

Under construction at Portugal's West Sea shipyard, the ship will be equipped with an energy-saving hybrid propulsion system that uses as little as one-fifth of the fuel of similar ships.  It will have GPS dynamic positioning, to avoid dropping anchor in sensitive areas, and a propulsion system to cruise quietly without disturbing marine wildlife. Additionally, across the fleet Atlas has banned single-use plastics.

When is World Seeker's Launch Date?

The vessel is slated to enter service in 2024 and the exact date has not yet been announced.

Atlas World Voyages has not revealed details of the ship's maiden voyage and inaugural season. However, the line promises cruising to "destinations less traveled". Based on itineraries for its sister ships, passengers can expect a wide choice of sailings to smaller ports of call and cruises to places such as Greece, the Caribbean, Central and South America, Antarctica and the Arctic.