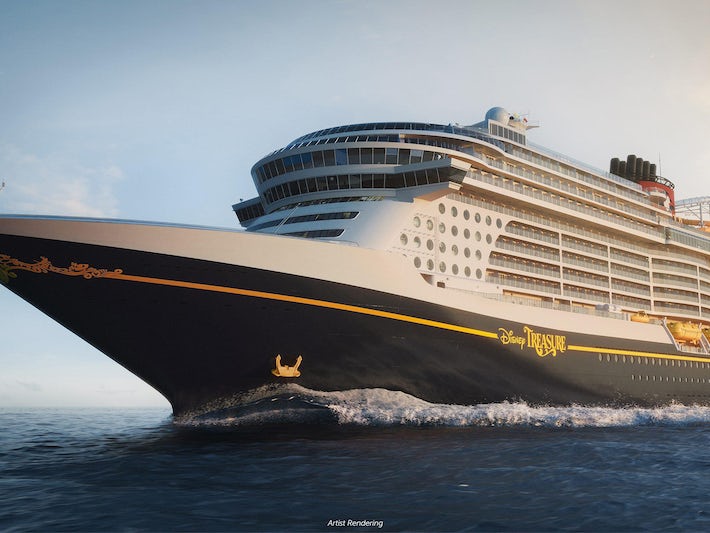 Slated to launch in 2024, Disney Treasure will be the sixth vessel in Disney Cruise Line's growing fleet. The second of the three 4,000-passenger Wish-class vessels which are the largest in the fleet, it will be a sister ship to Disney Wish launched in 2022 and the unnamed third vessel that will enter service in 2025.

Being built at the Meyer Werft shipyard in Germany, the ship will have 1,254 cabins and be powered by liquefied natural gas. Although many features of the ship are still under wraps, Disney has announced Disney Treasure will be designed around the theme of adventure.

In keeping with previous vessels, there will be a signature atrium character statue which is a tradition on Disney's ships. Instead of one character, Disney Treasure will be the first to have three in the atrium called the Grand Hall. Centered on the 1992 movie "Aladdin", the bronze figures will be of Aladdin, Princess Jasmine and the animated Magic Carpet. There will also be an all-new hull motif.

When plans for the ship were announced, Disney Parks, Experiences and Products Chairman Josh D'Amaro said Disney Treasure was inspired by Walt Disney's love of exploration and passengers will be immersed in some of the company's "most legendary" stories. Interior designs will reflect the "grandeur and mystery of a gilded palace", drawing on real-world influences from Asia and Africa as well as the fantasy land of Agrabah from Walt Disney Animation Studios' "Aladdin".

Look Out for Announcements if You Want to Be First Onboard

Disney Treasure is due to launch in 2024 and further details will be announced at a later date.

The launch of Disney Treasure is set to coincide with the opening of Disney's second private Bahamian island, Lighthouse Point. Following on from Castaway Cay, which Disney opened in 1998, the line needed a second destination to cater to its expanding fleet sailing out of the U.S. The 758-acre Lighthouse Point is due to open in 2024 -- the same year as the ship launch -- so it will likely feature on Disney Treasure itineraries, which have yet to be announced.