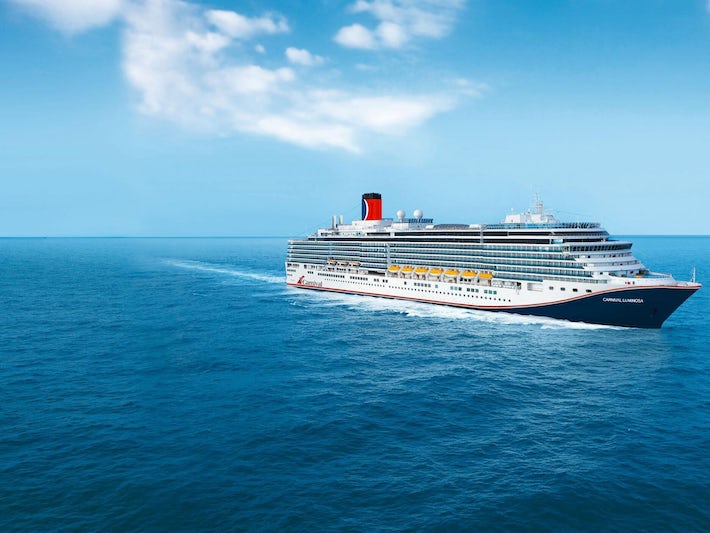 In fall 2022, Carnival Luminosa will become the latest ship to join the Carnival Cruise Line fleet. The 2,260-passenger vessel previously sailed as Costa Luminosa with Carnival Corporation's Costa Cruises brand. It underwent an extensive refit in the run up to its debut with a new name and livery.

Constructed at Italy's Fincantieri shipyard in 2009, and sailing for Costa Cruises for 13 years, the ship underwent an extensive dry-dock to bring it in line with Carnival's Spirit-class vessels -- Carnival Miracle, Carnival Legend, Carnival Pride and Carnival Spirit. The refurbishment also included the addition of the signature red, white and blue hull livery that was first introduced on the cruise line's new flagship Mardi Gras  in 2021, and is now being rolled out to other ships in the fleet. The throwback funnel design that once adorned some of Carnival's earlier vessels has been retained.

The ship's spa has been transformed into the line's traditional Cloud 9 spa -- which will also offer a dedicated stateroom category -- and one of the pool decks has been reconfigured as Carnival's Serenity adult-only retreat.

Carnival Luminosa has 1,130 cabins and suites, which range in size from 150 square feet to 645 square feet. A total of 662 staterooms and 106 suites have balconies. Cloud 9 passengers can choose from inside, balcony cabins and suites which come with perks including unlimited use of thermal suites, priority spa reservations and discounts during port days and two complimentary fitness classes. Benefits for suite passengers include priority check-in and express boarding, guaranteed dining times and complimentary laundry.

Want to Be Onboard First? Carnival Luminosa's Maiden Voyage is in November 2022

Carnival Luminosa's inaugural sailing under its new name and brand will be a seven-night Australian itinerary, sailing round-trip from Brisbane, departing on November 6.

Carnival Luminosa Itineraries Will Focus on Australia and Alaska

Following the maiden cruise the vessel will sail on a series of three-, four- and seven-night sailings from Brisbane, and eight- to 11-night itineraries to New Zealand and the South Pacific. In May 2023 Carnival Luminosa will embark on a 22-night transpacific repositioning voyage before a four-month Alaska season of five-, six- and seven-night round-trip cruises from Seattle with ports of call including  Juneau, Ketchikan, Sitka, Skagway, Icy Strait Point, and the scenic cruising of Tracy Arm Fjord. Completing its season in Alaska, Carnival Luminosa will operate another transpacific voyage back to Brisbane, stopping in first-time-for-Carnival destinations, including Kushiro, Aomori, Tokyo, Hiroshima and Nagasaki in Japan, as well as Puerto Princesa, Philippines and Bitung, Indonesia.

Get Carnival Luminosa price drops
250,000+ people have entered their email