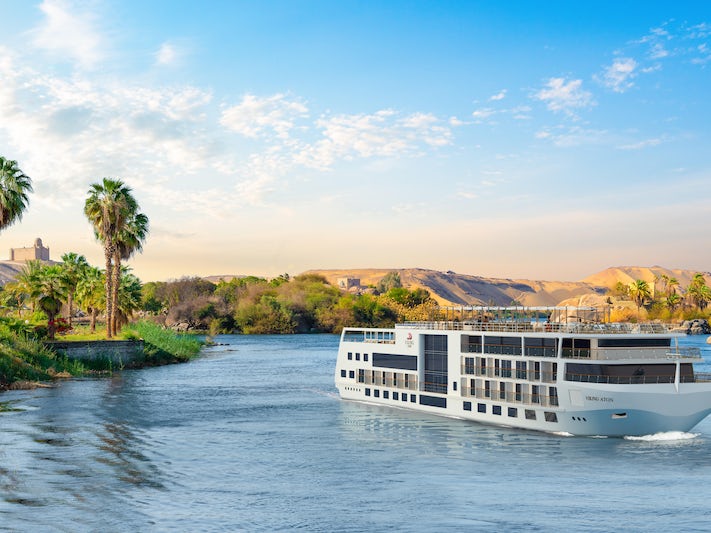 Slated to launch in August 2023, Viking Aton is Viking's second brand new ship on the Nile.  The 82-passenger vessel follows identical sister ship Viking Orisis, which debuted in August 2022 and two more sister ships -- Viking Hathor and Viking Sobek -- will be delivered in 2024 and 2025. The vessel designed specifically to sail on the Nile features trademark details from the line's European river vessels and ocean ships.

The ship's 41 staterooms, all river-facing, are located across three decks. Entry level cabins are the 12 standard cabins on the lower deck which measure 232 square feet and have fixed windows. The middle deck has 21 Veranda Staterooms, measuring 239 square feet and with a walkout balcony with a table and chairs.

On the upper deck are six 409-square-feet Veranda Suites and the pair of 525-square-feet Explorer Suites. These are all two-room suites with a separate bedroom and living area and have private balconies with room for a lounger, table and chairs. Extra perks that come with the suites include a welcome bottle of Champagne, mini-bar with wine, beer and soft drinks which is replenished daily, robe and slippers, and complimentary laundry and shoe shine service. Additionally, passengers in the Explorer Suites benefit from private transfer services, a drinks package and optional in-room breakfast service.

Public areas include a restaurant with floor-to-ceiling panoramic windows, lounge and bar, and sun deck with a small swimming pool and shaded areas. There is also a library and shop, elevator from the main deck to the pool deck and free Wi-Fi.

Viking Aton Has a Familiar Feel for Repeat Viking Passengers

Under construction at the Massara shipyard in Cairo, the vessel was inspired by Viking's river and ocean ships. It will feature the elegant Scandinavian design for which Viking is known, rather than some of the more elaborate decor found on some Nile riverboats. Several aspects familiar to repeat Viking passengers are the indoor and outdoor Aquavit Terrace for panoramic viewing and dining, and the distinctive square bow. Shore tours also feature Viking's 'privileged access' excursions to the tomb of Nefertari in the Valley of the Queens and the tomb of Tutankhamun in the Valley of the Kings.

When is Viking Aton's Launch Date?

Viking Aton will enter service in August 2023 and the exact timing of the inaugural voyage will be announced at a later date.

The ship will sail on the 11-night Pharaohs & Pyramids round-trip Cairo itinerary which combines four nights in the Egyptian capital and flights to and from Luxor for a seven-night sailing on the Nile. There is also the option for passengers to book a four-night pre-cruise extension in the U.K. which provides an introduction to Egyptian antiquities. This includes retracing the steps of Howard Carter and the 5th Earl of Carnarvon, who discovered the tomb of Tutankhamen with an exclusive morning tour of the Egyptian Collection at the British Museum, as well as visits including Oxford University's Griffith Institute, which houses Carter's archives, and Highclere Castle to see the earl's private collection of Egyptian artefacts.

The ship measures 236 feet and carries 82 passengers at full occupancy with 65 crew.