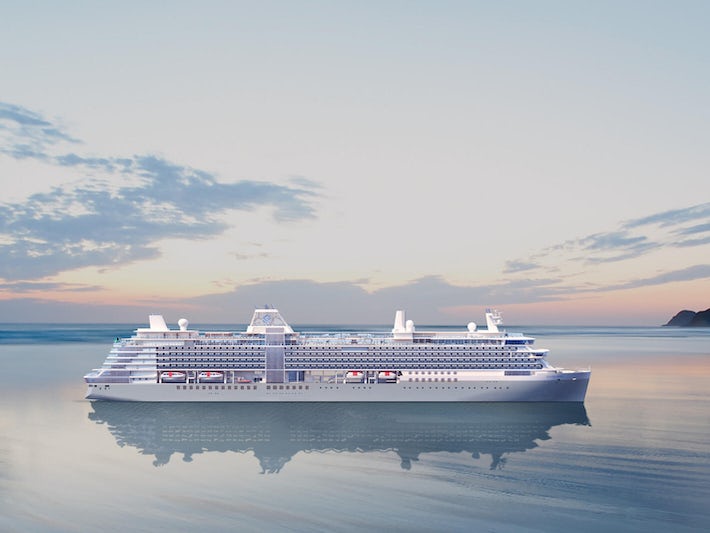 Slated to launch in summer 2024, Silver Ray will be Silversea's second Nova Class ship.  The 728-passenger vessel will follow in the wake of sister ship Silver Nova, launching in summer 2023, and feature the same eco-friendly features and an all-new "horizontal" design that will be this class' signature, plus all-balcony cabins with butler service.

Along with sister ship Silver Nova, Silver Ray will offer a space-to-guest ratio of 75 GRT (gross register tonnage) per passenger which is the highest in the Silversea fleet, and a 1:1.3 crew-to-guest ratio. To enhance the sense of space and openness, the ship utilizes large areas of glass, including sea-facing elevators with glass walls and a pool located on the side of the ship -- rather than in the middle -- to create an area with unobstructed views.

Until the Nova Class vessels were announced, all Silversea ships were built with cabins situated at the front of the ship -- and farthest away from the engine room -- and public areas at the back. New technology has resolved any issues of engine room noise and Silver Ray is being constructed to a "horizontal" plan with staterooms across the length of the ship; which is the norm with most modern ship design and was a first for Silversea with Silver Nova.

Cabins, located across four decks, come in 13 categories and start at 357 square feet. They all have verandas and walk-in closets. The largest staterooms are the pair of Otium Suites, which are located aft on Deck 6 and 7. Providing a 270 degree view, these suites have a bedroom and separate living and dining area and measure 1,324 square feet, and include a 431-square-foot veranda with a whirlpool.

Silver Ray has eight dining options including the line's signature S.A.L.T. Kitchen with destination-inspired menus such as Terrain, which offers recipes and flavors specific to the port visited. Other restaurants include the casual dining Grill, Spaccanapoli pizzeria, Kaiseki for Asian-fusion dishes and French fine dining restaurant La Dame.

The bars and lounges include the open-air Dusk Bar situated on Deck 10 at the back of the ship and the ideal spot for a sundowner. Silver Ray also has the popular Arts Cafe serving drinks and snacks in a cultural setting.

When Silversea announced plans for Silva Nova, the line said it would be the first hybrid, luxury cruise ship to be totally emission-free in port by using fuel cells and batteries. Silver Ray, which is also being constructed at Germany's Meyer Werft shipyard, will feature the same sustainable technology that uses shore-side power when the vessel is docked.

Silver Ray will also use eco-friendly liquefied natural gas (LNG) as its main fuel. Silversea says the hybrid technology not only helps in port, but will also allow Silver Ray to achieve a percent overall reduction in its greenhouse gas emissions per double suite when compared to its previous Muse Class ships.

Other features include a micro auto gasification system, which reduces onboard waste volume, resulting in lower incineration emissions. Additionally, Silver Ray is projected to achieve an Energy Efficiency Design Index (EEDI) rating of approximately 25 percent better than the current requirements set out by International Maritime Organization (IMO). It also has a hydrodynamic hull design to reduce fuel consumption.

Want to Be Onboard First? Silver Ray's Maiden Voyage is in July 2024

Silver Ray's first sailing is a 10-night itinerary from Athens (Piraeus) to Venice departing on July 19, 2024.  The voyage along the coastline of Greece, Montenegro, Croatia and Italy will include calls in Santorini, Corfu, Kotor, Bari, Dubrovnik, Split, Hvar, Zadar and Trieste.

Silver Ray Itineraries Will Focus on the Mediterranean

Silver Ray will spend the rest of the inaugural season in the Mediterranean on a variety of 6- to 11-night voyages. In December 2024 the ship will reposition across the Atlantic to Fort Lauderdale and spend the spring 2025 season in South America sailing on 8- to 19-night cruises out of Fort Lauderdale, Lima (Callao), Buenos Aires and Rio de Janeiro.

Get Silver Ray price drops
250,000+ people have entered their email