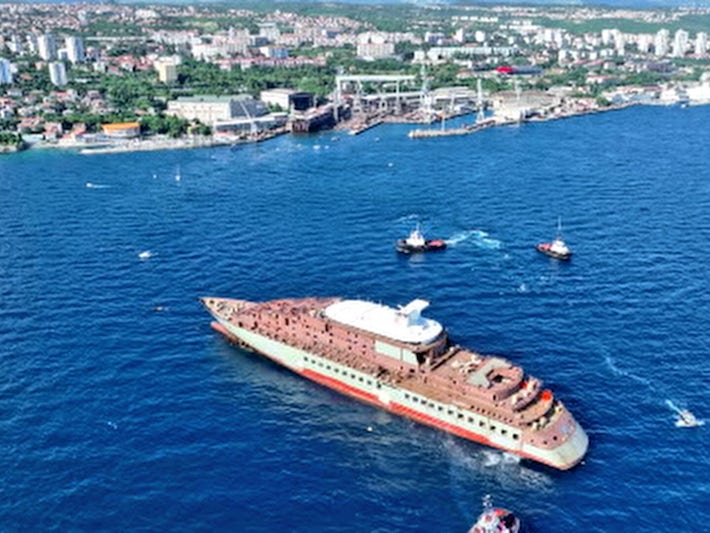 Launching in spring 2023, Scenic Eclipse II is the second luxury "discovery ship" for the Australian company Scenic. Carrying up to 228 passengers, it is the sister vessel to Scenic Eclipse which marked Scenic's first foray into ocean cruising.

The sleek ship has been designed with upscale features -- including two helicopters and a submarine -- alongside technological enhancements such as an ice-strengthened hull to enable it to navigate all seas, including the polar waters of Antarctica and the Arctic.

The boutique-style vessel with eight passenger decks is being constructed at Croatia’s 3. Maj Shipyard, with the build overseen by MKM Yachts which is a division of the Scenic Group. Following passenger and crew feedback from Scenic Eclipse, the second ocean vessel will showcase some new features. In addition to upgrades in the Senses Spa, Scenic Eclipse II will have a newly designed outdoor pool and Panorama Bar on its top deck and will be equipped with a next generation custom-made eight-passenger submarine, Scenic Neptune II, that can dive down to a depth of up to 660 feet.

Scenic Eclipse II has 114 spacious outside facing cabins, some with balconies, across seven categories and located over five decks. All come with butler service. They start at 345 square feet -- very large for an entry-level cabin -- and include 560-square-foot Spa Suites with whirlpools and a complimentary spa treatment.

The largest staterooms are the pair of Owner's Suites located forward on Deck 9. These suites measure 1,453 square feet, with a separate bathroom and living area with a dining table for up to eight. The balconies are 646 square feet. One of the suites can be combined with the neighbouring Spa Suite to create a 2,660-square-foot two-bedroom suite.

Dining options are extensive for a ship of its size. There are eight restaurants and all are included in the fare, aside from the invitation only Chef's Table for passengers staying in the top suites. In addition to the main dining room, options include the casual Yacht Club buffet, a French fine dining restaurant, steakhouse and pan Asian restaurant. There is also 24-hour room service.

As with its sister vessel, standout features are the ship's "toys"; most notably two six-passenger helicopters and an eight-passenger submarine (carrying two more passengers than the sub on Scenic Eclipse) that come at an additional charge. The ship has 12 Zodiacs for shore landings and tours and there is a marina platform for activities including kayaking, snorkeling and diving.

The hull has the highest passenger ship ice-class classification (1A-Super) allowing the vessel to operate on polar cruises for up to three months a year. On these sailings, passenger capacity is capped at 200 to allow several Zodiac landings each day. The ship is equipped with computer-controlled GPS Dynamic Positioning which allows it to maintain its position using propellers and thrusters without dropping anchor on sensitive sea beds. It is also equipped with oversized stablilizers for smooth sailing.

Want to Be Onboard First? Scenic Eclipse II's Maiden Voyage is in April 2023

In 2024, Scenic Eclipse II will visit Polynesia, Indonesia and Australia.