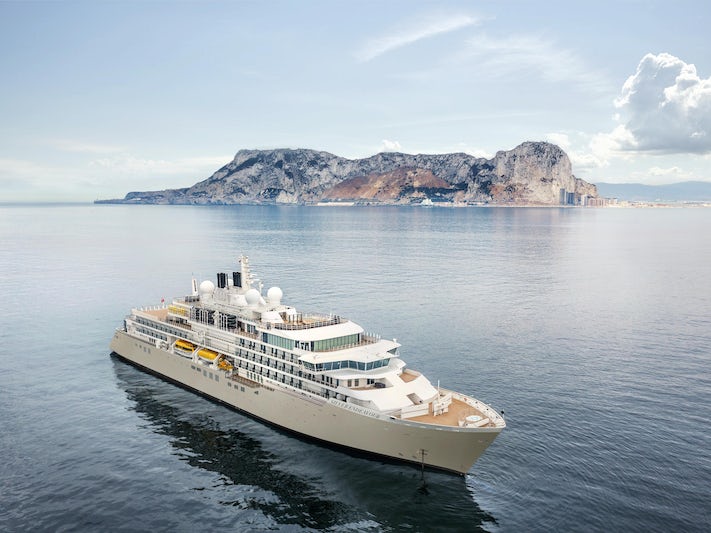 After being bought by Silversea, the former Crystal Cruises' expedition vessel Crystal Endeavor relaunches in November 2022 as Silversea Endeavour.

Following the collapse of the luxury Crystal brand in early 2022 -- following the bankruptcy of parent company Genting Group -- Silversea acquired the 200-passenger vessel that was first launched in summer 2021. The ship is decked out with all of the best in expedition amenities, including two helicopters and a six-passenger submarine.

Silver Endeavour will become the fifth expedition ship in Silversea's 11-strong fleet and replace the 144-passenger Silver Explorer for the upcoming Antarctica season.  The vessel was named after British explorer Captain James Cooks' research ship HMS Endeavour, and Silversea has returned to the original spelling.

Designed for ultra-luxury expedition cruising, Silver Endeavour carries just 200 passengers on a vessel with eight passenger decks. There are no inside cabins and all suites have balconies and feature a useful closet for storing expedition gear.

Living space in the entry staterooms, called Deluxe Suites, comes in at a generous 304 square feet. Although one room rather than two, there is a curtain between the bed and living area to provide privacy. The biggest suites are the pair of two-bedroom 1,290-square-foot Owner's Suites, which have very big balconies, a hot tub for two and offer fantastic views from the front of the ship. They can be connected to adjoining Penthouse Suites to create accommodations with indoor footage of 2,227 square feet and a veranda of 1,654 square feet.

Public areas are also spacious and extensive, and include a lounge with 270-degree panoramic views for wildlife spotting, along with forward and aft observation decks. Other amenities include a theater large enough to accommodate all passengers, lecture rooms, casino with private gaming area, spa with a yoga studio and wellness center, pool, hot tubs, shops, a jogging track and marina platform with equipment that includes underwater scooters.

When it’s time to dine, there is a big emphasis on variety and the six options range from the main dining room through specialty restaurants, an informal bistro and grab-and-go spot.

Silver Endeavour Will Offer High Levels of Luxury and Technology

Moving to the Silversea brand as an almost new ship, Silver Endeavour will maintain Silveresea's high levels of luxury with a crew-to-guest ratio of approximately 1:1 and butler service to every suite. When the ship was ordered by Crystal Cruises, and constructed at the Lloyd Werft shipyard in Germany, it was billed as the first purpose-built polar class mega-yacht.

Designed to explore both polar regions, and travel to remote and hard-to-access destinations, Silversea says Silver Endeavour will offer the highest Zodiac-to-guest ratio in expedition cruising. The vessel is equipped with some of the latest exploration technology, including a remote Shotover gimbal camera system and a robotic Remote Operated Vehicle. The camera can capture high-quality images of wildlife from a distance of three miles and these are streamed directly to TVs on the ship, including the large screens in the Expedition Lounge. Similarly, the remote vehicle can explore depths of nearly 2,000 feet to take underwater images.

Want to Be Onboard First? Silver Endeavour’s Maiden Voyage is in November 2022

Silver Endeavour's inaugural sailing under its new name and brand will be a four-night Antarctica itinerary, sailing round-trip from King George Island, departing on November 28.

Silver Endeavour is replacing Silver Explorer for the 2022/23 Antarctica season. Following the inaugural cruise the vessel will sail on a series of four-, five- and eight-night round-trip King George Island voyages before embarking on a 19-night Antarctic expedition voyage round-trip from Puerto Williams, Chile, in February 2023. The program features Silversea’s Antarctica Bridge sailings with door-to-door travel and business class flights from South America to Antarctica to avoid the rough Drake Passage crossing.