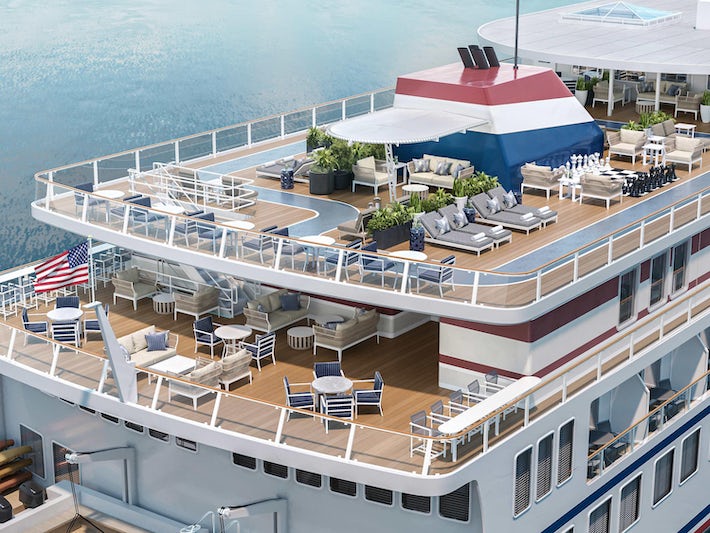 Sailing on the East Coast, the 109-passenger ship has been designed to offer "close-to-home" adventures that combine the atmosphere of an expedition cruise with the stability of a river cruising. It is the sister vessel of American Eagle, due to launch in summer 2023.

American Cruise Lines is continuing its partnership with leading Miami-based design company Studio DADO to create the interiors of American Glory. The ship's vibe will combine a modern and sophisticated feel with interiors promoting a sense of pride and appreciation for U.S. history and heritage. The decor, furnishings and art work will reflect the culture of the New England, Chesapeake Bay, and the Southeast where American Glory will sail.

American Glory has 56 cabins outside facing cabins, the majority with balconies, spanning six categories and located over four decks. They start at 230 square feet, for lower deck cabins with fixed windows and single cabins with balconies. The largest staterooms are the pair of Grand Suites on Deck 4 which are 550 square feet and have a separate bedroom and living room and private dining on the balcony.

A stand out facility is the adventure and swim deck, equipped with kayaks and a tender to offer a different perspective of the waterways being visited.

There is a main dining room and cafe and, notably for a small ship, the option for room service. The hub of the vessel is the panoramic forward lounge on Deck 2, and there is also a smaller lounge next to the cafe on Deck 3. Other amenities include a gym, games room and laundry.

American Glory Is Part of The Line's Plans to Double Capacity for U.S. Coastal Cruises

American Cruise Lines has been introducing 100% U.S.-built, crewed, and registered ships for over 30 years and American Glory is the second of the line's 12 identical Project Blue Eagle-class vessels that will more than double the nation's current capacity for domestic coastal cruises. The line said it reinforces the growing interest in small ship experiences.

The new fleet has been designed to sail in all types of water; small enough for New England harbors, stable enough for the Alaska Inside Passage and with a draft shallow enough for the Atlantic Intracoastal Waterway. American Glory will sail on the East Coast and the rest of the fleet will be deployed across the U.S. All of the ships are being constructed by the line's sister shipyard, Chesapeake Shipbuilding in Maryland.

Want to Be Onboard First? American Glory's Maiden Voyage is in July 2023

American Glory Itineraries Will Focus on the U.S. East Coast

Following the maiden cruise, American Glory will spend the rest of the season sailing on the seven-night Historic South & Golden Isles itinerary between Charleston and Jacksonville and the 14-night East Coast Inland Passage cruise from Baltimore.

In 2024 it will offer the seven-night Cape Codder itinerary, round-trip from Boston.

The ship measures 241feet and carries 109 passengers at full occupancy with 50 crew.