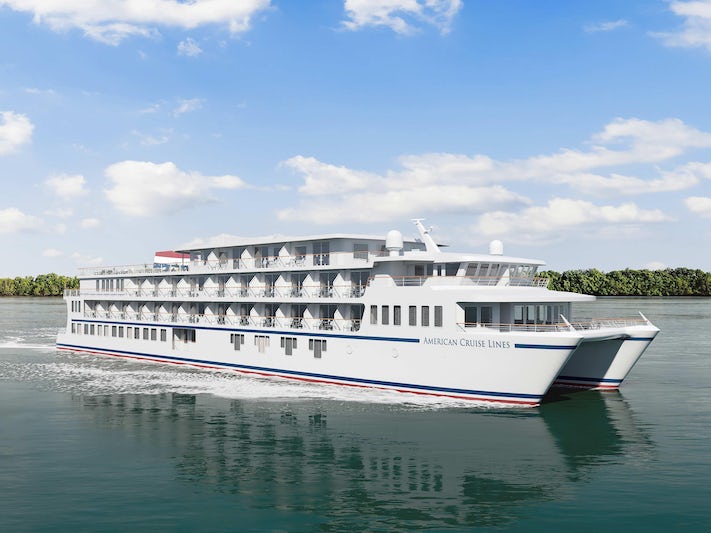 Slated to launch in summer 2023, the 109-passenger American Eagle is being billed by American Cruise Lines as "game changer" for U.S. coastal itineraries. The ship will be the first of the line's 12-strong all-new Project Blue Eagle-class fleet that features a hybrid catamaran design.

The ship will feature 56 outside cabins in six categories spread over four decks. Cabins start at 230 square feet, and these are situated on the lower deck and have fixed windows. Staterooms on all the other decks have private balconies. The largest accommodations are on the uppermost deck and comprise four 425-square-foot Sky Suites and a pair of Grand Suites that measure 550 square feet and feature a separate bedroom and living area and private dining area on the balcony. There are also three 230-square-foot single cabins, all with walk-out verandas.

American Cruise Lines engaged Studio DADO, the Miami-based firm responsible for the interior designs of its newest modern riverboats, to create the interiors on American Eagle. Furnishings, and art work reflect the culture of the New England, Chesapeake Bay, and the Southeast where the ship will sail.

The ship has an adventure and swim deck, located at the stern, equipped with kayaks and a tender for water-based exploration.

In addition to the main dining room, American Eagle will have a cafe and offer room service, which is a rarity for small ships of this size. Public areas include a panoramic forward lounge, games room, fitness center, and an upper sky lounge. Other amenities include a self-service laundry.

Constructed by the company's shipyard, Chesapeake Shipbuilding in Maryland, which is also building the 11 other Project Blue vessels, American Eagle features a hybrid catamaran design. Electric power capabilities, combined with a shallow draft will allow it to sail on a combination of lakes, rivers, bays and the U.S. coastline. American Cruise Lines says the fleet will offer the best qualities of ocean expedition adventure cruising with the stability of river cruising and land never being out of sight.

Want to Be Onboard First? American Eagle's Maiden Voyage is in July 2023

American Eagle Itineraries Will Focus on the East Coast

After the maiden voyage, American Eagle will sail the seven-night Cape Codder round-Boston itinerary and seven-night Maine Coast and Harbors round-trip Portland itinerary for the remainder of the summer.

The ship measures 241feet and carries 109 passengers at full occupancy with 50 crew.