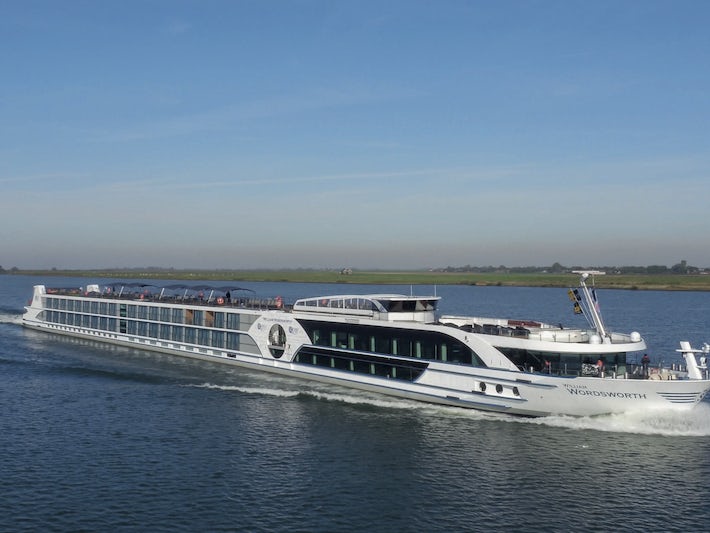 William Wordsworth is one of the newest vessels to join the river fleet operated by Riviera Travel, which is aimed at British travellers and the U.K.'s largest provider of European river cruises. It is part of an eight-strong fleet, all named after classic British authors and described by the line as "five-star". The ship was launched in 2018, carries 167 passengers and has facilities for solo travellers.

Riviera says the ship was deliberately designed to avoid the trend toward minimalist style. Instead, the vessel is fitted out with sustainable hardwoods, polished copper and brass fittings and wrought iron. The style is most notably showcased in the curved staircase leading to the marble-floored lobby, which is illuminated by natural light from the glass atrium above the reception, shore excursion desk and boutique. Elsewhere, the ship has an understated elegance and feeling of spaciousness.

Carrying fewer passengers than some ships of a similar size, the ship had designated space not used for additional cabins for onboard amenities, including a spa and wellness area with a gym, massage room, and nail and hair salon. The sun deck has a small splash pool and putting green.

Buffet breakfast, buffet lunch and a four-course dinner are served in the main restaurant, which can seat all passengers at one sitting on tables seating four or six. There is a small alternative restaurant, the Bistro, situated at the back of the ship on the upper Diamond Deck and includes indoor and outdoor seating. The Bistro has an open kitchen where chefs prepare a signature menu based on seasonal ingredients. This intimate dining experience can be reserved onboard at no extra charge.

On the same level is the Panorama Lounge and bar, which is the social hub of the ship and the place for nightly entertainment from the onboard musician. Other amenities include a self-serve complimentary tea and coffee station.

William Wordsworth's cabins are spread over three decks and lead in with the cabins on the lower Emerald Deck which measure 172 square feet and have fixed windows that do not open. The majority of staterooms on the middle Ruby Deck and upper Diamond Deck measure 183 square feet and have French balconies. These decks each have a pair of Superior Suites which are situated closest to the restaurant on the Ruby Deck and lobby on the Diamond Deck. They all measure 247 square feet and the additional space provides a living area, which is part of the main cabin.

Four 269-square-foot Deluxe Balcony Suites are located forward on the Diamond Deck. These staterooms have private walk-out balconies with a table and chairs, plus a much larger living area.  All suite guests receive benefit from Riviera Plus which includes upgraded L'Occitane toiletries, a bottle of chilled Prosecco and fresh fruits on arrival, complimentary evening aperitif and a smart handset with features that include maps, translator, currency converter, unlimited calls, text messages and Internet usage. Extra perks for passengers in the Deluxe Balcony Suites are robes and slippers.

On every cruise a number of staterooms on the lower Emerald deck are set aside for single occupancy at no additional cost. The ship also hosts dedicated solo river cruises on the Danube with no supplements across the entire ship, including suites.

William Wordsworth sails on a variety of cruises on the Danube, including Christmas and New Year itineraries.

The ship measures 443 feet and carries 167 passengers at full occupancy with 44 crew.