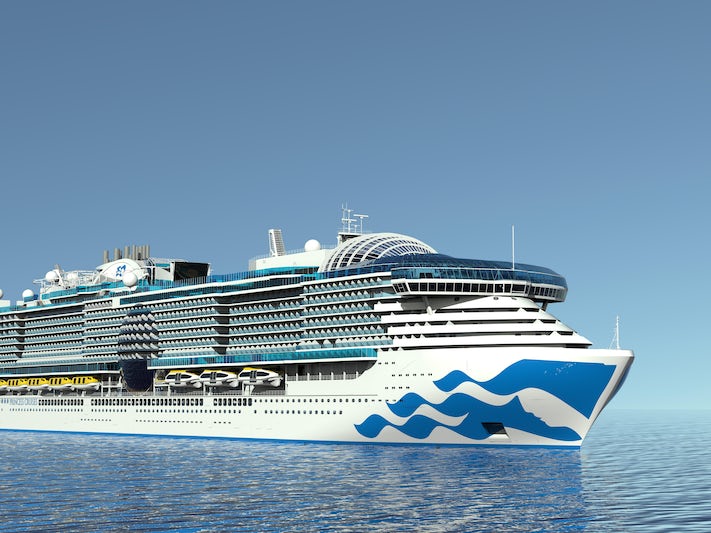 Princess Cruises is continuing the famous Sun Princess name with its next generation (and biggest-ever) cruise ship that will carry more than 4,000 passengers. The vessel, slated to launch in early 2024, will be the line's 16th ship, the largest ship in the Princess fleet, and will debut as the first of two all-new Sphere-class vessels.

New features debuting on Sun Princess include the Signature Collection, a new level of suite accommodation. In addition to premium stateroom amenities, passengers in these suites will have exclusive access to the Signature Restaurant, Signature Lounge and Signature Sun Deck, a private area of the adult-only retreat The Sanctuary.

Sun Princess will have a total of 2,157 cabins, including 50 suites and 100 connecting rooms, and have more outdoor balcony space than any other ships in the fleet. Of particular note, standard balcony staterooms will now offer in-room sofas -- a huge improvement over past designs that only offered a desk and chair for seating.

Among Sun Princess public areas, a standout feature is The Dome. Inspired by the terraces of the Greek island of Santorini, it is a multi-level deck covered with what Princess bills as the first-of-its-kind, true glass-enclosed dome ever constructed on a cruise ship. In the daytime the venue will be used as an indoor and outdoor pool area and at night the pool will be covered and turned into an entertainment space that will feature aerial performances.

The central European-style Piazza -- a feature on other Princess ships -- will span three decks and have seating areas with ocean views and a central LED screen for live entertainment. Next to the Piazza atrium area will be a new coffee shop, Coffee Currents, along with Bellini's Cocktail Bar and familiar Princess hangouts such as Crooners Bar and Alfredo's Pizzeria.

Sun Princess will also come equipped with the line's latest Ocean Medallion technology, a wearable device that enables passengers to order food and drink wherever they are on the vessel, book excursions and personalize their cruise experience.

Although further details about dining, entertainment and onboard features are still under wraps, when plans for the vessel were announced, Princess Cruises' President John Padgett said, "Sun Princess is a new and bespoke ship platform, designed to simultaneously embrace Princess heritage while boldly pressing into the future with iconic, elegant and pure lines unique to our brand."

The new Sun Princess is the third ship in the fleet to sail under the Sun Princess name, which began in 1974 with the ship that was used for the pilot episode of the U.S. TV series "The Love Boat", which was later filmed on other ships in the fleet. The second Sun Princess entered service in 1995, and at the time was one of the world's largest cruise ships carrying 2,000 passengers. It was sold by Princess in 2020.

Under construction at Italy's Fincantieri shipyard, the ship will incorporate the latest sustainable technology as part of the "green cruising" initiative drawn up by Carnival Corporation, Princess Cruises' parent company. It is one of 11 new ships in the corporate fleet powered by liquefied natural gas (LNG) which is currently the cleanest marine fuel.

A second Sphere class ship is also on order, scheduled to be delivered by Fincantieri in spring 2025.

Princess says Sun Princess will also be the first cruise ship built to meet the 2010 ADA (Americans with Disabilities Act) Standards for Accessible Design to enable all passengers to use the onboard facilities.

When Will Sun Princess Launch?

Sun Princess will enter service in 2024 and the maiden voyage will be a 10-night Grand Mediterranean itinerary departing on February 28, 2024. Sun Princess will sail in the Mediterranean during its inaugural 2024 spring/summer season and then reposition in the U.S. for a fall season of Western and Eastern Caribbean voyages out of Port Everglades (Fort Lauderdale), Florida.

Get Sun Princess price drops
250,000+ people have entered their email