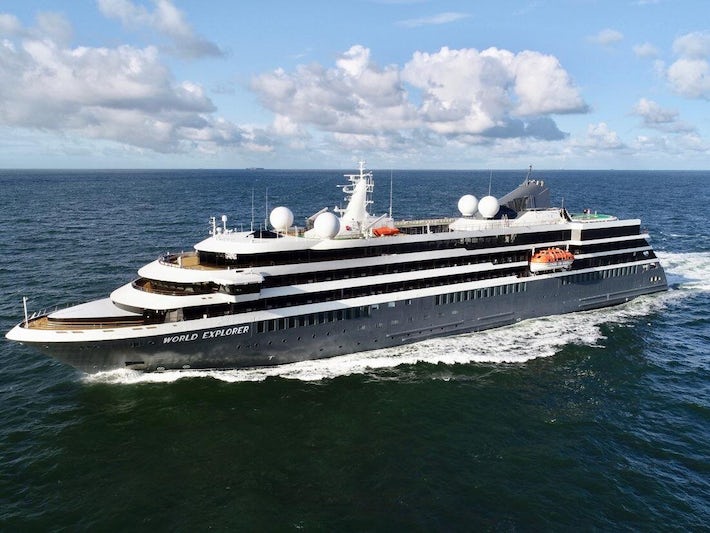 Following the debut of Atlas Ocean Voyages' first vessel, World Navigator, the upstart luxury small-ship line is preparing its second sleek newbuild for launch -- the 196-passenger World Traveller, which is scheduled to launch in November 2022.

Like its sister-ship, World Traveller is designed to sail to all corners of the globe. The ship is equipped with a GPS positioning system that allows it to maintain position without needing to drop anchor, a feature that will allow World Traveller to call on some of the world's most remote ports of call.

For the environmentalist, World Traveller has a secondary propulsion system that can silently propel the ship at up to 5 knots thanks to a series of hydro-jets. This silent propulsion allows the ship to operate in sensitive marine environments and affords better wildlife viewing, while a traditional propulsion set allows for smooth ocean cruising.

The ship is also ideal for scenic cruising, affording a generous amount of open-deck space for a ship of this size, along with a specialized bow viewing area known as The Water's Edge, complete with heated seating for cooler-weather itineraries.

Atlas Ocean Voyages bundles a number of inclusions into its cruise fares. Passengers can expect to have roundtrip economy-class airfare, beverages (including alcohol), yoga and Pilates classes, and at least one complimentary shore excursion with every cruise purchased. Fares also include prepaid gratuities.

That's in addition to the little niceties found throughout the vessel, including butler service for all suite passengers, gourmet cuisine options, and staterooms and suites equipped with L'Occitane toiletries.

World Traveller offers a number of culinary options for passengers onboard, including a main dining room situated at the stern on Deck 4 that will be a hub for breakfast, lunch and dinner.

A casual poolside grill on Deck 7 serves up on-deck favorites like burgers and salads.

Other culinary offerings will be revealed closer to the ship's launch date.

There are 10 different cabin grades aboard World Traveller, ranging from solo suites (the former Adventure-category rooms aboard World Navigator) to the top-of-the-line Navigator Suites.

The Solo category cabins are 183 square feet and come with a picture window. Located on Deck 3 midship, one of these cabins (304) is designated as an accessible room.

All cabins aboard World Traveller offer a queen-sized bed that converts into two singles; a bathroom with a walk-in shower that has body jets and a rainforest shower head; a wardrobe, interactive television system; and a small sitting area.

The vast majority of cabins aboard World Traveller are 270-square foot Veranda rooms. These add a private balcony with teak furnishings in addition to more living space. A larger version of this, Veranda Deluxe cabins come in at 300 square feet with a generous 52-square foot balcony.

Horizon-category cabins are also 270 square feet, but offer a "Juliette"-style balcony in place of a full step-out balcony. These Horizon rooms offer a drop-down window system similar to that found on many modern river cruise vessels and Celebrity Edge and Celebrity Apex. As with the Veranda rooms, a larger version of this Horizon cabin -- Horizon Deluxe -- pushes the square footage to 300.

Rounding out the upper-edge of the accommodation scale are 382-square foot Journey Suites that offer one bedroom, 105-square-foot balconies and are the first grade of cabins to offer butler service.

At the top end are World Traveller's Navigator Suites: 465-square-foot accommodations that can sleep up to three passengers and offer separated living and sleeping areas, plus a spacious balcony. Equipped with butler service, these rooms can be found on decks 5 and 6.

Unlike World Navigator, World Traveller will also have a self-serve passenger laundry facility on Deck 4.

Out on deck, passengers will find World Traveller's jogging track high atop Deck 8, wrapping around the vessel's radar mast and funnel. The rest of the deck is taken up by the ship's helipad, aft.

One deck below, on Deck 7, passengers will find the ship's forward-facing observation lounge. Known as The Dome, this is a social hub onboard World Traveller, particularly during moments of scenic cruising and when arriving and departing ports of call.

The last half of Deck 7 is set aside for Zodiac stowage.

As with many other small luxury vessels, entertainment onboard revolves largely around socializing over nightcaps or discussing the day's events at cocktail hour. Live piano music is offered in The Dome observation lounge, and rotated feature performers are often brought onboard, depending on itinerary and ports of call.

World Traveller debuts July 15, 2022, on a nine-night voyage from Lisbon to Palma de Mallorca. The ship then sails a variety of itineraries in the Western Mediterranean and Greece before setting out on a Transatlantic crossing for South America on October 11, 2022, with a journey from Tenerife to Rio de Janeiro.