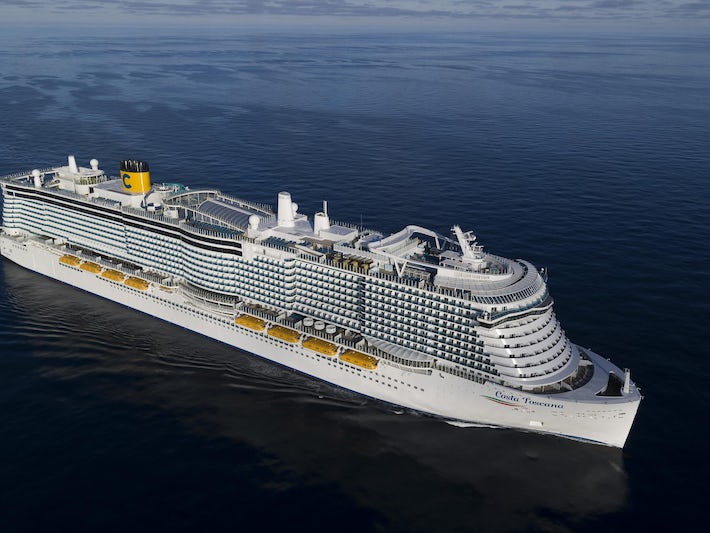 When Costa Toscana joined Costa Cruises in March 2022, it became the fourth ship in the 11-strong Italian Costa Group fleet to be powered by liquefied natural gas (LNG). The line's new flagship can carry more than 6,500 passengers and has been inspired by the company's homeland, including art, culture and landscapes.

There is no doubting the heritage of Costa Toscana -- or Tuscany -- as the public areas and 2,633 cabins have been influenced by the Italian region, which gives its name not only to the ship, but also its decks and main public areas. Furnishing, lighting, fabrics and accessories throughout the vessel were all made in Italy.

At the heart of the Costa Toscana is the Colosseo, located in the center of the ship and spanning five decks. Standout features include large screens, on the walls and on the overhead dome, to create visuals linked to different ports of call. Also notable is the Piazza del Campo with its grand staircase and open-air balcony on the top deck at the back of the ship which has a crystal floor to create the experience of "flying" over the water.

The Italian love of food is reflected in 21 restaurants and dining outlets to suit all ages and tastes. They include the Squok Restaurant, dedicated to families with children, and the LAB Restaurant where passengers can hone their culinary skills under the guidance of Costa chefs. The specialty Archipelago Restaurant offers three different five-course menus to choose from which have been created by a trio of international chefs; Bruno Barbieri from Italy, Helene Darroze from France and Angel Leon from Spain.

Sushi at Costa is dedicated to Japanese cuisine while chefs show off their culinary and theatrical skills at the Teppanyaki live cooking restaurant. There is also an Italian pizzeria and a gelateria with organic ice cream that's freshly made each day. Al fresco street food-style options include the Hawaiian inspired Kiki Poke, Green Healthy Food and the Salty Beach outlet.

Entertainment on Costa Toscana includes theater shows, live music and discos. The Solemio Spa has a sauna, snow cave and whirlpool and there is also a gym with sea views. The ship has four pools including the central La Spiaggia Beach Club, with terraces and hot tubs overlooking the pool area, and the quieter Versilia Pool with cabanas, which is situated at the bow.

Younger passengers can head to the Splash Aqua Park, with water slides of varying heights, and there is the Squok Club for children aged three to 11.

Constructed at the Meyer Turku Oy shipyard in Finland, Costa Toscana is described by the line as a floating "smart city", with sustainable features designed to reduce its environmental impact. The Costa Group -- which includes the Costa Cruises and AIDA Cruises brands and is part of the Carnival Corporation -- was the first in the world to pioneer LNG on cruise ships. Costa Toscana follows LNG-powered ships AIDAnova, Costa Smeralda and AIDACosma.

Additionally, the ship's entire daily water requirement is met by treating seawater using desalination plants, and energy consumption is minimized through intelligent energy efficiency technology. A 100% separate waste collection system involves the recycling of materials such as plastic, paper, glass and aluminum which is carried out on board as part of a circular economy model.

The driftwood used to furnish the Archipelago restaurant has been collected through the Guardians of the Coast, an environmental education program for the protection of the Italian coastline promoted by the Costa Crociere Foundation.  For every dinner served at the for-fee restaurant Costa Cruises will donate part of the proceeds to the Costa Cruises Foundation to support environmental and social projects.

Following its debut in March 2022, Costa Toscana is spending an inaugural season in the Western Mediterranean. Throughout the summer the ship will call at Savona, Rome (Civitavecchia), Naples, Ibiza, Valencia and Marseille. In the fall, Palma de Mallorca will replace Ibiza.

Get Costa Toscana price drops
250,000+ people have entered their email

Find a Costa Toscana Cruise from $449