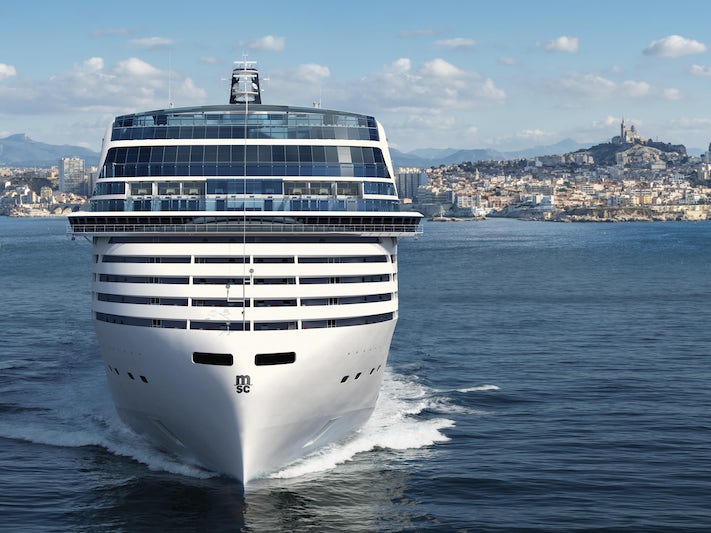 The ship features seven pools, 33 restaurants, bars and lounges, including several new venues, while the kids' club and MSC Yacht Club are the largest in the fleet.

Built in Saint-Nazaire, France, the 6,774-passenger ship (at full occupancy) is more than 1,000 yards in length; has 430,000 square feet of public space, becoming the longest, tallest and biggest in the fleet -- and one of the largest cruise ships at sea.

One of the first things passengers will notice about MSC World Europa is its striking design from the exterior. As well as the Y-shaped aft, the bow takes a futuristic bulbous shape, contributing to the ship’s efficiency in the water.

In addition to being LNG-powered, a source of electricity and heat onboard, the ship also taps into shore-to-ship power where possible and employs enhanced recycling and waste management systems.

Passengers will notice waste bins in cabins have been separated into paper, plastic and food compartments, with the ship also recycling water, glass and aluminium.

We loved the buzzy new 113-yard World Promenade on Deck 8 and the impromptu Carnival-style performances that pop up here. Reminiscent of Royal Caribbean's Boardwalk, the half-open space is centered on the 11-deck dry slide -- the largest of its kind at sea -- called Venom Drop @ The Spiral.
This coiling dry slide in the middle of the deck is spectacular, though we half expected to see a fanciful merry-go-round, too.

Also on Deck 8, World Galleria is a beautiful space filled with drinking, dining and entertainment venues, with the LED-sky screen featured above similar in design to those on the Meraviglia class of ships.

Deck 8 is bookended by the ship’s two main show spaces, the all-new Panorama Lounge for music and dance shows, and the World Theatre, where five new shows will be on the program (Eko, Amelia, A Night on Broadway, Cadmo The Landwalke and Yellow Submarine).

If you're traveling with children, don't expect to see much of them onboard. The ship's Deck 19 kids club, Doremiland, is the largest in the fleet, while the 300-seat Luna Park Arena (Deck 6 & 7) also offers kids' activities and movie showings.

Chef's Garden Kitchen (Deck 8), replacing L’Atelier Bistrot, features an open kitchen and a glass-encased floor-to-ceiling growing space where micro herbs and other greens are grown onboard.

La Pescaderia (Deck 8) has a focus on Greek and other Mediterranean dishes with an outdoor seating area for alfresco dining on the World Promenade.

Masters of the Sea Pub is split across two decks and three craft brews on board in special copper vats installed as a showpiece in the bar.

Another new concept is Elixir -- Mixology Bar with elaborate signature cocktails, a South Asian-style tea room filled with perfumes from the East, an authentic Emporium coffee bar with selections from around the world, a widely stocked Gin Project inspired by a real distillery, a zesty juice bar made from fresh ingredients and a gelateria.

Among the new venues on this super-size ship is the Raj Polo Tea House (Deck 8), which reminds us of a lounge you might find at the Raffles Singapore or a luxurious Four Seasons hotel.

There's no sign of bling or sparkles here; simply muted colors, plush furnishings and a relaxed vibe where soothing cups of chai and afternoon tea are served.

Follow the passage to the left of the venue to see a gallery of teas, tea traditions, a map showing where the teas are produced and artifacts relating to this much-loved drink.

There’s another secret passage onboard MSC World Europa, though we won’t spoil the fun by revealing its whereabouts.

MSC World Europa will have 19 different cabin categories -- 65 percent of those with balconies. The ship will see the introduction of seven new cabin types. These include:

• Balcony suites and cabins overlook the World Promenade. If you’re looking for a quiet cabin location, you may want to avoid these new Promenade-facing rooms, which can pick up noise from bars and lounges above and below. If you prefer to be in the thick of the action, this cabin type will suit you.
• Duplex MSC Yacht Club suites with large balconies and private hot tub, as well as open living/dining room area.

• Infinite Ocean view cabins with a panoramic sliding window that turns into a glass balustrade when open.

We didn’t get to see these lavish new Owners Suites during a brief visit ahead of the FIFA World Cup Qatar, but passengers can expect walk-in wardrobes, large bathtubs, separate bedrooms and living areas, and whirlpools on balconies.