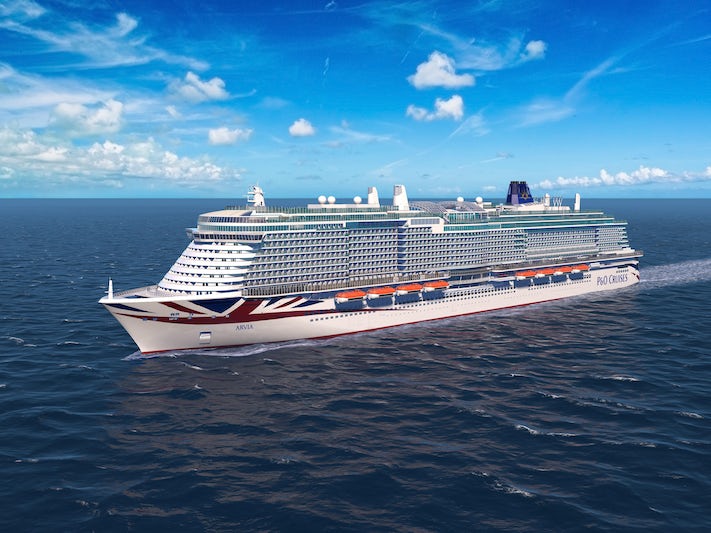 Arvia is P&O Cruises' second Excel-class ship, the sister ship to Iona, which will launch in Southampton on December 23, 2022.

The 5,200-passenger ship will see several new-to-the-line features debut for P&O Cruises, including a Take That musical, the first rum distillery at sea, the line's first escape room -- and for the kids an exclusive link up with Aardman, the inventors of Wallace & Gromit.

Arvia will also have many of those venues made popular on other ships in the fleet such as the Glass House, Epicurean, Brodie's pub and Sindhu.

What is Arvia Cruise Ship's Capacity?

Arvia will have the capacity for 5,200 passengers across 2,614 cabins and is structurally identical to Iona, though Arvia will offer plenty of new features and venues.

Yes. Cruise Critic was given a sneak peek of the ship during an October 2022 shipyard tour at the Meyer Werft shipyard in Papenburg, Germany. Check them out here.

Arvia, meaning "from the seashore", will sail year-round in the sun, with the line promising views of the ocean and shore maximised from every location onboard. There's a swim-up bar, Infinity and Panorama Pool and Bar, and a dazzling Grand Atrium with ocean views.

Arvia will offer the same new-to-the-line features that debuted on Iona -- plus many new additions -- including the 970-sqm SkyDome with a pool and stage featuring aerial performances, movies on SeaScreen and theatre productions; The Keel & Cow and The Olive Grove restaurants and Conservatory Mini-suite accommodation.

Other entertainment includes aerial shows in the Grand Atrium and classic movies will be shown at the triple-height Ocean Studios.

Among the 20 dining venues and eight bars, are all of the line's favourites: Sindhu, Epicurean, The Glass House, The Limelight Club, and main dining rooms Meridian and Zenith. Among the bars are Sunset Bar, Brodie's pub, Anderson's Bar, Beachcomber Pool and Bar and The Crow's Nest. The Club House is Arvia's late-night party venue.

What New Features Are Being Introduced on Arvia?

Here’s a Breakdown of What's New In Daytime Fun & Entertainment

When is Arvia's Maiden Voyage?

Where Will Arvia Sail?

Following its first two sailings, both to the Canary Islands from Southampton, Arvia will move to the Caribbean to offer seven- and 14-night winter sun holidays from Bridgetown, Barbados.

Arvia will return to Southampton in March 2023 to offer Mediterranean no-fly cruises through the summer 2023 season.

Get Arvia price drops
250,000+ people have entered their email