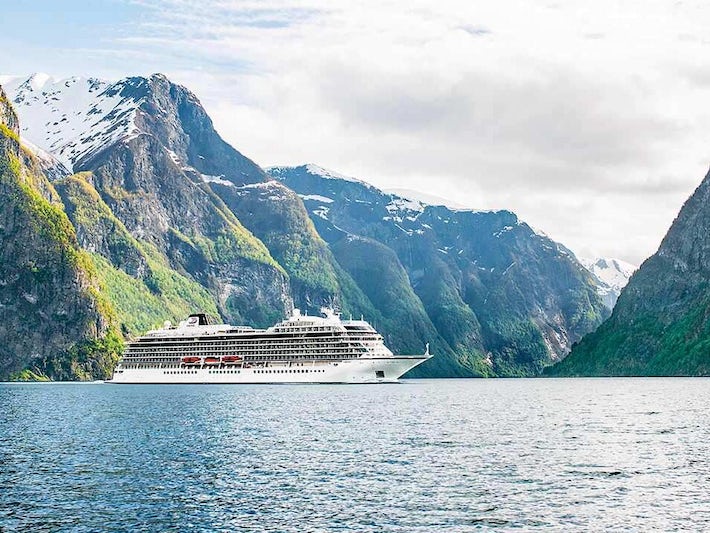 Set to launch in May 2022, Viking Mars will be the seventh ship in Viking’s near identical fleet of ocean vessels. The 930-passenger adult-only vessel will provide a familiar Scandi-cool feel for fans of Viking which describes itself as offering travelers "The Thinking Person's Cruise".

Viking Mars, like its fleetmates which have all been constructed at Italy's Fincantieri shipyard, will be noteworthy for what isn't onboard. Since launching its first ocean ship in 2015, Viking has made it a point of pride to not offer art galleries, onboard photographers, casinos, pool parties, razzle-dazzle entertainment and the traditional reception desk.

Instead, the ship will be made up of warm and cozy interior spaces designed for lingering, like the Living Room lobby; the forward-facing two-deck Explorers' Lounge, the iconic Aquavit Terrace that is a favorite on its river vessels and the warm, inviting Wintergarden, home to daily afternoon tea.

Books line the ship's public spaces from stem to stern in one of the most curated collections at sea. Puzzles adorn the Living Room atrium, and live music -- mostly classical -- is featured each evening in the Living Room, the Explorers' Lounge, and Torshavn. The clubby Blues and Jazz lounge tucked away amidships that comes to life after dark and is the closest you'll get to a nightclub on Viking.

As well as production shows, the multi-purpose theater is used for informative lectures and movies played through a cinema-quality sound system; another rarity among cruise ships. Movies under the stars are also offered up on the Pool Deck, where passengers make use of wireless headsets. Evening pre-and-post-dinner musical acts and roving performances in the ship's Living Room Atrium, Explorers' Lounge and the Torshavn keep things elegant and entertaining at night.

Viking Mars offers multiple dining options. The ship's main dining venue, The Restaurant, is open for breakfast, lunch and dinner. Every table offers good sightlines to the floor-to-ceiling windows, all of which can open to let in fresh air when conditions allow. Also noteworthy is the Pool Grill, which serves up excellent lunchtime salads and tasty cooked-to-order. Mamsen's, named after Viking founder Torstein Hagen's mother, features recipes from the family cookbook such as fluffy heart-shaped waffles, open sandwiches and pea soup.

Viking also tears up the rule book with its two speciality dining venues which are both free, although require reservations linked to your cabin grade. At The Chef's Table there is a rotating themed tasting menu with multiple small courses which can be paired with complimentary wines or premium pairings for a modest additional charge. Manfredi's is an Italian eatery reminiscent of Silversea's classic Italian dining venue, La Terrazza. The similarities are more than skin deep: Manfredi's is named for Silversea chairman Manfredi Lefebvre d'Ovidio, a close personal friend of Hagen.

The Kitchen Table is the ship's most exclusive option. The demonstration kitchen offers interactive for-fee cooking classes which are often paired with journeys ashore to collect ingredients from local markets.

Other public areas include the Scandinavian-styled  LivNordic Spa has a spacious thermal suite, with a hydrotherapy pool, heated tile loungers, and even a snow room to cool off after the heat of the sauna. Again, it is free of charge.

All Rooms On Viking Mars Have Balconies

The 465 cabins all have balconies and are uniformly well-appointed and decorated in tasteful, muted tones across all six categories. Viking bases its onboard amenities on cabin grade, so paying a bit more for a higher grade can allow passengers to board earlier, reserve shore excursions and dining options sooner, and add little niceties like complimentary mini-bars with either soft drinks or alcohol and soft drinks that are replenished either daily or per voyage.

The one Owner's Suite is an expansive multi-room suite that measures 1,448 square feet. As well as a private sauna and the first vapor-light fireplace at sea, it has a boardroom that seats up to 12 for dinner parties and a private library, wine and music collections curated by Hagen.

When is the Viking Mars Maiden Voyage?

Viking Mars sets sail May 28, 2022 on its maiden voyage, a 13-night "Trade Routes of the Middle Ages" itinerary from Barcelona to Bergen. Ports include Cartagena and Malaga in Spain; Porto in Portugal; Falmouth and Portsmouth in England; Le Havre (Paris) in France; Zeebrugge (Bruges) in Belgium and Amsterdam in the Netherlands.

After the maiden voyage, Viking Mars will spend its 2022 inaugural season sailing on Viking's Northern European itineraries, including the line's popular "Viking Homelands" itinerary from Stockholm to Bergen, as well as voyages to Iceland, the British Isles, the Baltic, and Western Europe. Viking Mars will then relocate before embarking on voyages in Asia and Australia

Get Viking Mars price drops
250,000+ people have entered their email