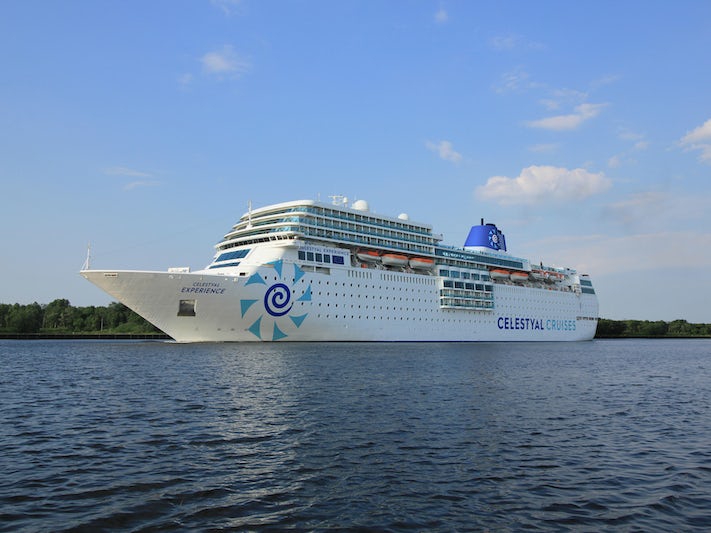 Greek cruise line Celestyal Cruises has increased its fleet to three -- and introduced a new flagship -- with the acquisition of the 1,800-passenger vessel Celestyal Experience.

Built in 1993 at the Fincantieri shipyard in Italy for Costa Crociere (later bought by the Carnival Corporation), the ship previously sailed under the names Costa Romantica and Costa neoRomantica. It was extensively refurbished in 2011, including the addition of two new half decks and more than 100 cabins, which increased its tonnage from 53,049 to 56,769 tons. The ship will set sail under its new name and ownership in March 2021 and showcase new wellness staterooms, a beach club and Mediterranean cuisine.

It is the largest ship in Celestyal's fleet, joining mid-size ships Celestyal Crystal and Celestyal Olympia which accommodate up to 1,500 passengers. Celestyal Experience has 789 cabins --166 with balconies -- located on eight of the 10 passenger decks.

The cabins range in size from single and inside cabins measuring 150 square feet to six Grand Suites, sleeping up to four. These suites measure 500 square feet and have verandas measuring 150 square feet. A first for Celestyal is the introduction of four all-new Wellness Spa stateroom categories, all with balconies, situated on Deck 14, the uppermost passenger deck and reserved solely for the use of passengers staying in these suites. Perks include free and unlimited admission to the spa area and priority access to speciality restaurants and the new island-inspired Beach Club.

The club is an adults-only outdoor area, also available to passengers staying in other suite categories, and features cabanas, premium sunbeds and a hot tub overlooking the stern of the ship.

Celestyal Experience has a total of 166 suites, a higher number than its two other ships. Passengers booking the 34 suites in the top categories will benefit from a concierge service with priority check-in and embarkation, express luggage delivery, unpacking and an exclusive dining area.

Standard amenities in all cabins, which can be configured as twins or doubles, include a bathroom with shower, seating area, dressing table/desk, TV entertainment system and fridge. There are accessible cabins and staterooms with Pullman beds for a third or fourth passenger.

Celestyal Experience has four restaurants, including a casual dining Greek grill and deli, and they feature the line's trademark Mediterranean cuisine ranging from pizzas prepared in a wood-burning oven to fine dining paired with local wines and menus using local olive oils, cheese and other regional specialities.

There are lifts to all passenger decks and smoking is allowed in designated outdoor areas. Room service, laundry and Wi-Fi are available at extra charge.

Celestyal Cruises specialises in cruises to the islands of Greece and the Eastern Mediterranean. Celestyal Experience's inaugural sailing, departing on March 6, 2021, will be the seven-night "Greek Continents" cruise calling at Athens and Rhodes (Greece), Kusadasi (Turkey), Ashdod (Israel), Port Said (Egypt) and Limassol (Cyprus). Later in the season the ship will sail on the week-long "Idyllic Aegean" and "Eclectic Aegean" itineraries. The latter will feature the new embarkation port of Thessaloniki in addition to an overnight stay in Istanbul.