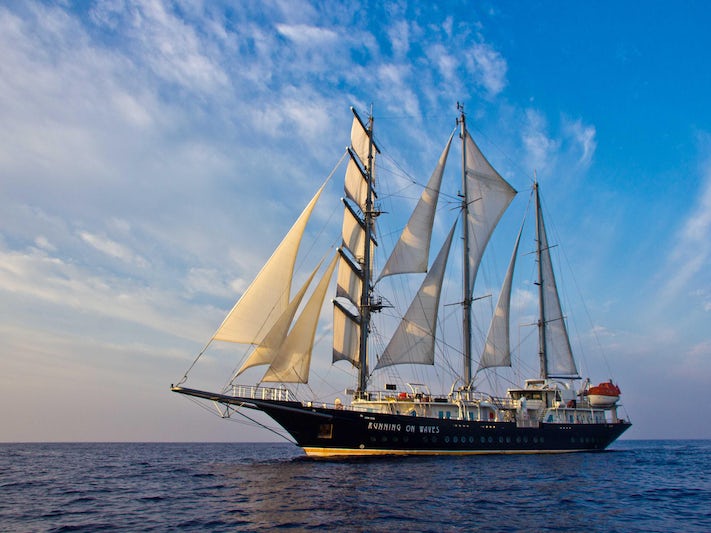 Recreating the golden age of sail, Running on Waves is built in the style of a classic clipper ship and primarily sails on Greek itineraries in the Mediterranean, Aegean and Ionian.

The result of a five-year construction project involving shipyards in Russia, Poland and Germany, the vessel was launched in 2011 and refitted in 2013. Running on Waves is a three-masted barquentine -- denoting the type of rigging used on the ship -- with all the facilities of a modern sailing vessel. With a 2:1 crew to passenger ratio, it offers high levels of service in a relaxed atmosphere and its small size means it can call at small marinas and secluded islands that are inaccessible to larger vessels.

Running on Waves is the sole ship operated by a company of the same name and attracts international passengers from countries including Europe, the U.S., Canada and Australia.

Powered by sail wherever possible, the three-deck ship is decorated in a retro style in keeping with its maritime heritage. Gleaming brass, teak, mahogany and leather fixtures and fittings adorn the cabins and public areas and walls are decorated with nautical paintings by modern-day artists. Every winter the vessel homeports in Cyprus and undergoes an annual refurbishment.

All cabins have bathrooms with showers and marble basins, air-conditioning, fridge/mini-bar, safe, hair dryer, telephone, robes and slippers. The satellite TV system screens additional information including webcam footage from two underwater cameras and a camera mounted on one of the masts, navigational data and the daily programme for onboard activities and ports of call.

The restaurant, large enough to seat all passengers in one sitting, and the bar are situated on the Main Deck. Meals -- buffet and a la carte -- showcase Mediterranean cuisine with a Greek influence, such as seafood and traditional Greek coffee. Dietary requests can be catered for.

The Sun Deck features a large sunbathing area with loungers and shady spots with comfortable seating. Also on the upper deck is a small plunge pool, accommodating up to six people, a massage room, smoking area and observation deck above the bowsprit. Tours of the bridge can be arranged on request.

When the ship anchors the stern is lowered to create a watersports deck for swimming, snorkeling, diving, windsurfing, kayaking, fishing and other activities. On board the entertainment is low-key and includes traditional pursuits such as knot tying classes, climbing the mast, sail setting and star gazing. There are also exercise sessions, wine tasting, cookery demonstrations, napkin and towel folding classes, films, disco and karaoke nights. Fares include all meals and bar snacks, 24-hour tea, coffee and water, watersports equipment and Wi-Fi. Extras include shore excursions, alcohol and other bar drinks, diving equipment, water skis and wakeboards, massage treatments, laundry and discretionary gratuities (recommended 8 Euros per person, per day).

Between April and September Running on Waves sails on a variety of seven-night cruises to Greece and beyond, including passages through the Corinth Canal. There are also themed cruises, such as golf, and short seasonal repositioning cruises that include ports of call. The ship can also be fully chartered.