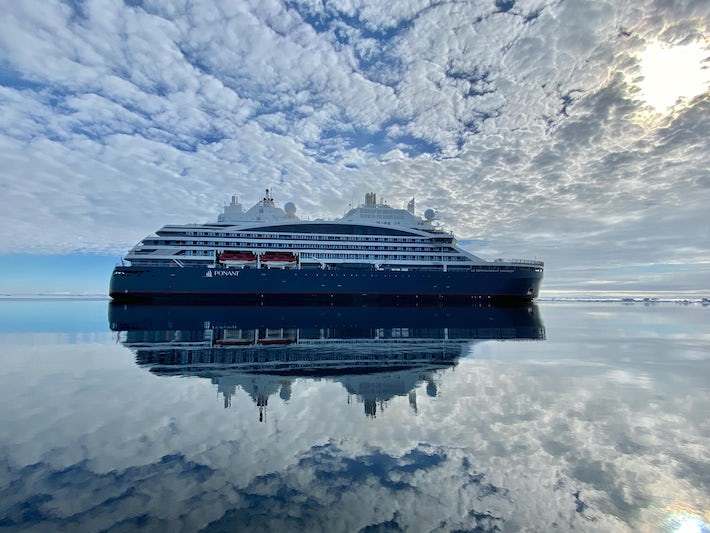 Ponant’s newest expedition ship blends understated elegance with the power to pulverize sea ice. At 492 feet long and 92 feet wide, the 123-stateroom vessel is larger than the line’s other ships, creating space for amenities not typically found on expedition cruisers.  These include an indoor resistance pool, two smaller outdoor pools, and a promenade that wraps around the entire ship. Food and drink are topnotch, with free-flowing French wines, Champagne and spirits included (except premium vintages) in the fare. The fine-dining restaurant is the first at sea to claim the Michelin-starred Alain Ducasse name.

With its Polar Class 2 designation, the ship can delve deeper into arctic waters than Ponant’s four ice-class ships. That’s partially the reason for higher fares on the new ship. But it also boasts a higher staff-to-passenger ratio, roomier public areas and luxury perks that trump the line’s earlier vessels.

board – even the drinking straws are glass. Drinking water comes from an onboard desalinization system.  Among other innovations: a system for recovering waste heat, and an advanced wastewater treatment system.

As on most expedition vessels, onboard entertainment tends toward lectures related to the destination. So if lavishly produced stage shows and a party-hearty bar scene are your idea of shipboard entertainment, this isn’t the ship for you.

A small smoking area is at the rear of Deck 5, but all other areas are smoke-free.

Named for French explorer Jean-Batiste Charcot (aka “the gentleman of the poles”), Ponant’s 13th vessel has in its first year at sea already racked up a number of firsts, including being the first French ship to reach the geographic North Pole. Décor is sophisticated and subtle. Taupes and grays dominate the color scheme, and the use of wood, leather and other materials add texture and depth to the interiors. Artworks in stone, glass and wood by more than 30 artists adorn the public spaces. Dominant among them is a 30-foot-tall LED screen rising from the lobby on Deck 5. Its dreamy, ever-changing digital images undulate to the accompaniment of ambient music.

Public areas are concentrated on Decks 5 and 9, site of both the fine-dining and buffet restaurant, an outdoor grill, and two spacious lounges. The Main Lounge on Deck 5 is the spot for afternoon tea, plus musical performances and dancing on some evenings.  On Deck 9, the Observatory Lounge brings the outside in with wrap-around windows. Also on this deck is a lovely windowed, winter garden with a heated indoor resistance pool. Two compact outdoor heated pools are at the rear of the deck. There’s also outdoor dining and a bar here.

Additional outdoor space is on Deck 6, forward, which sports a helicopter pad. The chopper is tucked away below the deck and used for wildlife scouting and emergencies, not sightseeing. The area also functions as an outdoor observation space.

A laboratory on Deck 3 caters to visiting scientists engaged in polar, climate and other research projects. On occasions, it’s possible for passengers to assist.

Though not as roomy as basic cabins on some luxury ships, the entry-level Prestige Staterooms,  at 215 square feet (plus another 53 square feet on the balcony), are quite spacious. Niceties in all rooms include WiFi, 24-hour room service, super-luxe Diptyche Paris bath products, bathrobes, slippers, a Dyson hairdryer, minibars stocked with juices, soft drinks and spirits, Nespresso coffee maker, Bose bluetooth speaker and individually controlled thermostats. All cabins have roomy glass showers (some suites add a separate Balneo bathtub) and, in the French tradition, the toilet is tucked within its own doored compartment.

All staterooms and suites are on Decks 6, 7 and 8 and have both American and European-style outlets. Big-screen satellite TVs have English-language news and movie channels.  The king beds in most cabins can be converted to two twins. There’s also a choice of pillows.

All but the Prestige Staterooms get the “suite” moniker, though the ship’s 50 Deluxe Suites, at 301 square feet, are similar to the basic Prestige rooms – just slightly larger.

The 17 Prestige Suites are, essentially, two joined Prestige staterooms, and are a good choice for families or couples traveling together.

The ship’s 14 true suites, including a palatial owners suite with epic 2000-square-foot  wraparound terrace, are designated in an additional four categories. They come with butler service, separate lounge area, separate shower and bathtub, daily canapes, and the use of a Samsung tablet and binoculars, among other extras.

Nowhere is the ship’s French nature more detectable --- and delectable -- than in its dining rooms. We never had a disappointing meal. Even at the casual outdoor grill, Inneq (Innuit for fire), the food was wonderful. French wines are served with meals, and the house Champagne is Veuve Clicquot.

With its crisp blue and white tablecloths and elegant décor, it’d be easy to mistake the buffet restaurant, Sila (Innuit for Sky), as a fine-dining venue. The buffet is tucked out of sight between two dining areas and serves a bounty of food.

But the piéce de résistance is Nuna (Innuit for Earth), the Alain Ducasse-affiliated restaurant on Deck 5. The Michelin-starred chef has overseen the creation of the menu, which touts classic French food.

For the most up-to-date testing, masking, and vaccination requirements aboard Le Commandant Charcot, please refer to the Ponant website.

Quintessentially French in food, drink and décor; scientific bonafides with an onboard laboratory

Limited scope of onboard entertainment

Costs Included in the Cruise Fare

Costs Not Included in the Cruise Fare

Well-traveled and well-healed passengers. On a ship that sails the Earth’s most remote regions, it stands to reason that the passengers have already seen a good bit of the world. Ponant is a French line, but also has been targeting a more international clientele, with considerable success.

At times, the ship is chartered by a tour operator, which narrows the onboard demographic. On regular cruises, announcements are made in both French and English. For lengthier presentations and shore excursions, groups are segregated by language.

Where does Le Commandant Charcot sail from?

Where does Le Commandant Charcot sail to?

How much does it cost to go on Le Commandant Charcot?

To the Ross Sea and Beyond

Incredible ship from top to bottom.The food was, by far, the best I have ever had on any ship.Read More
Traveler4k