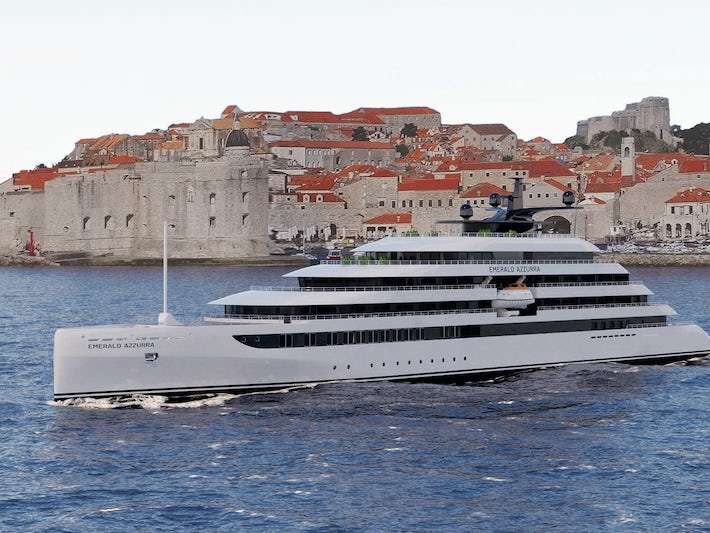 When it debuts in March 2022, the 100-passenger Emerald Azzurra will become the first oceangoing yacht-style cruise ship for river line Emerald Cruises, which is part of the Scenic Group.

Sailing for the newly formed brand Emerald Yacht Cruises, the luxury vessel has been custom-designed to cruise the waters of the Adriatic Coast, Red Sea and the Mediterranean. In 2023, it will be joined by sister ship Emerald Sakara, which will sail to the Seychelles, Black Sea and Middle East.

The first luxury yacht to be constructed at the Ha Long Shipyard in Vietnam, Emerald Azzurra will feature an abundance of onboard space for the 100 passengers who will receive high levels of personal service from the 64-strong crew. The size of the vessel means it can visit ports that are inaccessible to larger cruise ships. It will also carry three tenders and two Zodiacs for shore landings in small harbours and destinations without proper port facilities.

There will be cabins across six categories and 88 percent, with the exception of the 182-square-foot Oceanview Cabins, will have balconies. The rest of the cabins are suites, leading in with Balcony Suites that measure 285 square feet. Deluxe Balcony Suites are 382 square feet and there are also 699-square-foot Yacht Suites and Terrace Suites, which measure 863 square feet. The latter two both have private terraces. The largest staterooms on Emerald Azzurra are the Owner's Suites which measure 1,162 square feet and have a separate bedroom and lounge area.

A highlight of the ship will be the aft marina, from which passengers can take part in a variety of water-based activities including paddle boarding, kayaking and snorkeling. There will also be Sea Bobs that propel passengers through the water, and a water trampoline. Emerald places a big emphasis on active cruises and there will be early morning yoga sessions on the Observation Deck and a wellness center complete with gym and spa.

Public areas on Emerald Azzurra include an Observation Lounge, with a telescope, board games and library. The main restaurant is Reflections, open for breakfast, lunch and dinner, with buffets at breakfast and lunch and an a la carte menu in the evening. Food will take its inspiration from Mediterranean cuisine. Bars include the Sky Bar on the Sky Deck for sunset cocktails. In the evening the Observation Deck will turn into an outdoor theater, with Movies Under the Stars.

In addition to complimentary wine, beer and soft drinks at mealtimes, gratuities are also covered in Emerald Azzurra's inclusions.

Emerald Azzurra Will Feature a Wide Choice of Excursions

Included in the fare are EmeraldPLUS excursions, covering city and town tours and cultural experiences ashore. The EmeraldACTIVE excursions, which are also included, consist of guided bike rides, hikes and other activities to provide an alternative perspective on different destinations. Passengers can also book DiscoverMORE excursions, which are available at extra cost. These tours offer an increased level of immersion into an area's history and culture, such as a guided walking tour of Mykonos town with a wine tasting, Bedouin experience in Hurghada and a snorkel trip to Ras Mohammad National Park near Sharm el-Sheikh.

Want to Be Onboard First? Emerald Azzurra's Maiden Voyage Is March 11

Emerald Azzurra sets sail March 11, 2022 on its maiden voyage, a seven-night 'Best of the Red Sea' round-trip cruise from Aqaba in Jordan. Ports include Nuweibah, Safaga and Sharm al-Sheikh in Egypt and Eilat in Israel.

Emerald Azzurra Itineraries Will Focus on the Mediterranean and Adriatic

After its maiden cruise, Emerald Azzurra will sail a second itinerary in the Red Sea before transiting the Suez Canal ahead of its inaugural summer 2022 season in the Mediterranean and the Adriatic. Destinations include Greece, Montenegro, Italy, France, Cyprus, Turkey, Malta and Spain.

Emerald Azzurra is 5,300 gross tons and carry 100 passengers at double occupancy, with 68 crew.

Get Emerald Azzurra price drops
250,000+ people have entered their email

Find an Emerald Azzurra Cruise from $3,836