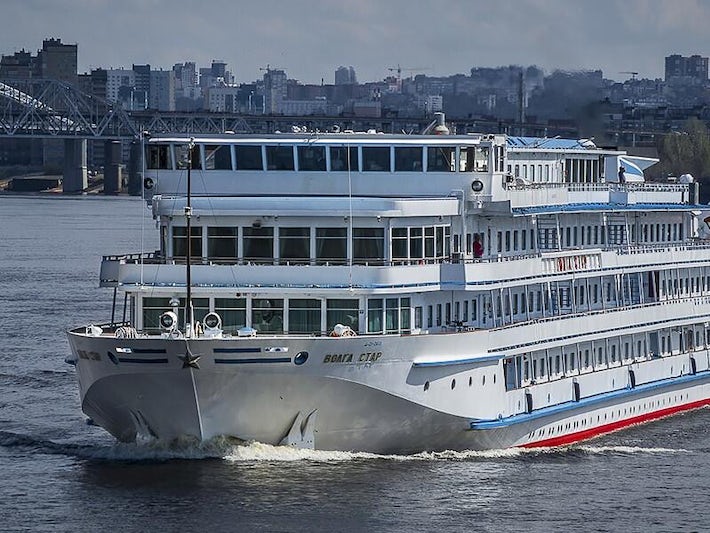 The 200-passenger Volga Star is a traditional Russian river cruiser that has been updated and enhanced since it was first introduced in 1983. While it is similar to many other Russian river cruise vessels in its exterior appearance, it offers a larger proportion of suites than many other ships plying the Volga, along with traditional decor that revolves around shades of brown and earth tones, complete with plenty of carved walnut woodwork throughout.

Cuisine onboard Volga Star is a mixture of traditional Russian specialties and international favorites. Beer, wine, and soft drinks can be purchased for an additional cost.

Volga Star offers a wide assortment of cabins onboard, all of which feature river views. There is a larger proportion of suites and junior suites on this ship than on many other Russian river cruise vessels plying the Volga; noteworthy if additional living space is important. All cabins onboard offer a flat-panel television, phone and private bathroom facilities. The power onboard is 220V two-pronged European-style.

Twin Standard cabins are the smallest onboard, coming in at just 97 square feet. These offer a picture window that opens, long with two pull-down beds that convert to couches during the daytime. A small vanity area and mirror is located adjacent to the bathroom.

Deluxe Staterooms are 172 square feet and offer substantially more living space than the Twin Standard and Twin Comfort categories. All 10 Deluxe Staterooms come with a queen-sized bed that can convert into two singles upon request. Imperial River Cruises notes that it "might" be possible to put a third person in the cabin if they are comfortable sleeping on the couch, which does not pull out into a bed.

Junior Suites are numerous aboard Volga Star, with eight residing on the Boat Deck and the remaining 16 being located on the Upper Deck. These rooms offer two panoramic windows that can open to let in fresh air, along with a queen-sized bed that can convert to two singles. As with the Deluxe Staterooms, Imperial states that a third person can be accommodated if they sleep on the (non-pull-out) couch.

Mini Suites are located at the back of the ship and are actually comprised of two Twin Comfort rooms: one that has been left as is with its two pull-down beds and an adjacent room offering a queen-size bed that can convert into two singles upon request. Because of this, these 226-square-foot rooms are designated as "family cabins" and can sleep up to four.

Suites measure 269 feet apiece. There are two full Suites aboard Volga Star, both situated at the forward end of the Boat Deck. These offer separate living and sleeping areas, along with a bathroom equipped with a whirlpool tub for added luxury.

Up top, Volga Star has a small bar and lounge along with outdoor seating and plenty of viewing space for taking in the sights of Russia's most famous waterway.

Entertainment aboard Volga Star revolves primarily around enrichment activities that include Russian language lessons and relevant destination lecture topics. Nightlife tends to be subdued, with most passengers turning in early after a long day of explorations ashore.