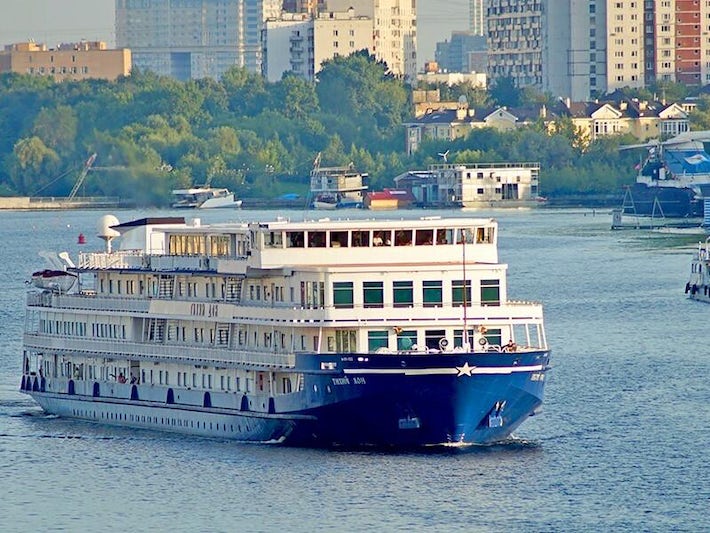 Built in 1977, Tikhi Don is a classic Russian river cruiser that has been renovated over the intervening years to offer more contemporary decor. The ship also offers slightly larger staterooms, on average, than many of the other ships in the Imperial River Cruises fleet, though no cabins with balconies are available onboard.

A 2015 refit updated the ship's decor and added a passenger elevator, and cabins were outfitted with both North American 120V outlets and European 220V outlets -- another rarity on the Volga.

Onboard, a mixture of Russian specialties and international cuisines are served up for breakfast, lunch and dinner in the ship's main dining room. Alcoholic and nonalcoholic beverages can be purchased at an additional cost.

Twin Deluxe cabins are the most numerous onboard. Measuring 145 square feet, they offer a small sitting area along with a picture window that can be opened. Each room has double beds that can be separated upon request, along with a wardrobe and plenty of storage options.

Twin Deluxe Plus staterooms are 153 square feet and offer slightly more space over the Twin Deluxe cabins, along with the same amenities.

Junior Suites measure 167 square feet and offer increased living space and two panoramic windows that can open, along with double beds that can be separated on request. A small sitting area with two chairs and a table is situated by the windows, adjacent to a vanity area. There are four Junior Suites onboard, split between the Boat Deck and the Upper Deck.

Panorama Suites are the top-level accommodations aboard Tikhi Don. Located at the forward end of the Upper Deck, these two suites measure 183 square feet and offer five large windows, though these do not open due to the forward location of the rooms. A sitting area, vanity area and ample storage space complement the room, which also features a double bed that can be separated into two twins upon request.

Tikhi Don's uppermost deck features a large conference room and lounge area with panoramic windows. This is primarily used for onboard lectures and other functions. Outside on deck, passengers can find plenty of space to take in the sights of the mighty Volga.

Entertainment onboard Tikhi Don typically revolves around enrichment activities, such as language lessons and destination-relevant lectures. Nightlife is subdued, with most passengers turning in early after a long day of exploration ashore, though conversation and nightcaps can always be found in one of the ship's bars and lounges.

Be the first to know when Tikhi Don prices drop so you can book with confidence.