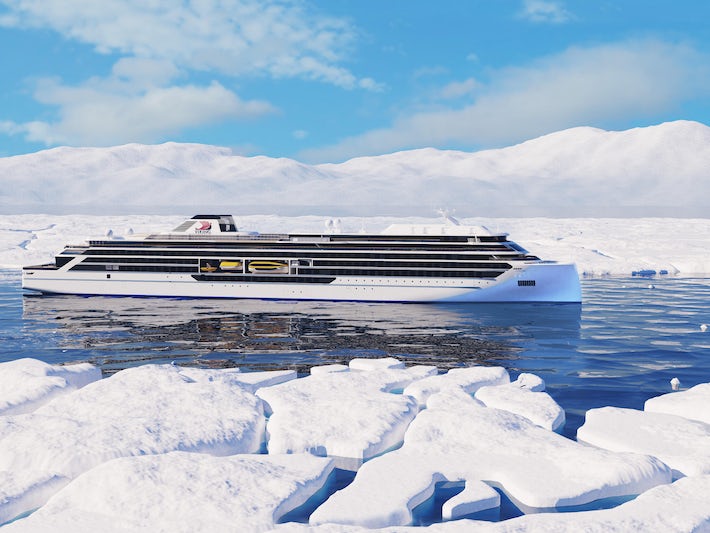 Building on the success of Viking's ocean cruising fleet that began with the introduction of Viking Star in 2015, Viking expands into the world of expedition cruising with its first Viking Expeditions ship, Viking Octantis, in 2022. A sister, Viking Polaris, will join the new Viking Expeditions fleet later this year.

While all expedition ships carry field experts and lecturers, Viking Octantis has a new take on the practice with The Laboratory, a space where passengers can interact with Resident Scientists and have the chance to do field research projects on shore (while there have been some research vessels in the past that have taken passengers, these tend to be very niche products).

Another space that guests will appreciate is The Hangar, an enclosed marina where people can board RIBs (Rigid Inflatable Boats) and Zodiacs from a stable surface, as opposed to getting on them outside in the elements and choppy water.

Pools are hard to get right on expedition ships, but Viking Octantis is making what looks to be a good stab with its Aquavit Terrace. The indoor-outdoor space with a retractable glass dome will have three different temperature-controlled pools, including one where you can swim between inside and fresh air.

Another feature will be Finse Terrace, an outdoor lounge area (named for Viking's Executive Vice President Karine Hagen's dog, Finse). This space will have comfy couches and warming lava rock "firepits" -- as close to fire as you can get on a ship -- where people can view glaciers and nature outside.

Care has been taken to ensure that many of the most popular deck plan features of Viking's oceangoing ships have been added to Viking Octantis and Viking Polaris. These include a dedicated library (though we'd expect the ship to have books throughout, similar to the line's existing ocean ships), a spa with a Thermal Suite and fitness center, the popular forward-facing Explorers' Lounge, the Aquavit Bar and the warm and inviting Living Room concept that, on Viking's ocean ships, forms the basis of the vessel's lobby and interior atrium.

Fares, too, follow the Viking formula with shore excursions (including rides in one of the ship's six-person submarines), beer and wine at lunch and dinner; Wi-Fi; self-service laundry; and 24-hour room service included in the price. Viking Expeditions guests will also receive charter flights for hard-to-reach places included in the fare, as well as use of Viking expedition gear such as skis, snowshoes and trekking poles. Passengers on polar trips will also receive a Viking Expedition jacket -- saving suitcase space, on the way there, at least (people can keep it) -- and an expedition kit with use of boots, binoculars and waterproof pants.

Restaurants on Viking Octantis Include Line Favorites Such as Mamsen's

Beverage policies will be in line with Viking's existing river and ocean vessels, which offer complimentary beer, wine and soft drinks with lunch and dinner.

Room service will be complimentary and available 24 hours.

Cabins On Viking Octantis Cabins Will Have 'Nordic Balconies'

All 189 cabins onboard Viking Octantis will offer ocean views and what Viking Expeditions is calling a "Nordic balcony." It's essentially a large window that can partially drop down and turn part of the room into an open-air space with the push of a button. The windows will have a ledge where you can stabilize a camera or binoculars.

Nordic Balcony and Deluxe Nordic Balcony cabins will offer 269 square feet of living space and will make up the bulk of accommodations aboard Viking Octantis. The rooms will have a king-sized bed and a bathroom with a glass-enclosed shower, heated bathroom floors and anti-fog mirrors. There will also be a floor-to-ceiling "drying closet" where circulating warm air dries clothes and expedition gear.

A total of 20 Nordic Penthouse Suites will be featured onboard, with 334 square feet of living space. Other suites include the 409-square-foot Nordic Junior Suites (26); four 657- to 667-square-foot Explorer Suites; and a single 1,448-square-foot Owner's Suite.

Nordic Junior Suites are 322 square feet, and have additional storage and seating; an expanded bathroom with extended shower and double sinks; a fully-stocked mini-bar replenished daily, and perks that include welcome Champagne, laundry and shoeshine service and priority restaurant reservations. The 580-square foot Explorer Suites are true suites, with two separate rooms and a full outdoor veranda, as well as the Nordic Balcony. There's also a special space called the Explorer Suites Garden on the top deck, just for passengers in this class.

Finally, the 1,223-square-foot Owner's Suite has two separate rooms, including a living room with a six-seat dining table. It also has a 792 square foot private garden with a traditional Norwegian hot tub and outdoor dining table.

Viking Octantis Will Have Full Expedition Team and Lectures

Viking Octantis will feature daily expedition briefings and onboard lectures. The ship plans to have more than 25 onboard experts per journey, including biologists, botanists, geologists, glaciologists, oceanographers, ornithologists, polar experts and researchers. The enrichment partnerships are being developed with the Scott Polar Research Institute at Cambridge University, and The Cornell Lab of Ornithology, as well as the National Oceanic and Atmospheric Association.

One unique feature to Viking Octantis (and its sister) will be a 430-square-foot working space called The Laboratory, equipped with wet and dry lab facilities; a sample processing area; a fume cupboard, freezer and cold storage; comprehensive microscope optics and bench space for instruments. Passengers will have supervised access to The Laboratory and can also help the scientists with primary research -- something that's rare on an expedition cruise. Examples might include monitoring birds to help identify migratory patterns or helping scientists collect samples. In the Great Lakes, NOAA scientists may join expeditions to conduct climate change studies.

The main lecture hall on the ship will be called The Aula, a panoramic room at the back of the ship. Modeled after the University of Oslo hall where the Nobel Peace Prize is awarded, The Aura can seat half of the ship's guests at once, with floor-to-ceiling windows offering 270-degree views.

Viking took delivery of Vikiing Octantis on December 22, 2021 and embarked from Norway on its maiden voyage toward Argentina.

The ship will be named in New York in April 2022, with the godmother Liz Arnesen, a Norwegian explorer and educator.

Get Viking Octantis price drops
250,000+ people have entered their email

Find a Viking Octantis Cruise from $5,995